Look What We Did: “In the Quiet of the Night”

One writer and one director share the stress and joy of creating and putting on a 10-minute play in 24 hours. 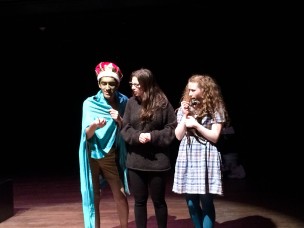 “One Day Plays” is an event held every semester in which students write, direct, and perform sets of 10-minute plays within 24 hours. After participating in two similar events in high school, I have been involved in every production of the One Day Plays during my time at Wesleyan.

This semester, I was a writer. It was the first time I’d written a script specifically for the actors I cast. I went into the night planning to do a surreal comedy based on Abraham Lincoln, but I came out with something far more inexplicable.

It soon came to me that I was going to write an alien abduction comedy titled “In the Quiet of the Night.” Two sisters (Alison Silverstein ’18 and Natalie Bina ’18) encounter a peculiar alien by the name of Blorgthax (Ali Jamali ’17), who takes them back to his spaceship. My play explored family loss, science, and loneliness.

Once the writers had their cast, they scurried to various regions of the ’92 Theater and spent the next several hours pouring their blood and tears into a 10-page script by 5 a.m. I found an alcove at the top of Zelnick and began a cycle of typing, reading over, and pacing annoyingly all over the building. This cycle was briefly broken by a very necessary Whey Station break.

This was the toughest play for the One Day Plays I have ever done. For one thing, I did not know the ending before I reached it. For another, I knew two of the actors personally and the abilities of the third. I wanted to be able to give each of them a satisfying script that played to their strengths because that should be one of the points of One Day Plays: giving opportunities to actors that they are not usually given. And whether or not I accomplished that, all three cast members, thanks in no part to the directing of Dan Bachman ’17, took the script and gave incredible performances (technically, four: Dan Storfer ’15 also had a cameo). In particular, Jamali’s teeth licking and dancing will haunt my nightmares.

Ultimately, I would just like it to be known that my script made absolutely no mention of shirtlessness or coconut bras.

Wesleyan’s Second Stage, as a whole, is pretty good at creating an inclusive space. The number of shows, and the open nature of audition, at least gives everyone on this campus the opportunity to participate in theater should they want to. However, it is still competitive, and people get shut out. I should know. I’ve been one of them. For us (and everybody else) there are the One Day Plays. They’re one of my favorite things that happen on this campus; one day in which a large group of people come together and, without any real politics or ego, create a bunch of really fun plays.

This year was my directorial debut at the One Day Plays. After a 6 a.m. survey of the seven scripts provided to us, I ended up with a little play about sisters, horses, and alien abduction called “In the Quiet of the Night.” Written by Will McGhee ’17, this was a really fun script with a lot of room for me to play with.

My actors, Alison Silverstein ’18, Natalie Bina ’18 and Ali Jamali ’17, were all game from the start. Every decision I made (having most of the sound cues come from the actors themselves, Ali’s alien costume prominently featuring a coconut bra) they rolled with and performed with aplomb. At one point, one of my actors suggested he go shirtless, and, boy, was he. Most of the costuming and delivery came directly from my excellent cast and Will’s brutally enjoyable script; I just guided it. After 12 hours of rehearsal, conversation, memorization, blocking, and reblocking, we had a show. A weird and wonderful thing.

Every time I do the One Day Plays, they’re a little bit different and a little bit better. Here’s hoping that Second Stage keeps making them happen.