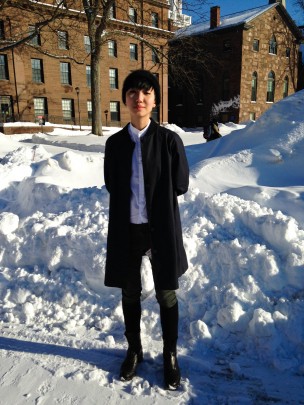 According to her blog (Marco + Kaitlin), Kaitlin Chan ’17 “likes clothes and takes photos.” She is a photographer and graphic designer, exploring her passions for studio art and East Asian Studies. Chan came to Wesleyan from Hong Kong, but her androgynous, tailored style is more reminiscent of the monochrome-loving New York models that she draws inspiration from. Chan was kind enough to speak candidly with The Argus about all that she likes in the fashion world as well as the fashion scene at Wes.

The Argus: To what extent you consider yourself interested in fashion?

Kaitlin Chan: Pretty heavy extent! As a woman, growing up, I think that at a certain age, like around sixteen or seventeen, there was a little bit of societal pressure to feel bad if you cared about your looks…. But I don’t think it’s superficial to enjoy dressing yourself because it’s fun, and it can help people connect, and it’s helped me make new friends, and I don’t think that’s a bad thing, ever. It gives you a little boost, a little kick in the day.

A: How long have you been interested in the way you dress?

KC: When I look at pictures of myself from when I was seventeen/sixteen, I’m really disgusted. But I have to say that was honestly a big starting point. But then coming to Wesleyan was huge because people at Wesleyan really try! In Hong Kong, typical Cantonese fashion style would be a really big, oversize, white character T-shirt with a big Asian character on it, an anime character or a Hong Kong cartoon, and these sort of really creasy jeans with big neon sneakers. And that was so not my look…. For me, personally, even though there’s great pockets of style in Hong Kong, the overarching style, I didn’t feel like it spoke to me. And then I came to Wesleyan, and [there is] big diversity of style, and that was more exciting.

A: So do you think you’re more inspired by style at Wesleyan than you were in Hong Kong?

A: Describe your personal style in three to five words…

A: What do you like most about style at Wesleyan?

KC: What I like is that a lot of people are kind of happy about it. And they’re sort of honest about it, and they won’t be like, “Oh yeah, I just threw this on, it’s whatever.” There’s not this huge, cynical disaffect. People are like, “Yeah! I just found this coat in my grandma’s attic, and I’m really excited about it!” or, “I put all these patches on my jacket by myself!” I love when people care about stuff. That degree of thought and effort is really sweet, and it makes me happy.

A: How has your style changed, if at all, since you came to Wesleyan?

KC: It’s fun being risky, and people aren’t as risky at home. Perhaps because your parents and guardians are around—relatives, societal pressure—especially somewhere like East Asia, where, if I can speak broadly, homogeneity is kind of important, especially in the workplace. But, yeah, [at] Wesleyan, I can wear dark lipstick, or just do big things, like wear a cape. [Here] it’s a nice thing, not a weird thing.

A: How would you say your relationship with photography informs your love of fashion?

KC: My love of photography kind of, like, sprung out of losing my dad at an early age, and feeling like his albums were the only way I could get to know him. Especially his fashion in the albums really spoke to me, because I think that if you’re looking at someone in a picture, one of the ways you can guess things about them, or learn more about them is through clothing. So I only really started taking photos a ton at Wesleyan, and it was always really casual, and it was always people hanging around me. And then I realized there were these really fleeting, beautiful things in the way people moved, and especially in the way they dressed. So I try and dress like every day’s a movie, and I’m not starring in my movie, but a sub-character in a movie. When I’m photographing, it’s like they’re production stills from that movie.

A: Would you ever be interested in pursuing fashion photography?

KC: I’ve totally dreamed about it or told people I’d do it at parties. But in this increasingly fearful economic state that America’s in, I don’t think that that’s what I’m most ready to do for myself. Have you heard of i-D magazine? They were just a hugely influential magazine for me. Because firstly, it was the first Western-language magazine I found which had actively used people of color as models…not even in a Toyko story set, or a Great Wall of China set. They’re actually being photographed because they’re like, “Oh yes, people of color can be stylish and interesting without having to contextualize their race all the time.” And it was very exciting for me; I love i-D.

A: Do you have any other major sources of style inspiration?

KC: There’s this young female blogger, Yan Yan Chan, and she just has an Instagram and keeps up a casual blog. She dresses really sweetly and excitedly, so there’s definitely a feminine edge to her clothing, but it’s also often distinctly monochrome and geometric, and I love that look about her. Chiharu Okunugi is another model I follow…. I know it’s really creepy, but I think there’s totally a bunch of us: people who look up models doing off-duty shoots.