“Our assessment is that they’ve either determined that their claim never had any basis…[or] that it just wouldn’t be worth [pursuing] given how they’re being treated in the PR arena.”—Peter Frank ’12 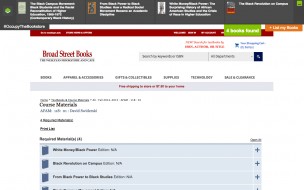 When Texts.com CEO Peter Frank ’12 first promoted his fledgling company on Foss Hill with the lure of 60 free pizzas, he never anticipated the success and name recognition that his business has seen. Since the inception of the site, its goal has remained fairly simple: to provide students everywhere with the opportunity to find textbooks at the lowest possible cost so that a quality education is viable for those of any socioeconomic status.

However, a new programming development in the company’s online presence recently became the target of intense criticism by the multibillion-dollar college textbook retailer Follett Corporation, the University’s textbook retailer. As a result of Follett’s extensive influence in the college textbook industry, its threat to take legal action against Texts.com has catapulted the up-and-coming website into the spotlight.

At the center of the controversy is a Texts.com Chrome plugin designed for comparing book prices across retailers. According to The Wall Street Journal (WSJ), the feature known as “OccupyTheBookstore” is currently active on over 1,700 college bookstore websites, and it allows students to find the cheapest prices on the books they need. As a result, potential Follett customers could possibly be steered away from its full-priced books toward more economical options with the aid of the Texts.com plugin. With the apparent fear of losing business, Follett threatened legal action if the plugin was not soon removed from its sites.

On Jan. 2, Frank and Texts.com CTO Ben Halpern opened up a Reddit AMA (“Ask Me Anything”) regarding the controversy, further galvanizing support and encouragement for the site. The thread currently has over 1,700 comments with a 97-percent upvote statistic.

“We have not received any new contact from [Follett] since we did the Reddit AMA,” Frank said in an interview with The Argus. “Our assessment is that they’ve either determined that their claim never had any basis…[or] that it just wouldn’t be worth [pursuing] given how they’re being treated in the PR arena.”

Follett’s Director of eCommerce Becky Chandler, who initially reached out to Texts.com, declined an interview with The Argus concerning the matter. According to a WSJ blog posting by Rolfe Winkler, the last direct legal threat that the company received was an email from Chandler in September, which stated that OccupyTheBookstore is an entity that is “effectively changing the presentation of the information on the screen,” inevitably leading to increased consumer knowledge concerning the differing prices of identical books across a wide array of retailers.

“There are a number of companies that do price comparison…and by virtue of being price comparers and by virtue of being aggregators, we’re always gonna be a little similar [to them],” Frank said. “However, we’re forgoing affiliate commissions in order to satisfy students, and we are going to increasingly differentiate by integrating open-source textbooks…and really any source that could help students save money even if it means we won’t drive a commission on that, we’re happy to do it. So our real differentiator is that we’re always gonna maximize student value even when we don’t necessarily profit.”

Chegg Inc. is one such website with a similar goal of making the supplies required in higher education more cost-efficient for students. Chegg Vice President of Corporate Communications Usher Lieberman and Vice President and Business Leader for College Services John Fillmore emphasized the heightened risk that a textbook company with competitive prices runs when it comes to the likelihood of legal trouble, even after the company has firmly established itself as a major player in the industry.

In the case of Chegg, not even 10 years of continued growth and prosperity could completely stave off threats of this nature.

“Last fall, we got a legally worded letter from Southern Connecticut State University because they were claiming that we were actively marketing on their campus and that that was a violation of the contract that they have with their bookstore,” Lieberman said. “Our CEO [Dan Rosenzweig] wrote a LinkedIn piece [regarding the matter], and that was the last we ever heard about that.”

With respect to his opinion of the controversy surrounding the Texts.com plugin, Fillmore voiced his support for the company’s willingness to put as much information as possible into the hands of consumers, allowing them to make more informed choices when it comes to financing their education.

“My first [piece of advice to Texts.com] would be to enjoy the free publicity that they’ve gotten from all of this,” Fillmore said. “They obviously have to be doing something that some of the big bookstores see as a threat, which means they’re doing something right. It’s why we get the negative advertising and people go out and attack Chegg…. It’s because we’re a threat to the bookstores.”

Though the plugin does appear on the sites of well over 1,000 bookstores, it does not directly interfere with any web servers, which is the reason why Halpern and Frank were initially surprised by Follett’s threat. Currently, the plugin is functional on the websites of many college bookstores across the country.