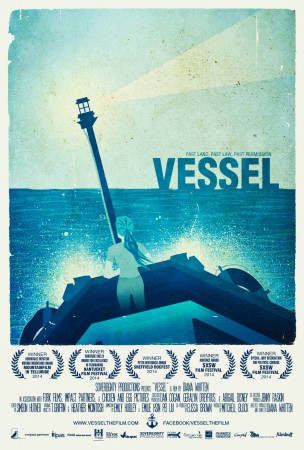 “Dear Women on Waves: I’m not married and am pregnant. I cannot have a baby. I heard you can drink bleach, but I’m scared it will kill me. My sister told me about your ship. Can you help me?”

Superimposed over an animated ocean, this letter marks the beginning of “Vessel,” a documentary by Diana Whitten that profiles Women on Waves. Since 2001, the nonprofit organization has been sailing to countries with restrictive abortion laws and administering medical abortions at sea. The film, which premiered at South by Southwest in 2014 and was recently released online and in select theaters, examines the organization’s literal and figurative journey, focusing in particular on Rebecca Gomperts, the Dutch physician who founded Women on Waves. Whitten’s debut documentary is a fascinating glimpse at a segment of the international abortion rights movement, yet ultimately leaves too many questions unanswered, hampering the organization’s efforts toward transparency.

The “abortion ship,” known first as the Aurora and then the Langenort, takes advantage of a legal loophole by performing medical abortions 12 miles offshore. The ship is registered in the Netherlands, where abortion is legal up until 24 weeks, and the laws of its flagship country apply when in these international waters. On board the ship, women can receive a medical (non-surgical) abortion up until nine weeks of pregnancy by taking the drugs mifepristone and misoprostol, which together are 95 percent effective at inducing a miscarriage. According to Gomperts, a medical abortion cannot be distinguished from a natural miscarriage after the fact; thus, if a woman develops complications upon returning home, she can safely retrieve medical treatment from a hospital in her home country so long as she does not reveal that she took pills with the goal of inducing abortion.

The film is peppered with compelling statistics that make the case for safe and legal abortion; among them is the fact that 1 in 300 women die each year from illegal abortions while 1 in 500,000 die from medical abortions, which are safer than giving birth and as safe as a natural miscarriage. These, coupled with heart-wrenching messages from women seeking the services of Women on Waves, lay both the logical and emotional groundwork for the action that unfolds throughout.

Women on Waves made its maiden voyage in 2001 to Ireland, where 120 women immediately expressed interest in receiving a medical abortion onboard. At the time of departure from the Netherlands, Gomperts was still waiting on approval for an abortion license; when the anti-abortion cause caught wind of this, it brought about a public media scandal that ultimately forced Gomperts and her team to leave Ireland without performing a single procedure. They later learned that she did not need that specialized license to perform abortions up to nine weeks, and the team made a successful journey to Poland in 2003.

When the Langenort attempted to dock in Portugal in 2004, it was blocked by Portuguese war ships, with the government claiming that its presence constituted a threat to national security. Unable to find any local ships willing to ferry women out to where the boat was anchored in international waters, Gomperts shifted tactics: she appeared on Portuguese television instructing women on how to induce an abortion by themselves by taking 12 tablets of misoprostol, which is 80 percent effective on its own, and safe to take without visiting a physician.

From this point on, “Vessel” largely focuses on Women on Waves’ efforts to raise awareness about misoprostol’s ability to induce abortion. The drug, which is on the World Health Organization’s list of essential medicines, can also be used to treat postpartum hemorrhage, induce labor, and treat gastric ulcers; for those reasons, it is more accessible than mifepristone, though it does typically require a prescription.

Here the film begins to falter. It is left unclear how women can procure the drug without a prescription, or, if they do receive a prescription, what legal risks that poses, for either them or for their physicians. Whitten includes a scene fairly late into the film in which she depicts volunteers boarding the ship along with women seeking abortions so as to protect the latter’s identities, but it would have been interesting to know more about the non-medical risks at stake and how the organization combats them.

Whitten devotes a brief segment to Women on Web, the sister organization of Women on Waves that sends misoprostol by mail to women in areas where they cannot procure it, yet she leaves unclear what legal loophole allows the volunteers at Women on Web to prescribe and distribute misoprostol overseas.

Perhaps the largest unanswered question is whether Gomperts’ efforts will ultimately help or harm the greater cause. When Brazil caught wind of what Women on Waves was advocating, it increased restrictions on misoprostol, and many women in Brazil found that their packages from Women on Web never arrived. It is easy to imagine similarly restrictive policies developing in already anti-abortion states, and this does raise the question of whether such guerilla tactics are sustainable. These questions may not have clear answers, but the film could have benefited from a more nuanced approach that considered potential drawbacks and challenges, rather than focusing largely on Women on Waves’ achievements.

Though compelling, the film is ultimately more of an advertisement for Women on Waves than anything else. This is not necessarily a bad thing: Gomperts’ work is inspiring, and a much-needed reminder of the potential of grassroots activism to affect genuine change. Yet by taking such a one-sided approach, Whitten risks preaching to the choir while alienating viewers who might be on the fence about abortion. That said, the film’s release on Vimeo and iTunes makes for easy circulation, so perhaps it will reach more eyes and spark more debate than it would in theaters.