University Issues $10,000 Donation to the City of Middletown 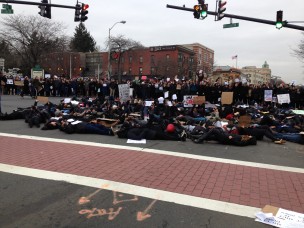 University President Michael Roth issued a donation of $10,000 to the City of Middletown, according to a letter from Roth sent to Mayor Daniel Drew on Friday morning.

The donation comes in response to a $7,500 bill sent to the University to cover the costs of police overtime during the Black Lives Matter March. The march, held on Monday, Dec. 8, was informally organized by a group of students at the University, and was one of numerous similar protests held around the country in response to recent incidents of police brutality against unarmed black men.

While the University did not sponsor the demonstration, Roth and other University faculty participated.

Roth declined to comment, although according to his letter to Mayor Drew, the donation was an expression of gratitude for Middletown’s public servants and for how the city responded to the demonstration.

“We strongly feel that the right to protest should not come with a price tag,” Roth’s letter reads. “However, I did tell you in a phone conversation after the march that the University would like to show its appreciation for the city’s efforts…. Good relations between the City and the University are important; we are bound economically…and occasional gestures like this one are healthy.”

In Mayor Drew’s response to the donation, he announced that he will replenish the police department’s budget by $7,492.81, which represents the costs from the demonstration. He further addressed where the remaining balance will be directed toward.

“I will be asking the Common Council at its January meeting to appropriate the remaining balance of $2,507.19 to the Martin Luther King Jr. Scholarship Fund of Middletown in honor of Dr. King’s lifelong mission to effectuate powerful and positive social change through peaceful means,” Mayor Drew’s letter reads.

Dreisen Heath ’15, one of the organizers of the march, said that she thought Roth’s inclusion of the right to protest in his letter was important in showing the University’s support of the march.

“This makes it clear that the University is in full support of the peaceful demonstration that was done in honor of [all] Black lives (women, men, transgender, queer, children, poor, disabled, [all] Black lives) affected by the pandemic of police misconduct,” Heath wrote in an email to the Argus.

Despite this support, Heath still believes the bill and the subsequent donation were problematic.

“We understand the politics behind this donation, but are also very aware of the cruel irony that Wesleyan just donated $10,000 to a police organization in response to a protest on police brutality,” Heath wrote.

In the case of the Black Lives Matter March, Heath wrote, the position of Middletown’s Mayor seemed clear.

“By billing Wesleyan University the amount of $7,492.81, Mayor Dan Drew quantified his price on black lives, although he says it was for overtime and compensation for the 46 police officers,” Heath wrote. “He put a price tag on justice.”

Updates will be posted as this story develops. 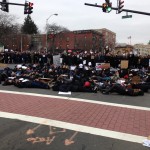 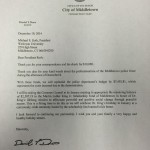 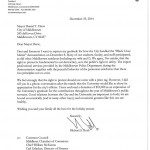