The Feminist Co-op created a space for students to tell their personal experiences with sexual assault for four hours on Thursday, Dec. 4. 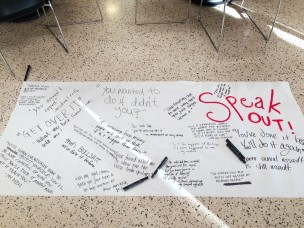 A cohort of students announced on Thursday, Dec. 4 that they are filing a Title IX complaint against the University regarding the adjudication of instances of sexual violence. Members of the Feminist Co-op, led by Natalie Ancona ’15 and Chloe Murtagh ’15, announced their intent to file the claim at the Wesleyan Speak Out Against Sexual and Gender Violence event, which allowed students a space to speak about their personal experiences with sexual assault. The event was scheduled to run from 11 a.m. to 1 p.m., but it ended up lasting until 3 p.m. as students in the crowd continued to stand up and speak about their experiences.

Tess Altman ’17, a member of the Feminist Co-op, described the process of how the complaint came about.

“This year was when [Ancona and Murtagh] really started reaching out to people, and I helped and other people helped reaching out to people to say, ‘Hey, if you have something you think would be in violation of Title IX, we’re filing a complaint. Talk to us,’” Altman said. “And they’re the ones who pretty much put the entire thing together, and complaints can be filed and Wesleyan’s going to be put on that long list of schools under investigation by the Board of Education, which is exciting.”

“Wesleyan takes seriously its obligation to provide a safe learning environment for its students and is confident that it handles sensitive proceedings pertaining to sexual assault in full accordance with its own policies and applicable law,” Holder wrote in an email to The Argus. “We have been made aware that one or more Wesleyan students may have filed a complaint with the U.S. Department of Education, Office of Civil Rights, specifically related to Title IX and sexual misconduct. The University has not seen the complaint but is always prepared to work productively with the Office of Civil Rights.”

Students distributed pamphlets at the event describing a list of demands regarding sexual assault cases, including policy and institutional changes, ways to change the process of how cases are run, and what should happen in the aftermath of each case. The demands included the creation of a rape crisis center, the mandatory expulsion for those found responsible for sexual assault, and collecting feedback from students who have reported sexual assault through the University.

“List of Demands: Radical change to eradicate sexual assault and rape culture on Wesleyan’s campus,” the title of the pamphlet read.
Altman noted that many passersby stopped to listen as people shared their stories.

“I was just really, really impressed by how many Wesleyan students stopped, maybe thought they were only going to stay 5 minutes, stayed for like an hour or two, and decided…to talk about this and [chose] to listen instead of going to their other activities, instead of going to class or somewhere else,” she said.

Another member of the Feminist Co-op, Yael Horowitz ’17, described the impact she felt the event had on the University community.

“We stopped what happens at Wesleyan on a normal day in order to create this space for voices to be listened to, and I don’t think that happens normally,” Horowitz said.

At the event, Karmenife Paulino ’16 told her story about the response to sexual assault at the Eclectic Society.

“We live in a society that is rape culture and it is fervent, it is very much alive,” Paulino said. “We really need to think about how we participate in it everyday, and we need to think about how our voices or the lack of voices can impact others. The most painful thing for me, even more painful than actually being assaulted, was standing in that meeting in Eclectic and hearing all of the people that I’ve loved and taken care of blame me for the worst thing that’s ever happened. What pierced me even more was hearing their silence when someone threatened to bring my rapist into my house. The fact that they feel like their inaction, their silence was nothing, that they did nothing wrong by saying nothing is horrendous. Silence fuels violence.”

Paulino further called for the University to hold perpetrators of sexual assault responsible and punish them accordingly.

“Wesleyan needs to set the precedent that this is unacceptable,” Paulino said. “Coexisting with your rapist should not be the norm…. It’s about time that Wesleyan starts taking this seriously because they’re ruining lives this way. When people talk about these frats, and Eclectic is a frat…the fact that people are like, ‘Don’t take the frats away, because they really affect and benefit student life,’ they’re talking about four years here. Rape follows you for the rest of your life, and it is clear that these places are not doing enough to protect the people that they bring in.”

Alexandra Stovicek ’17 said after the event that telling her own story to the crowd was an empowering experience.

“It was really cool that there were a lot of people there that didn’t know… as opposed to just preaching to the choir, or just my friend group,” Stovicek said. “I haven’t spoken in front of that many people individually before. The vibe was so strong, everyone was snapping, really paying attention, no one was texting, no one was talking. So feeling respected in that space made me willing to speak out, and excited to speak out.”

Altman agreed, stating that it is much easier to share in a safe environment.

“If you don’t see the opportunity to have your story shared, then you don’t share it and that’s part of the pressure of silence…. If you don’t have any outlet then it takes so much to intentionally somehow create a space for yourself to say something like that,” Altman said. “I’m really happy that we were able to create a space for people to do that.”

Vice President for Student Affairs Michael Whaley attended the event and stated that he felt inspired to combat sexual violence at the school.

“The stories are so painful to hear, but always inspire me to do what I can to improve support for those touched by such violence, and to have difficult conversations in both my professional world as well as my private life about the issues at play,” Whaley wrote.

During the event, a student called the Usdan staff to complain about the event, stating that one of the banners was an offensive generalization.

Marco Martinez ’15, a student manager of the Usdan center, responded to the call saying the event was registered and thus enabled students to express their freedom of speech.

“This is a safe space for them to share their stories with one another,” Martinez said. “I had to keep calm and say to the caller that [ze] can’t really intrude upon this event…. We’re really happy that this group of brave students chose this spot to voice their opinions. It’s really important, as the organizer said; we should have these kinds of conversations more. Moving forward, we hope that groups use this space to speak up more.”

Mariah Burke ’15 addressed the important cathartic effect that speaking about one’s experiences can have.

“The most important thing is we bring some sort of healing to the person who needs it the most and if [speaking] is therapeutic for them, then anything is worth anyone’s time,” Burke said.

Matt Lynch ’15 expressed his anger with the administration for not taking responsibility for sexual assault on campus. He said he hopes the University will create more spaces for students to speak about these issues in environments they feel comfortable.

“I still think it’s very problematic that we still have to resort to these open student spaces or even social media or something like that to have our voices heard from the administration,” Lynch said. “When things are posted online, there’s automatically going to be a risk and vulnerability for survivors associated with [posting] it in the first place.”

Paulino also called for the administration to act, stating that placing the onus on students is unacceptable.

“I did not feel comfortable doing this, but I felt that I needed to do it or else it was going to happen to someone else,” Paulino said. “It’s unacceptable, it needs to be destroyed, and Michael Roth needs to start expelling rapists.”