Student artwork will be on display in the Zelnick Pavilion through Nov. 25. 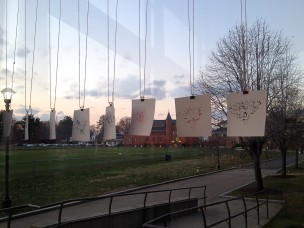 How would you describe the experience of inhabiting your own body? “Renditions of Form,” an art exhibit running from Nov. 18 to Nov. 25 in the Zelnick Pavilion, seeks to investigate that conundrum.

The exhibit—organized by Kate Weiner ’15, Tess Altman ’17, Isabel Alter ’17, Denisse Reyes ’15, Yiyang Wang ’15, and Zia Grossman-Vendrillo ’15—includes photography, drawing, painting, and sculpture. The team released a call for submissions back in September, and the exhibit came together with an opening reception on Thursday, Nov. 20 with performance art by Julia Chanin ’15, Virgil Taylor ’15, and Morgan Hill ’15 as well as poetry readings by Kai Wilson ’16 and Jackie Soro ’14 and a film about bodies by Dandara Catete ’15.

Altman and Alter, two of the event’s hosts, became involved in the project through the Feminist Art and Thought Collective, which they run together. “Renditions of Form” came about as a decision to extend an exhibit put on by the same group of students at the beginning of this year.

On Sept. 2, the activist group FORCE: Upsetting Rape Culture, which organizes various anti-rape movements, brought the 250-square foot Monument Quilt to Foss Hill in a tour of locations around the country. At the same time as the quilt’s display, Altman, Reyes, Wang, and Weiner coordinated an art show in the Zelnick Pavilion.

“We didn’t have sufficient time to cultivate as much art as we wanted to, so we wanted another opportunity to open it up to a broader community of people,” Weiner said.

This time around, the art has much more variation. The group put out a call for submissions to the entire campus, and Altman said that a lot of submissions came from students who never got involved in the feminist community on campus until now. Alter stressed that many contributors would not have displayed their pieces in a more formal setting, and that the informal nature of this project allowed it to be more inclusive.

The exhibit’s central location in Zelnick adds to its accessibility. During the quilt exhibit, Altman said, students would walk by, notice the quilt, and then simply wander into Zelnick out of interest. This exhibit has the same goal.

“It’s a very broad topic of what it’s like to inhabit a body, which is something everyone experiences,” Alter said. “That’s what gives it a universal application.”

Weiner said she hopes that the exhibit will act as a gateway for wider participation in feminism on campus.

“There are a lot of entry points into feminism on campus now,” Weiner said. “It’s wonderful to have things like the Feminist Art and Thought Collective and the Feminist Co-op, and my hope with this exhibit is that there will be more and more opportunities for students to get involved.”