In Defense Of: Young Thug 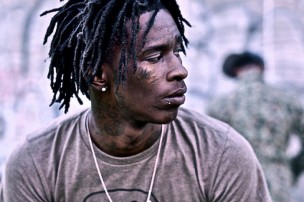 “Did a lot of shit just to live this here lifestyle.”

We’ve all heard “Lifestyle” somewhere. It may have been on the radio on a drive to class, a party at Psi U, or on the loud side of Usdan last week, where half the students paused their conversations to tilt their head to the sky and moan in Young Thug’s signature southern drawl about the trials and tribulations we’ve gone through in our grind to live the liberal arts lifestyle to which I’m pretty sure Thug was alluding.

When “Lifestyle” blew up this fall, there was no denying that the ascension of Young Thug to rap royalty was complete. After almost a year of bubbling in the Atlanta underground rap scene with a series of bizarre but distinctive mixtapes, Young Thug’s street anthem “Danny Glover” began to gain traction amongst rap’s cultural elite. It had everyone from Drake to Kanye West, and a very confused Kim Kardashian, bouncing in the club, bragging about their dope-whipping prowess. After Young Thug followed up “Glover” with the even spacier and weirder hit “Stoner” and began to be courted by several of rap’s major players, including Lil Wayne, it was clear that this ATLien and his leopard print dresses were here to stay.

I know what you’re thinking, and it’s understandable: Young Thug just flat out sucks. You feel embarrassed because every time “Lifestyle” comes on at a party, you black out for four minutes as you scream the chorus and let everyone know there is “a million five on your Visa card.” But in more sober moments, if someone described you as a Young Thug fan, you would laugh and tell them to get lost.

The objections to Young Thug are obvious to anyone who has been blessed enough to listen to even one of his masterpieces. His grasp of the fundamental concepts of music is questionable. His lyrics are of dubious quality at best, and that’s when you can understand him. His voice is utterly incomprehensible.

Let’s focus for a brief moment on Thug’s most distinctive feature, his voice, and the key reason he emerged to rap superstardom as opposed to the million other homogenous Atlanta trap rappers. Seriously, if you have never listened to the chorus to “Lifestyle,” you are in for a real treat because the first time I heard the track, I burst out laughing. I am a big fan of ignorant rap bangers, but I just couldn’t believe Thug had tricked everyone into believing this was hot music. On “Lifestyle,” Thug whines for half the chorus as if he is an 11-year-old throwing a temper tantrum. His lyrics are so incomprehensible that even Rap Genius could not create a lyrics page for “Lifestyle” until Thug performed the song at the BET Awards without the voice of a pig about to be hauled off to slaughter. When Vibe magazine brought in eight people of different professions, including a paralegal and an electrical engineer, and challenged them to decipher the chorus of “Lifestyle,” not one of them guessed the lyrics correctly.

I guess I really should not have been shocked (after “All Gold Everything” and Chief Keef’s entire existence, I guess I should have been ready for anything), but I just couldn’t believe that rap music had embraced the insanity of Young Thug. But here we are, watching Thug perform on BET, tour with Lil Wayne, and perform for 40,000 people at a “Rock The Vote” demonstration in Atlanta. That’s right: If you hate Young Thug, you hate America too.

I recently realized that I couldn’t be ambivalent about Young Thug anymore. No more half measures. No more slinking around denouncing Young Thug in public, despite feverishly bumping “Danny Glover” in my car alone and becoming so worked up that I would contemplate dropping out of school and starting a life of crime. It was time to embrace Young Thug fully. Here’s how I did it.

When something is a complete parody in rap music, it’s somewhat disingenuous to hold it to a standard of serious greatness. At the same time, there’s a fine line between an effective parody and something that’s just an outright embarrassment (Riff Raff, I’m looking at you). However, it would be a mistake to argue that Thug is knowingly mocking hip-hop culture or creating music that is meant to be laughed at purely for its goofiness like Riff Raff’s “Tip Toeing In My Jawwdinz.”

While his style, a fusion of his iconic flow with hazy and dynamic, dirty south beats, has been praised legitimately for bringing a fresh perspective to a genre increasingly overflowing with generic content, it’s not a stretch to evaluate it as something completely outside the bounds of conventionally critically acclaimed rap music. Songs such as “Lifestyle” and “Stoner” attest to this alternate classification of Thug’s music. In addition, it’s important to remember a salient point T.I. made two weeks ago in an interview with CRWN for all the Young Thug haters out there.

Let’s just pretend T.I. didn’t compare Young Thug to James Brown for a second because I might start throwing heavy objects around my dorm. However, the comparison to Ol’ Dirty Bastard and Bone Thugs-N-Harmony seems to make a lot more sense. Once we have understood the partially satirical context in which Young Thug’s music must be evaluated, a standard not based purely on lyrical acumen or an attempt to analyze particularly serious subject matter, there are only two metrics by which we can assess Thug’s music.

First, what’s the quality of his production value? It’s fire. Producer London on da Track has crafted an indelible landscape for Thug’s musings. I only began to listen to Thug in the first place after hearing the beat to “Danny Glover” in a profile about rapper Danny Brown. I had to pause the video and fervently search the web to find out who produced the track. “Glover” is a bruising trap record with booming 808s that would make Lex Luger or Yeezus himself proud.

Second, coming back to what T.I. said, the most important element of the craft of a rapper like Young Thug is the energy his music conveys. “Danny Glover” makes me want to do bad things to good people. “About The Money” keeps me focused on my grind when it’s 1 a.m., and I haven’t started a paper due the next day. And when it comes to carefree and motivational tracks such as “Lifestyle,” it’s impossible to not be motivated to run a marathon or build an orphanage after a few spins.  While it’s evident how much fun Thug is having and how free his voice truly is as it sprawls across “Lifestyle,” it would be a shame to squander such free-spirited music by derisively scorning it. In a way, Young Thug taught me how to love life and save the cynicism for more weighty topics such as Congress and Weshop prices. In that respect, I will always be in his debt.