When it comes to DJing, dodge ball, and diversity, WesCeleb Andrew Martin keeps it real. 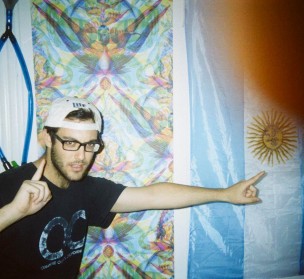 Even if you’ve never heard of Andrew Martin ’15, he’s probably heard of you. Martin, whose interests range from quiz bowl to dodgeball, prides himself on knowing at least a tidbit about each person on campus. The self-proclaimed gossip spoke to The Argus about his Latin identity, his frustration with “try-hards,” and how he accidentally became Wesleyan’s most coveted DJ.

The Argus: Why do you think that you are a WesCeleb?

A: Can you say more about that?

AM: I hear a lot, you know? I have this really terrible reputation for being, like, a little bit of a gossip, I would say, which is never good. I don’t like to admit to it but it’s kind of true. I’m usually rambling in a lot of places on campus. I do a lot of stupid things.

AM: Like, I’m a DJ, like a “DJ.” I do quiz bowl. I work the S&C. Really random things. I know a lot of people randomly. I don’t know, honestly. It’s a whole lotta shit, which is for better or worse.

A: Do you feel like you get a lot of shit?

AM: Not even. It’s more like I just talk a lot of it [laughs]. I’m a big hater. Maybe I shouldn’t be saying this.

A: What are you a hater of?

AM: There [are] a lot of try-hards on campus. I feel like a lot of Wesleyan is very social climb-y, very image-obsessed, very focused on cool and being well liked by a lot of people. These things are very, very aggravating. I feel like I’m not one of those people, maybe? I try not to be.

A: Do you think people are drawn to you because you’re genuine?

A: Can you tell me why you do the different stuff that you’re involved in?

AM: The DJ thing is a really funny story.

A: Let’s hear about that.

A: How did DJ Justice become the name?

AM: My friend Anna Sears [’14], who graduated last year, gave me that name. Justice, La Justicia, she called me. She’s like, “Yeah, you don’t take shit from people.” The whole try-hard thing.

AM: Right. Serving up the piping hot justice. I made it my Facebook name, just ’cause.

A: And now do you just DJ as a thing?

AM: Well, I deejayed Queer Prom. It kept on spiraling to more hilarious things. I thought it would be a funny joke if I emailed the Queer Prom people. I was like, “If you guys are looking for DJs, DJ Justice is here,” and they took me up on my offer. But I did try to DJ the Bend It at Beckham with—

[Someone comes over and says, “Andrew Martin, is that you? Very exciting.”]

AM: Katie’s my collaborative partner. We’re gonna start a new DJ group called K-Hole. We tried to DJ the Bend It at Beckham dance, but they didn’t accept us. I guess we weren’t a very wanted group.

A: Interesting, good enough for Queer Prom but not—

AM: I know, what a bunch of bullshit! Good enough for the gays but not the freshmen? Like, come on!

A: Maybe too good for Bend It at Beckham.

AM: Oh, yeah. They’re like, “You’re at a different skill level. The freshmen aren’t ready.”

A: They’ve gotta work their way up.

A: Can you tell me why you’re involved in quiz bowl and what that’s like?

AM: My Copenhagen mate from sophomore year, Henry Sikes [’15]—he’s a senior—did quiz bowl in high school, I guess, and he wanted to start a quiz bowl team at Wesleyan because we didn’t have one. Except the problem is, like, we’re terrible at quiz bowl. We’re so bad. Sophomore year, we helped found the team. It was him and his Cope-mates and friends we knew. Lately, in the past years, in the later years, there have been actual quiz bowlers, people who did it in high school. Do you know what quiz bowl is?

AM: Yeah, but super hard trivia, really specific trivia about like, opera, and like, classical Greek mythology, and shit I do not know. So we sit there and we’re just, like, brain-dead. It’s really hard, and we went to a tournament at MIT, we went to a tournament at Harvard. I mean, we got slaughtered so bad. We beat Dartmouth, but I don’t like to tell people we beat Dartmouth’s C and D team, not their A and B team, because they have so many people on their team. They were people who were also just tangentially interested like we were, like who weren’t actually good at quiz bowl. But I like to tell people, “Oh, we beat Dartmouth!” They’re like, “Oh, cool.” It’s fun. It’s a way to hang out with my Cope-mates, to pretend to be smart. I’m really competitive, also. It’s fun. We’re so terrible that the Columbia team we played against during one of the tournaments—because the way quiz bowl works is you get a question; if you get the question right, you get the bonus questions only your team can answer—we got one question right; we were so excited. We got bonus questions; we didn’t know a single answer. There were, like, three bonus questions, and the Columbia team was looking at us. They were like, “You guys don’t know any of that?” They were embarrassed for us. It was so bad. That’s not to dissuade the quiz bowl team from still doing tournaments. We’re going to MIT and Harvard next semester, I think, maybe. It’s not a big deal. I wanted to do debate team and I never did it. Being on a team is also fun.

A: And then what do you do at Star and Crescent?

I don’t take things seriously. I like to have a lot of fun. I think people who take themselves seriously are eye roll worthy. I think people in general take themselves too seriously. I always try to bite my lip…I do think I have a lot of friends in varying groups also, a lot of informants. But also, I’m a gay male. I also identify as Latin, so I can dip in. I can pass for a lot of different groups, but I hate the word “pass.” I can identify with a larger group of people on campus, more or less. I’m not really big into the student of color community or the queer community, but I do like to participate when I can. Wesleyan’s really small. It’s not hard to know everyone. It’s not hard to know everyone’s business, either.

A: You’re at most two degrees away from everybody.

AM: Yeah, exactly. Like, if I don’t know someone, I usually know something about that person and/or some of their friends, which means I can figure something out about them.

A: What made you decide to be an American Studies major?

A: What do you want to do after you graduate?

AM: Um, get a job. You know, that would be really nice. I don’t really know at the moment. I just think advertising, marketing, and more media stuff. Getting a job is my sole focus. I don’t want to live at home. I might have to.

A: Where are you from?

AM: Chicago, which is nice. I love Chicago. It’s a great city; I’d love to move back to Chicago. I just don’t want to live with my parents.

A: What else are you up to?

AM: I’m starting Dodgeleyan. Me and my friend Austin Barvin [’15]—he’s a senior also—we’re starting a dodgeball intramural called Dodgeleyan because we think stupid teams with Wesleyan in their name are funny. It’s pretty simple. It’s dodgeball. We’re starting soon, the next two weeks. PSafe contacted us to see if we wanted to do a nighttime game.

AM: Not against them, just, like, reaching out: “Do you want to use Freeman late at night?” We’re like, “Sure.” Fun fact: Lieutenant West, [Public Safety Supervisor] Frederick West, has the word “lieutenant” misspelled in his email signature. He spells it L-E-I and it’s L-I-E.

Austin and I were tabling for the Student Activities Fair for Dodgeleyan, and he dressed up in this ’80s workout gear thing. All of our friends came by the table and were like, “Are you guys doing a gay dodgeball thing?” We’re like, “No. Despite what you may think, this is not exclusively gay.” But mostly gay. People were like, “Is this just an excuse to get SBC funding so you can hook up with people?” I was like, “What? Like, how?” Like, tell people who have dodgeballs thrown at them, “Let me nurse your injuries at my house”?

A: What advice would you give to your freshman self?

A: Despite your annoyance with Wesleyan right now, are you still happy that you went here?

AM: For sure. It’s just that the longer you go on at Wesleyan, the easier it is to see through social lines and see through all the stupid B.S. It’s really easy to get wrapped up as an underclassman, and then as you get to upperclassman, you kind of understand better that it doesn’t matter and this is stupid and some people are try-hard. But no, I do like Wesleyan. I think the administration sucks a lot of the times. A lot of the things that are handled are mishandled terribly. Ultimately, they don’t really care about the student body. But yeah, Wesleyan’s fun. I can’t see myself anywhere else.

A: What initially drew you to Wesleyan?

AM: A lot of kids from my high school went here. It’s a super fun environment, queer-friendly. I wanted to be a film major. Non-Chicago, not close to home. It’s a liberal arts school. It was between here and Vassar. Wesleyan was more well rounded also, because they’re, like, the Diversity University, which is laughable at times but kind of true. [sarcastically] Despite what you may think, I’m not just a white boy.

A: What’s your background?

AM: My mother’s from Argentina, which still means I’m white, which means I speak Spanish. Latino is such a hilarious cultural identity and a lot of people exoticize it. They don’t know what it means, so if you’re Latin, you’re Dominican or Puerto Rican or something like that. They think you’re dark skinned or you speak Spanish or something. They always assume something. “Latin” is such a construct in the U.S.

A: Is there anything else you want to add?

AM: [joking] To all the hot boys…Oh, I did In the Company of Others one year, when I was a sophomore. I’m in Brewery Club this year. I do a lot of random things that have nothing to do with the other activities that I do. I was a WesDEF also, Wesleyan Diversity Education Facilitator. I’m in Alpha Delt also. I do a lot of hilarious things.

A: Do you like that you’re kind of scattered?

A: But not in a quiz bowl, intense way.