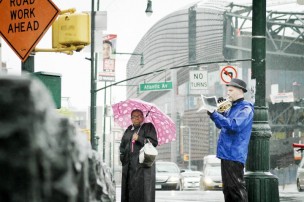 Craig Shepard and Beth O’Brien’s performance of “On Foot: Brooklyn” at Wesleyan’s CFA Hall on Saturday night felt disconnected, and whether or not that was entirely the point was unclear.

Shepard is a composer and trombonist who directs On Foot Productions, and he is described on his website as making “music related to stillness.” He studied trombone and composition at Northwestern University. In 2005, Shepard embarked on a 31-day, 250-mile walk in Zurich, Switzerland, during which he composed a new piece every day and performed it every evening. Beth O’Brien, on the other hand, is a photographer, filmmaker, and visual artist.

Together, they created “On Foot: Brooklyn,” a project undertaken over 13 weeks in 2012, when Shepard—similar to his 2001 project—would only walk to travel, abstaining from public or private transportation, and compose a new piece every week.

“I had a better sense of where I was, in terms of my own internal map,” Shepard said in a PBS documentary on the project, adding that he composed better when he walked.

Each Sunday during this process, he would lead a cell-phone free, silent walk, followed by any observers, friends, or collaborators, to a different public space in Brooklyn to perform that week’s piece.

“By committing to each other to keep silence, a group creates a bubble of stillness which moves through the urban landscape,” the On Foot Productions website reads.

O’Brien would follow behind on bicycle, photographing them and their surroundings, taking thousands of shots, right after one another.

On Saturday night, Shepard, dressed in concert attire with his trombone, sat in a chair on far stage right while O’Brien took her place at a desk with a computer and speakers on far stage left. The auditorium could hold 120 people, but only about 10 students, myself included, made up the audience; two left before the performance was even half-finished, which might be indicative of the performers’ failure to explain any components of their project or of the evening.

Shepard and O’Brien both sat, silent, for a few minutes, with the “On Foot: Brooklyn” logo projected behind them, which then changed to a black screen. Eventually, the screen changed to a projection of O’Brien’s photographs, stitched together to make essentially a very sparse stop-action film showing Shepard performing in one location in Brooklyn.

Shepard eventually began playing his trumpet in the photos, long held notes—each “piece” only used two or three notes—with large gaps in between, seemingly without meter.

“It sounds a little like wind chimes on a slow day, so there will be some tones and some silence in between,” Shepard said in the documentary. “And they might find they start hearing some things in the space outside that they’ve never heard before.”

At some point, the speakers would begin to fade in noises taken from the streets they walked and played, with children laughing or car sirens blaring, attempting to stitch together a sonic landscape from disparate parts.

This happened twice, but not in any apparent coordinated matter. The friend with whom I attended the performance (who lives in Queens, NY and is a fellow soundscape aficionado) pointed out the three locations listed in the provided setlist did not match up with the two locations shown on the screen, which she identified as Canarsie (his March 4 location) and Downtown Brooklyn at the intersection of Flatbush, Atlantic, and 4th Avenues (his April 22 location).

Knowing that, and giving Shepard the benefit of the doubt that it was not a mistake but a purposeful alteration, we questioned how each element of the performance connected. There were five elements we could identify: Our visuals of the performers on the stage; the images projected on the screen; the sound from Shepard’s trombone; the sound from the speakers; and the ambient noise of the room (taking into consideration what Shepard said above about hearing things in the space outside).

We were, absolutely, as Shepard seems to have intended, made more aware of the sounds around us—people moving or leaving the room, my own breathing, the whirring of the hall’s fans—but most of all, we became doubtful of all we saw and heard. After the second piece of the performance ended, both Shepard and O’Brien stood up, bowed, and left the room, without comment. I doubt this was the takeaway they intended, but without their intervention, it was the one we got.

Corrections: An earlier version of this article stated Craig Shepard’s Zurich performance took place in 2001 with Manfred Werder and Jürg Frey. The project was in fact a solo performance and took place in 2005. In the final sentence, the article used “he” and “his” in reference only to Shepard, and has been corrected to “they” and “theirs” to refer to both Shepard and Beth O’Brien.