Ariel Levy '96 discusses her search for surprising stories and an an accurate portrayal of reality. 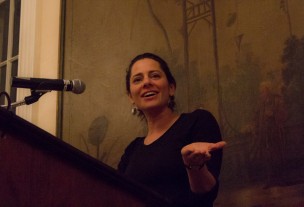 Playing with language and talking to people in wheat fields in South Africa: these are a few of Ariel Levy’s favorite things.

“I’m dead serious,” Levy, an alumna of the class of 1996 said. “I like talking to people in the middle of nowhere who I would never meet if this weren’t my job. I think it’s like a superpower; I think it’s the coolest thing.”

Levy’s job as a staff writer at The New Yorker since 2008 has brought her to talk to some very middle-of-nowhere people, indeed. Though she dabbles in terms of subject matter at the magazine—a restaurant review or two, a book review here, a National Magazine Award-winning personal essay there—her main gig involves running into a curious story and pursuing it to the ends of the earth. And, sometimes, to a wheat field in South Africa.

As she told a gathering of students at the top of Allbritton, for a Q&A before her Russell House reading Wednesday evening, Levy enjoys surprises and things that appear counterintuitive. Which is why, in 2009, she heard the story of then-18-year-old runner Caster Semenya and felt the need to jump on a plane to South Africa.

Semenya had unequivocally won the 800-meter competition in Berlin’s 2009 World Championships. Her gender and biological sex, however, became a point of debate. Various tabloids, athletes, and officials questioned if Semenya, who competes in women’s races, was in fact a woman and could legitimately compete. Levy, in her piece “Either/Or,” questioned how a barrier between men and women, for sports or for anything, could ever be determined.

“In order to do that story, I had to do mad research,” Levy said.

She consulted experts on the reproductive system and looked into the history and science of what are now called “disorders of sex development,” brushed up on South African politics and the rules and regulations of professional athletics, and then went in person to talk to Semenya’s coaches and family.

She said it was the best experience of her career, although this was not for lack of engaging projects: At The New Yorker alone, Levy has profiled Edith Windsor, whose lawsuit against the Defense of Marriage Act won in the Supreme Court; Diana Nyad, a long distance swimmer; and even Mike Huckabee, whom she joined on an evangelical pilgrimage to Israel.

Right after graduating from Wesleyan, Levy started working in the page program at CBS, thinking she wanted to become a television writer, but decided pretty quickly it wasn’t for her. She took an internship at New York Magazine instead, for the gossip column. That, too, she hated.

“It was so horrible I can’t even tell you,” Levy said. “I cried every day in the bathroom. It was these two women: one was really thin and mean, and the other was fat and mean.”

After moving up to an assistant’s job, Levy became focused on getting herself published. She and a fellow Wesleyan alum in the photo department collaborated on an article about obese women’s nightclubs, cleverly titled “Women’s Lb.”

After that first time, obtaining bylines became a lot easier. Eventually, with a New York Magazine critique on raunch culture titled “Me Tarzan You Jane,” Levy caught the attention of a publisher, who suggested she turn it into a book.

The resulting book, “Female Chauvinist Pigs,” is almost 10 years old now, and Levy all but said she is bored talking about it. Her interests in sex, feminism, and women, however, has continued to show in her work as a journalist. In 2008, she contributed to a collection of women writers reflecting on Hillary Clinton, put together by New Yorker articles editor Susan Morrison; at the book party, she met David Remnick, the magazine’s editor-in-chief. He asked her what she thought the publication was missing.

“If an alien found a copy about the New Yorker, and it was all they had about Earth, they would think, ‘Oh, Earthlings don’t think sex is interesting,’” Levy told him. “It’s a failure in one way to report the truth about humans.”

Of course, Levy could help them do better, and she told Remnick so. He hired her.

She has since turned her sights on another book, based on her award-winning New Yorker essay from last year, “Thanksgiving in Mongolia.” At Russell House she gave a reading of the piece, recounting her solo trip to Asia and the miscarriage she had while there.

Although Levy never pretends in her writing that she doesn’t have political views or a personal investment—some stories reveal this more than others—she is generally more interested in telling other people’s stories than her own. She tells this to all of her potential subjects, and for some 20 years, it’s been enough to convince them to speak to her: