In the World Music Hall on Tuesday night, this trio gave a rich, beautiful performance. 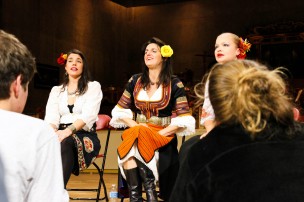 From the far corner of the World Music Hall stage, three women emerged with flowers in their hair. Vlada Tomova, Valentina Kvasova, and Shelley Thomas wore woolen outfits with embroidered and scalloped shirts. Each outfit was a variation on the same theme.

Seeing the three women together recalled images of the three Graces, or perhaps a trio of backup singers. But this show was entirely theirs. Unaccompanied, they opened with a song that they described as “in gibberish,” all about the moon. The second was about a gathering in which girls fall asleep and wake up missing clothing. Their voices formed rich, golden dissonances. The audience sat enraptured by the bright, clashing harmonies.

After they finished, Tomova remarked that the resonance of sound in the hall was “very, very, marvelous.”

“The way you all are seated, it’s kind of like a village,” she added, scanning the cross-legged members of the audience.

The group onstage, Bulgarian Voices, formed because Tomova ran a Bulgarian choir in Brooklyn, NY. Kvasova, who is Russian, called Tomova because she was interested in singing together, and even teaching each other.

“For a couple of years, we just strolled about with our tiny babies and I taught her Bulgarian songs and she traded me Russian songs,” Tomova said. “The joggers would stop.”

Later, when Thomas, an American, joined, they became a trio. The three women use music to explore their individual backgrounds. The concert was composed of traditional Bulgarian village folk songs and Russian songs coming from villages as well as polyphonic and Western songs with traditional influences.

As Tomova made eye contact with the other women, they synced up their breaths before beginning again. The third and fourth songs—about a girl who sees her reflection in a river and three others going to bed—continued their dissonant, sonorous pattern. Kvasova’s alto voice kept steady as the other women’s voices wove in and out. Particularly striking were the effortless slides from note to note; Thomas’s voice soared up and down the octaves. As they closed the set, Tomova remarked that the end of one of the songs was open to interpretation.

“It leaves you wondering, making up your own story in the end,” Tomova said.

Before starting the next songs, Kvasova hurried offstage and emerged with a tambourine for the more traditionally Russian pieces. She explained that the songs came from Rostov-on-Don, a city about a thousand miles from Moscow. Many Cossaucks, who had run away from the Czar, lived in this place; Kvasova described them as strong people.

“You can hear it in the song,” she said.

The Russian melodies offered a contrast to more traditional harmonies. People in the audience sat motionless, save for the smiles creeping across the lips of a few patrons. The women also sang a Russian tongue-twister about a man in love with a girl named Natalia. When Tomova burst into laughter at fudging the last syllables, she jokingly asked the audience if they wanted to try the lyrics themselves.

For the final songs, Tomova invited all the members of the audience to sit closer and hear the harmonies differently. Cross-legged in concentric semi-circles onstage, the audience gathered as if ready to listen to stories. The trio invited members of Slavei to sing one of their signature songs, “Dilmano, Dilbero,” a Bulgarian tune about picking peppers. Grinning, audience members lent their voices to help craft the beautiful harmonies of the Bulgarian tune. One could almost imagine all those seated together as a kind of village.