Football’s undefeated run comes to an end in an overtime homecoming heartbreaker against Amherst. 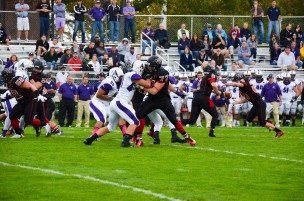 This wasn’t how the story was supposed to be written. The football team was going to win back-to-back Little Three titles and avenge last season’s loss to Trinity on its way to an undefeated season and an outright conference title. Unfortunately, the game is not played on paper, and a dandy contest it was.

With rain pouring throughout the afternoon, the Cardinals and Lord Jeffs battled it out at Corwin Stadium for Homecoming Weekend. The Birds snapped a 10-year losing streak to Amherst last season, 20-14, but could not win two in a row against the Lord Jeffs; they have failed to accomplish this since 1992-1993. Amherst continued its undefeated campaign (5-0), while spoiling Wesleyan’s (4-1). The game ended in thrilling fashion, with Amherst closing out the game in overtime on a field goal to give them a three-point edge, 33-30.

The Cardinals started off strong, forcing Amherst to punt on its opening drive. Wes commenced its offensive drive with the Wildcat formation, led by Devon Carrillo ’17. A 15-yard face mask infraction and a 15-yard personal foul aided the Birds’ drive. Kyle Gibson ’15 found the end zone on a two-yard run; he kept his legs moving forward and scored on a second effort. The possession lasted nine plays and went for 80 yards in 4:58. Ike Fuchs ’17 added the extra point to give the home team a 7-0 lead with 7:25 remaining in the first quarter.

On Amherst’s following possession, Dee Simons ’15 was able to get pressure on the quarterback, forcing an incompletion and a punt. Wesleyan was set to get the ball, backed up in its own zone at the 14-yard line, but was pushed even farther back after a 10-yard holding penalty. Following the call, Carrillo ran left on a sweep play and seemed to injure his ankle. The sophomore, a feature on all three units, did not return to the contest. The Cards did not do much more on this drive, and a weak punt gave the Lord Jeffs the ball at the Wesleyan 24-yard line.

On the first play of the possession, the Amherst running back took the handoff left and scampered towards the goal line for a 24-yard score. Following the extra point, the score was all knotted up. The Cardinals looked strong at the start of their next drive. Quarterback Jesse Warren ’15 had pressure in his face, but was able to find Captain Jordan Fabien ’15 on a 14-yard completion. The possession did not do much more, due to a costly 15-yard unsportsmanlike conduct penalty. Warren was forced to run in a third-and-long situation after seeing tight coverage in the secondary, but came up just a yard short of the first-down marker.

The Birds punted back to the Lord Jeffs, but on their first play, a halfback option toss, Rob Manning ’16 ran back with no opponents in sight and intercepted the pass. Wesleyan couldn’t capitalize on the turnover, failing to convert a fourth-and-23 at the Amherst 29-yard line. Not wanting to call on the field-goal unit, Warren threw up a pass to the end zone that was almost hauled in by Fabien for the miracle score. After the disappointing drive, Wesleyan’s defense would hold again, and a punt return from Captain Donnie Cimino ’15 gave the offense the ball near midfield.

Lou Stevens ’17 had his best game of the season and carried the team on this drive. He rushed for 24 yards on four carries, including a 14-yard touchdown scurry, where he burst through the hole, ran right, and was tackled as he crossed the goal line. The drive also consisted of a one-handed catch from wide-out Josh Hurwitz ’15 and a quarterback sneak from Warren on a fourth-and-one. Fuchs’ extra-point attempt was blocked and Wes was up 13-7. This point became a factor in the closing stages of the fourth quarter.

Amherst threatened on its next drive, moving 58 yards to the Wesleyan 15-yard line. An incomplete pass on third-and-short forced the Lord Jeffs to take the three points with 23 seconds left in the half, closing the gap to three.

Wes received the ball at the start of the third quarter and the offense trotted onto the field at their own 20-yard line. The first play saw Warren complete a 42-yard pass to Hurwitz, who broke a tackle and ran down the sideline. Unfortunately, the Cardinals had to settle for a 30-yard field goal from Fuchs, increasing their lead to six.

Amherst came out in the second half as a much-improved team, as seen on its first offensive possession. The quarterback drove his unit 85 yards for the touchdown in 11 plays, taking 4:03 off the clock. The touchdown came on a five-yard run from Amherst’s star running back and gave the away team a one-point lead.

The Cardinals responded with a touchdown of their own, traveling 75 yards in 10 plays. The drive lasted 4:48 and finished on a 20-yard toss from Warren to Fabien. Warren converted on third-and-long twice, first finding tight end Neil O’Connor ’17 on a 15-yard completion, and then connecting with Captain Jon Day ’15 for 13 yards to give the offense a first-and-goal opportunity. Following the extra point, Wesleyan took a 23-17 lead.

Amherst tacked on a field goal at the end of the third quarter from 30 yards out on its next drive to cut the Cardinals’ lead to 23-20.

Wes started out the final quarter on a poor note when Warren threw his first interception of the season after a miscommunication with tight end Ben Kurtz ’17. Amherst took advantage of this pricey mistake in just six plays; the running back found the end zone for the third time in the game. A successful extra point gave Amherst a four-point advantage. The Cardinals and Lord Jeff traded punts, following a penalty that negated a huge run. Wes had the ball at its own 32-yard line with only four minutes remaining.

The opening play was a beauty; Warren threw a bomb to Fabien along the Wesleyan sideline, and Fabien caught the pass in stride, stutter stepping to evade two defenders and coasting into the end zone. Following the extra point, Wesleyan regained a three-point edge.

After a failed drive, Amherst punted back to Wesleyan with 2:22 remaining, but Wesleyan could not milk the clock, only using up 47 seconds before having to punt back to the Lord Jeffs. Amherst took advantage of receiving the ball at midfield and hit a 41-yard field goal to even the score with only 23 seconds left.

NCAA overtime rules dictate that each team will get one possession starting at the opponent’s 30-yard line, and after that, if the score is still even, the process will be repeated. Wesleyan got the ball first and was soon faced with a fourth and one at the three-yard line. Feeling the pressure to score a touchdown, they went for it with a run but were given an unfavorable spot, short of the distance needed. Amherst received the ball, only needing a field goal to win. After three plays, the kicker marched onto the field and knocked in a 35-yard field goal to give Amherst the 33-30 triumph.

Hopeful to still win a share of the NESCAC title, Wesleyan will try to rebound this Saturday, Oct. 25 at home against Bowdoin. The Birds beat the Polar Bears last season, 34-14.