At “Late Night with C. D. Wright,” students packed into the Shapiro Creative Writing Center for an intimate poetry reading. 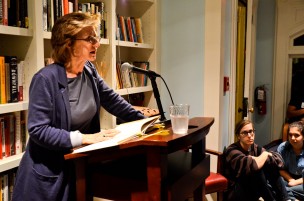 As they coalesced on the crowded carpets and cramped chairs of 167 High St. on Tuesday night, students focused their efforts on inconsequential dialogue. One student, seeing plates being transported from the kitchen, enthused about the food selection (“They have grapes!”). A couple of friends contemplated whether it would be better for them to sit on the bench, which had no back, or on the floor.

By the time the event started, the room was stuffed. There were about three feet between the front row of chairs and the podium, and there was less space than that between the podium and the wall. Every chair was filled, and the floor was taken up by people sitting cross-legged. Some students even had to sit in an overflow room.

The room became silent as Shapiro Center Senior Fellow Amanda Distler ’15 walked to the podium to introduce Brown University professor and award-winning poet C.D. Wright. Distler also introduced the event, the Shapiro Creative Writing Center’s “Late Night with C.D. Wright,” as a combination of a poetry reading, a Q&A, and a chance to “mingle” with the poet.

Because the distance was so small between Wright and the audience, the reading felt intimate. Wright spoke in front of a bookshelf, and it was possible to read the titles of some of the books from the front row.

“It was such an intimate space, which I’m not used to at this school, because normally poetry readings are held at the Russell House,” she said. “[It was] super nice to be sitting super close to her.”

The event had an informal atmosphere. After Wright had finished reading her poetry—one poem was from “Rising, Falling, Hovering,” which won the 2009 International Griffin Poetry Prize, while the rest of the readings were passages from her 2010 book-length poem “One with Others,” a finalist for the National Book Award—she cut the Q&A short, instead choosing to sit in the kitchen area and encourage people to come to her personally with any questions they had. (The inspiration for this may have been that no one raised any questions during the Q&A.)

According to Distler, the event was largely planned with the intention of providing a more personal setting than the Russell House, where readings are held in a large room with a podium set far from any seats.

The event also provided a way for students and faculty to become familiar with a poet who is teaching a not-for-credit masters class at Wesleyan this semester. Writer in Residence and Shapiro Center Director Amy Bloom ’75 said that every semester since last fall, the Shapiro Center has had a prominent American writer teach three two-and-a-half-hour masters classes for Wesleyan students; Wright is teaching this semester’s classes.

According to Bloom, “Late Night” provided a way for workshop students to become familiar with their teacher’s work, while it allowed other students to discover her writing.

Distler said that, in all, more than 70 people came to the event. One professor, she said, brought his entire class.

Because of the number of people who came, Distler said she needed to hook up speakers to an overflow room so everyone who was present could hear the event.

“It wound up being very necessary,” she said. “People were sitting on the floor in bunches, just trying to listen.”

Mattox, who is in Wright’s workshop, found the reading to be an especially invigorating way to experience Wright’s work.

“[The event] was great,” she said. “I love hearing poets read their own stuff. It’s so much more powerful than hearing someone else read it. I mean, reading poetry yourself is really important, but it’s an incredibly unique opportunity to get to hear someone read the work that they wrote because you get such a different sonic quality from the writing.”