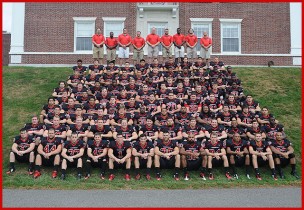 The Wesleyan football team, currently ranked second in Division III among New England teams at 4-0, defeated Bates last weekend 24-10 to cap off back-to-back games in Maine. It was the ninth consecutive meeting between the schools that the Cardinals have won.

The win did not come easy for the Birds, despite the fact that they outgained the Bobcats 418 to 164 in yardage. The contest featured another slow start for the Cardinals, something it cannot afford to have later in the season against formidable opponents such as Amherst, Williams, and Trinity. Head Coach Mike Whalen spoke about why he thought his team was scoreless until its final drive of the second quarter.

“Bates both offensively and defensively has schemes that no one else in the league runs, so it’s the only time that we see the formations all year,” Whalen said. “On offense, they run the option, and on defense, a 3-5 stack with a lot of blitzing. Because we can’t simulate the scheme in practice, it takes our players a little bit of time to adjust to the speed of the game. Their first drive was 65 yards, but then the rest of the game they only had 95 yards. Once our defense adjusted to the speed of the game, we pretty much shut them down.”

The Bobcats took the opening kickoff and clawed down the field in 5:41. The Cardinals’ defense was able to withstand the heat, only relinquishing a 23-yard field goal to the home team. The drive lasted 14 plays and went for 69 yards, including a 33-yard reception and a third and goal stop from Wesleyan.

Trailing by three, the Birds had the ball and quarterback Jesse Warren ’15 threw a 28-yard completion to tight end Ben Kurtz ’17. Kurtz was tackled at the Bates 39-yard line and wildcat quarterback Devon Carrillo threw a 10-yard completion to the other tight end, Jon Day ’15 on the ensuing play. After gaining only one yard on the next three plays, Wesleyan was forced to bring on its field goal unit. Ike Fuchs ’17 could not tie up the score, as he was short on the 43-yard attempt.

After a 38-yard run from the Bobcats, it looked as if Bates was going to increase its lead. On third and twelve at the Wesleyan 29-yard line, Nik Powers ’15 got pressure on the Bates quarterback and sacked him. The quarterback fumbled and lineman Alex Sakhno ’15 recovered the ball in Bates’ territory. Wesleyan could not take advantage of the mistake like it does so often, turning the ball over on downs with four straight plays that gained only six yards.

“Offensively, we didn’t convert in the red zone,” Whalen said. “We missed two field goals and the bad snap on an attempt led to a turnover on downs. Also, one time a fake, so that’s four missed chances in the red zone.”

Next time Wesleyan had the ball, it would drive down to the Bates 18-yard line with the help of 19-yard reception from Josh Hurwitz ’15 and a 13-yard run from Lou Stevens ’17. The woes of the Cards’ special teams continued, as Fuchs was short again, this time from 34 yards out.

Whalen spoke about his outlook for the special teams for the rest of the season.

“We just have to try and get better,” he said. “We may look at working in some different snappers and becoming more consistent with different snappers and holders. At the end of the day, it comes down to execution. We put a lot of time into special teams, and Coach [Jeff] McDonald does a great job with the unit. We have a first-year varsity kicker, and sometimes it takes some time to get those things in sync.”

Bates would get the ball at their own 20 and end up punting back to Wesleyan. On their first play, Carrillo took the snap and ran 66 yards before being brought down at the Bates 20-yard line. Three poor plays and a high snap on a field goal attempt would leave the Cardinals off the scoreboard.

The Bobcats’ next drive would be short-lived, as defensive back Donnie Cimino ’15 intercepted the pass on second down. Once again, Wesleyan could not take advantage of the turnover, going three and out on its following possession.

The Cardinal defense would hold strong, getting the offense the ball back with 1:29 remaining and 62 yards to reach the end zone. Warren found senior Jordan Fabien three times on the drive for a total of 29 yards and also connected with Hurwitz twice for 32 yards. Kyle Gibson ’15 gave the Cardinals their first points of the day with a 1-yard touchdown run. Fuchs would nail the extra point giving Wesleyan a 7-3 going into the break. The drive took 10 plays and lasted 1:15, leaving just 14 seconds in the quarter.

The Cardinals dominated the second half. On their second drive of the third quarter, Warren engineered an eight-play, 47-yard drive that ended in a 5-yard rush from Stevens for the 14-3 advantage.

After stopping the Bates offense, Wesleyan would get back on the field and move 56 yards in 10 plays. The possession would be capped off by a 27-yard field goal from Fuchs. Bates would be forced to punt again on its next possession, giving the Cardinals the ball back with a 14-point lead.

Warren would complete a nine-yard pass to Kurtz, but the tight end fumbled the ball, giving the Bobcats the ball at the Wesleyan 16-yard line. Bates wouldn’t let the opportunity slip, cutting the lead to a one-possession difference with a two-yard touchdown run.

After possessions that ended with no points and missed opportunities, Wesleyan retrieved the ball after a fumble recovery by Justin Sanchez ’17 at the Bates 20-yard line with 4:52 remaining in the game. On the first play of the possession, Warren found Fabien for the game’s final points on a 20-yard insurance touchdown, putting the Cardinals up 24-10.

“The biggest positive is that we survived back-to-back trips to Maine,” Whalen said. “I think people underestimate how difficult it is to travel and go overnight in three of your first four weekends. Both Colby and Bates are always very physical teams. They’re going to come after you, regardless of the score. It’s hard to win on the road in Maine; it’s always been that way.”

Amherst comes to town next Saturday, Oct. 18 on Homecoming Weekend for a contest of two unbeaten teams. The Cardinals were victorious last season in Amherst, 20-14.

“Not making critical errors,” Whalen said of the key to beating the Lord Jeffs. “This means no foolish penalties that cost you field position or extend their drive. We’ve done that the past couple of games where we stop them on third down, and then we have a stupid penalty that ends up giving them a first down. We can’t do that against a team as talented as Amherst. At the end of the day, our big-play players need to make more big plays than their best players. In games like this, as a coach, you expect your stars to shine. We’ll find out on Saturday, and I have a lot of confidence in our guys.”