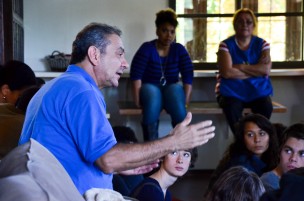 “Last year, we were dealing with excessive workloads for the Sun Services workers,” said Sara Swaminathan ’17, a member of USLAC. “They were being extremely overworked and we were doing our best to get more workers hired. We weren’t successful with actually getting workers hired, but we passed a [Wesleyan Student Assembly] resolution basically saying that the entire student body of Wesleyan wants more workers to be hired to decrease workloads for the workers on campus.”

Starting in 2012, the University subcontracted its custodial employment to Sun Services, which describes itself as a privately held janitorial and facility maintenance business. Since then, workers have consistently expressed dissatisfaction with their conditions and pay; the summer of 2013 in particular saw a surge of protests and activism. The company has also faced scrutiny from USLAC and other student activists.

“USLAC is a student group that does our best to advocate for the workers on campus,” Swaminathan said.

USLAC hopes to address large-scale systemic problems by calling for structural changes to administrative policy. On a smaller scale, the group advocates for day-to-day improvements in the way the campus community interacts with workers.

Last year, USLAC aimed to bridge the gap between students and staff through the implementation of a worker-shadowing program. Swaminathan emphasized the importance of this program in helping students understand the extent of the work that Sun Services employees do.

“Students were able to go with workers when they went on their cleaning routes and just see the kind of labor they were having to do,” Swaminathan said.

Alexandra Ricks ’16 has been involved with USLAC since her freshman year and is a strong proponent of greater structural changes to improve worker conditions.

“I definitely think that needs to be the priority,” Ricks said. “Students come and go after four years…[they] will graduate and leave, and the real problem is the policies that are in place and the devaluation of this service work. That means the University doesn’t want to pay very much money for the subcontractor, the subcontractor doesn’t want to pay their workers very much, and they want to squeeze as much work as they can get out of them.”

Ricks also stressed that the pursuits of just employment policies and positive relationships between students and staff are not mutually exclusive goals.

“USLAC also wants to work on building more of a community with the workers and forming relationships with them, making them feel really comfortable with us and the student body in general,” Ricks said. “I think that’s also important so that they can enjoy the place [where] they work.”

At Friday’s meeting, students discussed organizing an email campaign directed at University President Michael Roth and the head of Physical Plant to call attention to students’ and workers’ concerns. Also suggested was the idea of a campaign directed toward Residential Advisors, encouraging them to speak to their residents about the respectful treatment of facilities and workers.

Marcos Plaud ’18 attended the meeting to learn how he can contribute to the labor rights movement. He hopes that natural conversations can occur between students and Sun Services employees.

“The first few days when I was going to the bathroom in my housing, I realized the worker there was a Hispanic woman, and I am from Puerto Rico,” Plaud said. “I had a few conversations with her, very briefly because I was always in a rush, but I still identified with her and it was nice to see a person that I could relate to working in the space that I lived.”

According to Ricks, the most immediate step that can be taken to improve worker conditions for campus custodians is to cultivate respect for the workers themselves.

“The workers receive a lot of disrespect from their employer, Sun Services; and also from the student body as a whole, and also from the administration,” Ricks said. “So I think that if the workers are more respected—if the administration and if the students and if the company were more respectful of the workers and the work that they do—then I think things would be a lot better for them. Our priority is to support the workers with their problems and make their jobs tolerable.”