Football notched one defensive TD en route to a 28-7 victory on the road. 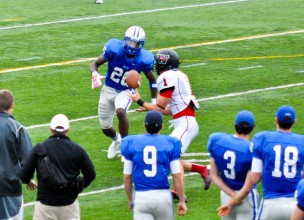 A major reason the Wesleyan football program is still undefeated after three contests is that the squad has poached 37 points off opponents’ turnovers while not allowing a single point off turnovers themselves. The Cardinals’ latest test came this past weekend against a winless Colby squad.

Head Coach Mike Whalen believes that the Cardinals have yet to play their best football of the season, despite the team’s success so far.

“We started off strong with a big play on the opening kickoff and then two plays later we scored,” Whalen said. “We missed some opportunities in the first half to create some separation because of some of the mistakes that we were making. We made some corrections at halftime and played a lot better in the second half.”

Although it was not a pretty performance, the Birds walked out of Maine with donkey manure on their cleats and a 28-7 victory over the Mules.

Wesleyan ran out of the gates first on the opening kickoff when Alex Daversa-Russo ’16 forced the returner to fumble, and Jon Spivey ’16 picked up the loose ball at the Colby 20-yard line. After a three-yard pass play, Kyle Gibson ’15 finished the drive with a 17-yard touchdown run, and Ike Fuchs ’17 nailed the extra-point attempt to give the Cardinals a 7-0 advantage just 45 seconds into the first quarter.

Following a few scoreless drives, the Cardinals called for a fair catch at the opponent’s 48-yard line. Quarterback Jesse Warren ’15 then connected with Jordan Fabien ’15 on a 30-yard completion that brought the Wesleyan offense into the red zone. On the ensuing play, Warren found Jon Day ’15 on the left side, and the tight end finished the play, running upfield and into the end zone for the remaining 18 yards.

Neither team could get much going after that until Colby got the ball back with 12:21 remaining in the second quarter.  The Mules finally put together a thorough and effective drive, which lasted only 2:20. They progressed 53 yards in nine plays to cut the lead to a one-possession game at 14-7. The Cardinals could not respond quickly, only gaining one first down on their next drive before being forced to call on the punt team.

On Colby’s subsequent drive, Jake Bussani G’14 intercepted a pass and gave the Redbirds a golden opportunity to add more points before halftime arrived. The drive started at the Colby 20-yard line. After progressing down to the Colby two-yard line, Wesleyan was assessed a costly penalty that brought them back 15 yards. The flag was thrown for unsportsmanlike conduct for arguing with officials because the Cardinals believed that Gibson had crossed the goal line. This forced the Birds to settle for the 33-yard field goal attempt with just over three minutes remaining in the second quarter. Fuchs shanked it wide right and the score remained 14-7. Colby punted on its next drive, and Wesleyan proceeded by running out the clock in the half.

The second half started off with each team punting twice. With 5:32 remaining in the penultimate quarter, Warren commanded a nine-play, 68-yard drive that left just 14 seconds remaining in the quarter. On that possession, Wesleyan benefitted from a 15-yard pass interference penalty on the Mules that gave the Cardinals a much-needed first down. After that, Warren found Fabien on a 19-yard reception and capped off the drive by throwing a four-yard touchdown strike to fellow senior Josh Hurwitz. Hurwitz ran in motion to Warren’s left and the quarterback connected with the wide receiver on a swing pass with blockers ahead. In one of the more unusual plays one will ever see in Wesleyan football, Fuchs’ extra-point attempt was blocked, but the ball ricocheted off the goalpost and fell backwards between the uprights to make the game 21-7 in favor of the Cardinals. This play summed up the day for Colby.

The Mules were able to move the ball forward on their next drive, reaching the Cardinals’ 30-yard line. A holding penalty pushed them out of scoring range, and they were once against forced to call on their punter. After each team punted one more time, Wesleyan had the ball with 7:16 left in the game, but was unable to do much. The offense ran three plays, gaining four yards and only taking 1:56 off the clock.

With just 5:20 left in the game and down two scores, it was time for the Mules offense to produce or face a loss. Put in a bad position on third and twelve, the Colby quarterback was pressured by Dee Simons ’15 and Nik Powers ’15. This forced an errant pass, which was picked off by Bussani for his second interception of the day. The defensive back and three-time first team all-conference selection took the interception 22-yards back to the end zone for a 28-7 Wesleyan lead with 4:01 remaining.  This would be the final score of the afternoon. Colby punted next, then Wesleyan also punted, and Colby received the ball for a final three-yard run.

Warren was efficient on the afternoon, completing 13 of 21 passes for 157 yards and two touchdowns.  Warren pinned the Mules at their own four- and nine-yard-lines on two punts, with his longest kick reaching 58 yards. He had eight punts throughout the game.

Gibson led the Cardinals’ trio of running backs in carries and yards. He rushed the ball 24 times, totaling 81 yards and a touchdown. Lou Stevens ’17 added six carries for 19 yards.

The team is still waiting for running back LaDarius Drew ’15 to come back from a foot injury.

“He’s taking X-rays once a week,” Whalen said. “Once they determine that he has healed, then he can start to run and get back into shape. It’s a process that we’re still figuring out.”

Fabien led the wide outs in yards and receptions, totaling five for 80 yards. Hurwitz had two catches for 24 yards, including a touchdown.

Defensive back Justin Sanchez ’17 led his unit with seven total tackles, four of which were solo. Daversa-Russo had the team’s only sack, which was for a loss of seven yards. The defense had three tackles for a loss, which totaled 11 negative yards, and also produced four pass breakups. Wes was also able to hurry the Colby quarterback 11 times, a season high.

Wesleyan will look to make it a perfect first half of the season next weekend upon returning to Maine, this time to take on Bates. The Bobcats are 1-2 but have had no mutual opponents with the Birds so far this season. Wesleyan bested Bates last season in Middletown, 35-7.

“That’s the goal,” Whalen said of trying to play a complete 60-minute game. “It’s never an easy process with offense, defense, and special teams. So far, our defense has been scoring points. We’ve also played very well on special teams, and on offense, we aren’t turning the ball over. If we can continue to be solid in all three phases of the game and eliminate some foolish penalties, it will help us to reach our full potential.”