The CFA “Gender, Islam and the ‘Muslim Problem’” panel, moderated by Professor of Religion Peter Gottschalk, discussed how gender is fundamentally tied to Western perceptions of Islam. 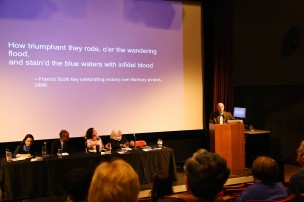 The Center for the Arts’ “Muslim Women’s Voices at Wesleyan” series, which will run throughout the academic year, aims to bring to light issues of identity, faith, and gender in Muslim cultures in the Middle East and the West. Thursday’s “Gender, Islam and the ‘Muslim Problem’” panel, moderated by Professor of Religion Peter Gottschalk, discussed how gender is fundamentally tied to Western perceptions of Islam.

The panel joined together five academics, artists, and officials from both the campus community and the greater Connecticut area, including President of the Muslim Coalition of Connecticut Aida Mansour, Mayor of South Windsor Saud Anwar, performing artist Leila Buck ’99, and Associate Professor of French and Letters Typhaine Leservot. With the exception of Leservot, who specializes in issues of gender and Islam in areas such as the North African Maghreb, the panelists originated from various Muslim backgrounds and have lived in majority Muslim communities inside and outside the U.S. As a result, their opinions and commentary on the subjects drew from extensive experiences that provided a wide-reaching, if not comprehensive, perspective on Islamophobia in the West.

As Anwar concisely clarified, Islamophobia is by no means a recent phenomenon in the United States or a sole response to the radical Islamist movements of the 20th century. Anwar explained that, as far back as the 19th century, influential intellectuals—such as “Star Spangled Banner” composer Francis Scott Key—glorified the death of Muslims in foreign wars.

Anwar then explained that the term “Islamophobia” itself reflects a core problem of the ideology: it does not acknowledge that the oppression and marginalization that Muslims and their culture experience in the West is not primarily about mere fear, but rather animosity derived from ancient jingoism and an intense “us and them” complex.

Leservot clarified that this animosity had been entrenched in Western culture so much that, around the founding of the first American colonies, twice as many books were published in Western Europe about the “Turkish Threat,” also referred to as the “Muslim Problem,” as there were published on the discovery of the Americas.

While the panel’s discussions on the foundations of Western Islamophobia were as significant as they were informative, the true highlight came when the panelists each explained how Muslim women have become central to the marginalization of Islam in general. As Mansour explained, there has been a long tradition of  Western thought sexualizing Muslim women, especially in the manner in which they are or are not covered. This borderline obsession with Muslim women’s clothing, among other factors, has led to the depiction of the Muslim man as oppressive and sexist, actively seeking to disenfranchise the women around him.

While this has certainly been the case with certain branches of radical Islamist thought, the panel emphasized that stereotyping the notion of Muslim sexism is foundational to the depiction of the Muslim man as violent and barbaric. More importantly, it allows Islamophobia to be justified due to a twisted form of empathy.

As Buck highlighted from her experience, many Westerners, upon being asked what they think of the Afghanistan or Iraq War, will make statements along the lines of, “I’m not for the war, but against the way they treat their women,” thus utilizing horrendously generalized notions of Muslim sexism to justify the warfare.

Leservot added that such “empathy” for Muslim women in France, expressed through the government’s extensive attempts to ban the hijab from public schools and the burqa from public spaces entirely, has been used as a tool to distract the public from extremely important economic issues, such as the recession and homelessness.

As Anwar concluded, the worst effects of these stereotypes and greater marginalization have been the demonization and misunderstanding of the fundamental principles of Islamic faith.

“Sharia is not law, but principles upon which Muslims lead their lives,” Mansour said.

As Mansour explained, the radicalism commonly and mistakenly associated with Islam is by no means the core of the faith but an extreme interpretation of beliefs that were not initially meant to be institutionalized.

The “Muslim Women’s Voices at Wesleyan” series aims to educate the campus community on the diversity and richness there is to be found in both Muslim heritage and contemporary culture. It should not stop there, however. As Buck explained, multiculturalism is not about tolerance but integration.

As the value of diversity remains one Wesleyan aspires to embody, the series is set to be a critical highlight of this academic year through the cultural boundaries it is already breaking.