LeeSaar the Company Dazzles, Confuses in Performance of “Princess Crocodile” 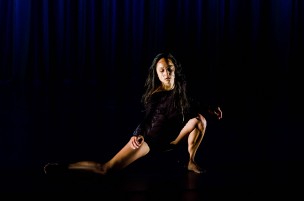 I have always wondered why dance is considered a form of art and not just entertainment. Is it because it can be visually captivating not only to see but to also feel mainly through body movements? Or is it because it’s a form of storytelling or narration in a nonverbal form? “Princess Crocodile,” a dance performance at the Center for the Arts on Friday, Sept. 19, went beyond my expectations for what a contemporary dance piece could be.

The piece started with Hyerin Lee sitting on the floor, gazing at an unknown space far beyond the audience. Her chest barely moved while she sat there in silence, wearing a white leotard under a spotlight that slowly grew to let her tell her story. Throughout the performance, I felt mildly disturbed; I was constantly being played with both visually and emotionally. Maybe that was the ultimate goal of the piece: to draw you in slowly and then start messing with you like Play-Doh. There were times when I felt I was being forced to focus on a certain element, such as the faces of six dancers dressed in wine-red or white leotards, when I intended to appreciate the piece as a whole. Additionally, music and light removed the fourth wall and made me more than an observer, only to bring it back later on, making me an audience member once again and leaving me confused.

“Princess Crocodile” used various styles in its performance. The music ranged from alternative folk to flamenco to electronic, creating numerous distinctive scenes that were interconnected by choreography. Lighting also played a major role in the performance. A dark shade of red built up the tension in one scene, for instance, while a shade of blue and white created a rainy day, and a green light perfectly evoked nature.

The piece was initially wordless, letting the viewers decide what every moment meant and how they might be related to each other. But nearly halfway through the performance, language was introduced. Shortly after, a brief, strange voice-over told the story of Princess Crocodile and her abilities to blow bubbles in different shapes. These words framed my perspective and changed the path of my thoughts. I initially thought of the words as necessary elements in the piece, but later changed my mind. Though it may have been an attempt by the creators to direct the audience toward an intended path of thought, it did not let me put my thoughts together to create an interpretation of my own.

I was also somewhat disappointed by the lack of interaction between the dancers. Besides a brief moment involving two performers caressing each other and another moment with performers under the rain, almost all other moments consisted of individual dancers in their own separate spaces. Watching six dancers each executing different moves was certainly fresh and interesting, but the imbalance between interaction and individual movement unsettled the otherwise excellent piece.

At the end of the performance, I was left with many questions desperately in need of answers. Luckily, the performance was followed by a talk-back with the two artistic directors and choreographers, Lee Sher and Saar Harari. They started off explaining the implementation of the Gaga movement language in their piece.

“It’s something that really helps everyone to connect the possibilities into their life,” Harari said. “It connects the inside to the outside and the outside to the inside. When I say it I mean my inside to what’s around me and what’s around me to my inside…When you do it, you feel that somehow you know it. You know it but you forgot it, which is a good feeling to remember.”

A fellow audience member asked why no male dancers were used in the piece and whether the movements they choreographed could only be performed by female dancers, a question that never crossed my mind during or after the performance.

“I think that six men could do this piece…This piece is with six women because we created it with six women…and I don’t think it’s connected to gender,” Harari said.

Explaining the process of creating contemporary dance, the creators talked about how they first create their piece and then look for a story to describe it.

“It’s a very open thing, it’s contemporary dance, and it’s contemporary art,” Sher said. “There is a sensation there that starts to bloom and grow and becomes something, and slowly something starts to appear, and it’s always very connected to what happens in life, and then we start to recognize that oh, maybe it’s about that and maybe it’s about this. We try to create something that is clear enough in the composition, in the atmosphere, in the choreography, in the music, in the lights, but still keep it open enough for different people to feel themselves and what they go through in life.”

The Wesleyan Center for the Arts and Dance Department planned this event many years ago, and their efforts undoubtedly did not go to waste. Though “Princess Crocodile” is not a perfect piece, its nonverbal storytelling and brilliant use of light and music to create different scenes ultimately created an illuminating experience that left me thinking about it for days to follow.