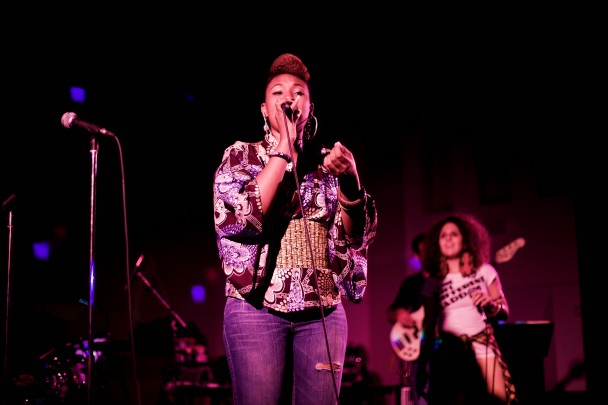 When I began my discussion with Maimouna Youssef, aka Mumu Fresh, we talked about her hometown of Baltimore. I told her about a concert that I attended there last year at the famed Fillmore Theater where the rapper Common performed. She coolly replied:

“Oh yeah, I remember that. I was on stage rapping and singing his hooks.”

Suddenly, I remembered her appearance that night. Youssef, who led the “Freestyling Through the History of American Music” workshop as part of Saturday’s Planet Hip-Hop Festival, started speaking about her work with industry veterans such as KRS-One, Jill Scott, and The Roots. Before she turned 20, she had already toured with The Roots and worked in the illustrious Electric Ladyland Studio. Along with the Roots, she was nominated for a Grammy in 2006 for the album Game Theory.

At the same time, however, Youssef’s experience in the music industry—a respected, but not as widely known, career—has veered widely from both her peers and her luminaries.

“I think that a lot of women feel the pressure to be overly sexualized to be successful,” Youssef said. “And it’s real, I feel it as well. I mean, I’ve had meetings where it has been made explicitly clear that if I want to be successful that’s the direction I should take. But because of my upbringing, that’s not something I want to do. I don’t feel like it’s necessary. I feel like it’s been done already. I don’t like to be a follower.”

That upbringing Youssef references distinguishes her even further from traditional emcees: Fresh is a practicing Muslim, and she believes that her religious history has definitely influenced the way she reacts to societal pressures.

“I was raised Muslim in my household and my mother was very conservative in terms of our clothing,” Youssef said. “Being grown up that way, it makes it very hard for me to just give into social pressures. I would be so far from where I come from. If I face any opposition in the music business, I just try and get better.”

One way Fresh is able to combat an industry where, in her words, “how good you are is the last thing that matters,” is through the diversification of her talents.

Indeed, Youssef’s versatility has allowed her to maintain her success in a fickle business that often capitalizes on the “hot” artist of the moment, then forgets about them only moments later. (Remember Trinidad James, for instance?)

Because of Youssef’s unique background and her refusal to conform to the industry standard of what women in rap should sound and dress like, she may never reach the broad mainstream appeal of Iggy Azalea and Nicki Minaj. But Youssef evaluates her success through a different lens.

“There are certain things I’m not willing to compromise,” Youssef said. “My creative integrity is one of them. I’m at the point now where I’m like really trying to just use my own idea of what success is. Like, am I happy? I travel all the time. I’ve been to four different continents. I try to view it like that and just try and enjoy the gifts I’m able to be afforded because of my art.”

Youssef’s consideration of her opportunities and experiences also allows her to avoid in the future a creative crisis, or, god forbid, peak after only a few years in the business. Think Slim Shady LP and The Eminem Show-period Eminem, or mid-2000’s Lil Wayne. While Youssef acknowledged that the “creative ceiling” is something all artists fear, she reiterated her belief that fighting against becoming complacent is actually a boon to creativity.

Youssef said her competitive, even perfectionist, spirit constantly motivates her to progress. She always strives to make her next verse better then her last, and she said she never feels satisfied that she has shared her entire perspective as an artist. After 20 years of success in the industry, Youssef still has more to say.