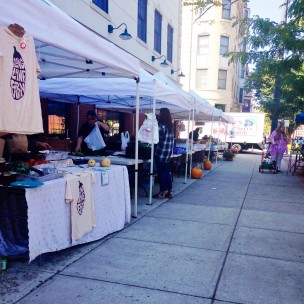 I’ve always found a certain kind of comfort in fall produce. The crunch of a perfectly ripened Empire apple, the warmth of a bowl of cauliflower soup, and the often-spicy scent of pumpkin all make parting ways with the warm months of summer a bit easier to accept. Fall is my favorite time of year as far as food is concerned; to me, there are few things as pleasant as visiting an outdoor market on a brisk autumn morning and perusing the fruits of the farmers’ labor. At the North End Farmers Market on Main Street, Wesleyan students from Long Lane Farm are among the farmers presenting their harvest.

Every Friday from June 20 to Oct. 31, Long Lane Farm’s student volunteers set up a tent outside It’s Only Natural Market (ION) to sell their produce to members of the Middletown community. Joined by other Connecticut vendors such as Beckett Farm of Glastonbury and George Hall Farm of Simsbury, the students do business from 10 a.m. until 2 p.m.

Though the market is only open for four hours, Long Lane volunteer Hailey Sowden ’15 says the day involves much more than simply bringing the produce to Main Street.

“Folks typically start showing up at the farm at 7 a.m. to help with the harvest,” Sowden said. “It’s usually sort of a mad dash, but we get it done. We harvest, weigh produce, load up the table and tent and other market-related stuff and go over to ION to set up.”

According to Holt Akers-Campbell ’16, another Long Lane volunteer, the biggest sellers are usually husk cherries, cherry tomatoes, and watermelons. The farm also sells a wide variety of produce, including kale, collards, squash, heirloom tomatoes, and eggplant.

Like most organic farms, Long Lane must adapt to issues stemming from pests and disease. Though some crops are in poor shape by the end of the growing period, others are much easier to maintain.

“Tomatoes are our biggest producer in terms of weight,” Akers-Campbell said. “We give upwards of 100 pounds a week to Bon Appétit. The kale is struggling a bit now with a lot of insect damage.”

Sowden agreed, adding that many other crops prospered at the farm this year.

“Tomatoes might be the star, but our lettuce was really good this year,” Sowden said. “We were able to harvest it into the summer for a lot longer than expected. We just took out the summer squash, but it also did really well. We were picking it a few times a week and getting pretty big harvests each time. I agree with Holt about the kale—greens are sometimes tricky because in order to sell them they have to look perfect, but insects and other critters love them.”

Sowden and Akers-Campbell are passionate about the produce they sell each week, but their favorite part about working at the North End Farmers Market is getting a chance to interact with the customers who support their efforts.

“The market is a great way for the farm to get involved with the wider Middletown community,” Sowden said. “Oftentimes we’ll meet someone at the market who will then come volunteer on the farm. We get to chat with all kinds of people and learn what sort of things they make with our produce. It’s also great to be able to provide high-quality organic produce to people of all incomes at a fair price. Beyond all of this, the market is also just really social and fun.”

Long Lane also holds open-community workdays every Saturday from 10 a.m. to 2 p.m., when people interested in the farm can join students in tending the crops. Aside from these weekly engagement activities, Long Lane’s next big event is its eleventh annual Pumpkin Fest, which will take place at the farm on Oct. 25. The day features live music, crafts, and (of course) food in celebration of the fall harvest.