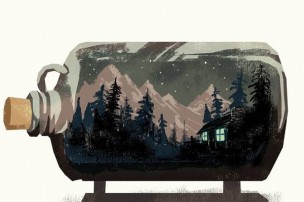 The first thing you observe when you watch Sun Speak play is the chemistry the Chicago duo has cultivated. Matt Gold (guitar) and Nate Friedman (drums) have a Black Keys-esque ability to anticipate one another’s decisions and react accordingly.

Indeed, the two have a long, developed musical relationship that stems back to their time at Oberlin College, from which they graduated just last year. Both majored in music and said they believe the opportunity to interact in and out of Oberlin’s conservatory helped create the partnership they now have today.

Sun Speak’s synchronicity mirrors its style of playing. Gold and Friedman are humble and understated, yet committed to their goals and confident that they can achieve success in music. After graduating, the duo decided to relocate to Chicago and focus on making music full time. They emerged from the studio with Light Blue Light, their debut album, which was released last April. Light Blue Light sounds like the slow awakening from a midday nap. When you wake up, see the sun shining through the blinds, and slowly get ready to resume your day, this is the soundtrack you play.

What makes both Light Blue Light and Sun Speak’s live show so compelling is their ability to play an eclectic mix of rock, jazz, and classical music with subtle hip-hop and African influences. Light Blue Light sounds at times almost ethereal, with simple percussion and guitar parts woven together expertly to create incredibly involved instrumentals.

Their album translated remarkably well to their live performance, and the cozy space of Earth House allowed them to explore the album’s subtleties when they took the stage around 11 p.m. on Friday night. Sun Speak performed for a crowd that clearly wanted an alternative to the raucous scene at DKE or Fountain. Immediately, Speak set a cool tone for their set and the crowd was more than happy to oblige. Soon, nodding and cautious movement quickly turned into more expressive dancing as any inhibitions were lost. Speak’s performance style is decidedly workman-like, another quality the duo shares with The Black Keys. They acknowledged the crowd politely but mostly focused on craftsmanship rather than crowd interaction.

“Thomas in the Whale” sounds even better live than it does on the album, benefiting from drum patterns that swell and emerge fully realized as the song climaxes. “Brain Lake” was one of the more relaxed tracks in a set full of tranquil moments while “Medium Friends” offered a more upbeat vibe. “Friends,” a hip-hop influenced track and one of the highlights of Sun Speak’s set, allowed for some impressive improvisation, a definitive element of Speak’s style and live set.

Though Light Blue Light clearly sounds like a focused effort that never wanders too far from its core, Sun Speak’s live performance allowed the duo to test the boundaries of its material. Indeed, it was Gold’s tremendous skills on the guitar that set up many of the most impressive moments of Speak’s concert, especially on Light Blue Light opener “Harvest.” Gold’s ability to segue from electric to acoustic guitar added a great deal of depth to Light, but was somewhat harder to pull off live without multi-tracking. Nevertheless, his ability to blend his classical jazz roots, which feature heavily in Light Blue Light’s sound, with experimental electric guitar licks makes Sun Speak’s live set a truly appealing listen.