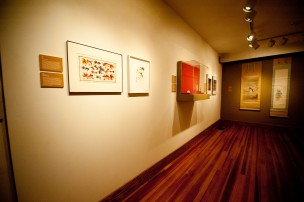 Originating in a class last semester, the “Not of This World” is composed of works selected by students from the Mansfield Freeman collection. The course, EAST253: Practicum in Exhibition of East Asian Art taught by Adjunct Assistant Professor of East Asian Studies and Freeman Center for East Asian Studies Curator Patrick Dowdey, introduced eight students to the literature of museums and the process of curation in general, but with a focus on East Asia.

This spring was Dowdey’s first time teaching the class, a long-time ambition of his. While Clare Rogan, Davison Art Center Curator, teaches a relatively similar course on museum practicum, Dowdey’s was the first to specifically focus on East Asia.

“I wanted to complement that, not repeat it, so we made this exhibition on East Asian art,” Dowdey said.

The course covered the growth of East Asian art collections in the U.S., as well as various exhibitions throughout the region, exploring the differences between the philosophies of exhibition in the Western market as opposed to the different East Asian ones.

“Exhibition is such an important part of our art world, but exhibition is not a part of Asian art worlds.” Dowdey said, “Usually images are seen singly or in a private setting.”

Kaitlin Chan ’17, a College of East Asian Studies major, found most interesting the class’s reach beyond the mere history of the artwork.

“[It’s] about the way art is collected and stored, curated and exhibited,” Chan said. “And how that influences taste and how it influences people’s ideas of culture and how they perceive other cultures.”

Chan and her fellow classmates first learned how to examine artwork in a database before learning how to archive and store it. While its main objective was to exhibit art from East Asia, “Not of This World” is informed by more than just common location.

“We couldn’t have an exhibition that was just [about] Asia.” Chan said. “We had to ideologically examine the artwork.”

The exhibition also explores the mysteries of alternate states, which are widely present in various East Asian cultures. An initial decision to display all the exhibit’s art in pairs allows a deeper look into the present themes of religion, mythology, and narrative through both comparison and contrast.

In one instance, a mid-19th-century Chinese painting is juxtaposed with a painting from 2012, both of which depict fish, a crucial motif in Chinese culture.

“It’s a very mystical and folklore-guided exhibition,” Chan said. “A lot of talk about China, Korea, and Japan that people hear about in the newspapers is very politically and economically dominated.”

As a student, Chan explained that the importance of the exhibition lies in the uncommon opportunity it provides the campus community to actually explore East Asian culture beyond its often limited and narrow representation in the media.

Running through Dec. 5, “Not of this World” is not only critical for those excited by the brand new College of East Asian Studies, but for anyone with a serious interest in exploring foreign culture through its mythology and religion.