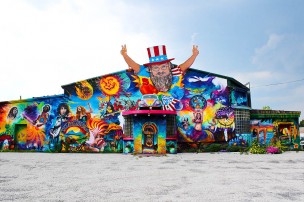 Wild Bill’s Nostalgia Center is a hard target to miss. The building, an old nightclub on Middletown’s Newfield Street that was popular with the mob in the ’40s, is covered in technicolor murals depicting icons of the past. Prominently featured are sinister 1920s clowns, pentacle-bearing mermaids, and a portrait of the Sgt. Pepper-era Beatles covered in vines.

Inside is some hybrid of a junk shop and an antique store, cluttered with oddities from decades past. Beside the front desk sits Laughing Louie, a life-size clown figure from the ’20s that, when operated by its motor, shifts back and forth as if shaking with laughter. According to the owner, Bill Ziegler, better known as Wild Bill, it is one of the two remaining Laughing Louies in the world and the only one that still operates. The laugh box no longer works, but Ziegler, committed to providing customers with an authentic Laughing Louie experience, personally simulates the doll’s original wicked, high-pitched laugh as the red and white clown face wobbles. The effect is an unsettling mixture of sinister and cheerful.

Despite this significant contribution from the Roaring Twenties, artifacts from the 1960s and ’70s comprise the majority of the store’s offerings. Ziegler, an aged hippie with a scraggly gray beard and round glasses, says he remembers those decades fondly. He reminisced not only about the era’s free-spirited culture, but also about the values celebrated then.

“It was a good time,” he said. “Anybody that wanted to work could work all the hours they wanted. There were jobs everywhere. Everybody got money, everybody had fun. It’s not that way anymore.”

Wild Bill’s is perhaps best known for its vintage-style music posters, which it sells to over a thousand retailers across the country. The posters are printed on a 75-year-old Heidelberg Press kept in a building behind the main store. The center also specializes in classic rock records, which Ziegler buys in bulk.

But among the artifacts of Ziegler’s hippie days are some true anomalies. Among rusted novelty lunch boxes and vintage army jackets, for example, stand the jawbone and a vertebrae of a 55-foot sperm whale. Ziegler bought them on a whim when a man whose grandfather was a whaler in the ’50s arrived at the store with a truckload of whalebones and whaling equipment. The shop also carries a sizable collection of taxidermy, which has fascinated Ziegler since he was a child.

One might wonder what is the unifying factor of the merchandise at Wild Bill’s. Ziegler perhaps put it best when he received a phone call from someone interested in selling him a kayak.

“No, we don’t sell anything practical,” he told the solicitor.

This has been Ziegler’s philosophy from the beginning. Ziegler began collecting interesting items as a child and opened his first nostalgia shop in Middletown 30 years ago. Wild Bill’s used to be located in central Middletown, but in 1999 Ziegler purchased the nightclub, eager for distance from the town in order to filter out unenthusiastic customers.

“You’ve gotta want to be here, to come to our store,” he said. “We were on Main Street for a while, and people wander in. It’s a lot of kids that are in the neighborhood and don’t really want to buy anything. Our location now, you have to want to be here.”

And it seems many do want to be there. Ziegler counts Bobby Moynihan of “Saturday Night Live,” ex-mobster Frank Cullotta, and Clint Eastwood among his clients.

In the summer, Ziegler holds horror movie screenings and concerts on the stage in the backyard. Wild Bill’s also hosts community events like paint parties, where participants are invited to freely paint mannequins and large easels, and weekly flea markets. The center additionally serves as a meeting place for the Connecticut Paranormal Investigators, which believes the building is haunted by the ghost of a mobster allegedly buried under the nightclub stage.

On the 40-acre property also sits an old-fashioned funhouse with an elaborate but eerie façade, which Ziegler plans to open this summer. The funhouse has been under construction for several years and was designed by the artist Chuck Burnham, an old friend of Ziegler’s.

Ziegler is also in the process of building a second funhouse, which will house a ride from the 1920s that he purchased from a defunct amusement park. The funhouses were a major investment for Ziegler, but to him, seeing his dream come to life is worth the price.

“I’ve got hundreds of thousands of dollars tied up in the funhouses,” he said. “But I don’t care. I don’t need money in the bank.”

Other major features of the property’s landscape are an enormous Wild Bill bobblehead and a 600-pound Jack-in-the-box head, which pops up with the help of a counterweight made out of whalebones, elk antlers, and rusted tools.

Recently, Ziegler purchased an old bus that runs on vegetable oil. Once he repaints it, he plans to use it to shuttle Wesleyan students to and from campus on weekends.

The center’s motto is “Wild Bill’s is not a store, it’s a way of life,” and Ziegler, who has 48 tractor-trailers full of collectibles, takes this to heart. He considers nostalgia his lifestyle, and though the store struggles financially, he has no plans to scale back the operation.

“I like it and I’ll be here until I die,” he said. “I don’t ever plan on retiring. This is where I belong.”