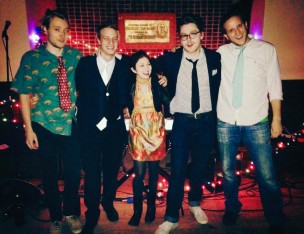 On the radio, on the bandstand, and on Twitter, Molly Balsam ’14 is making a name for herself. As the frontwoman for the student band Kroox, a music and philosophy double major, and a WESU DJ, Balsam is looking to jump from the Wesleyan music scene straight to Nashville. The Argus sat down with Balsam to talk about women musicians, creating a supportive community, and the emotional draw of rock.

The Argus: You play music, so let’s talk about that!

Molly Balsam: Let’s talk about that. I have played music in various ways since freshman year. I didn’t really do my own thing until junior year, when I started my band that used to be called Molly Rocket and the Crooks and is now called just Kroox. And yeah, I’m all about music. I came to Wesleyan knowing I wanted to do music, and then this scene is so vibrant and full of opportunities that I decided to take them all. I literally play every show I get offered, and performing is great practice, so I never turn people down.

A: What instruments do you play?

MB: I play piano, and I sing, and I dabble in drums and guitar. I’ve taken lessons here and there, but piano is my main instrument.

A: What sort of music do you play?

MB: It comes from everywhere. Right now I’m in music major classes, and I’m playing West African drumming…but the music that I generally play is, for lack of a better word, rock music. That can mean so many things, but because I write for piano, it’s very different from your electric guitar-based and generated rock. Even though there’s guitar in my band, it’s not the forefront of the sound. It adds to the rhythmic texture and that sort of stuff. My tags on Bandcamp are “sultry rock,” which isn’t a genre but should be. I always say it’s poppy and catchy and can transfer well to pop music in a live setting.

A: Why pop music?

MB: I guess one of the main reasons I love to perform is I love to bring a sort of energy to people and make them move and have a good time, and that’s what’s amazing about the music scene at Wesleyan: it’s at the forefront of the nightlife, it’s very surrounded by live music. I realized that if I wanted to be in a band at Wesleyan that played a lot, it would have to have all that wall of sound and peppiness to get people moving and wanting to come see you play on a Saturday night; you have to adhere to some sort of popular sound.

A: Besides the commercial aspect, what about rock and pop draws you as a musician? And as someone who’s interested in not just picking up a guitar and playing a few chords, but who’s actually studying music?

MB: I guess the biggest draw for me, there is emotion and what I put into my playing. I mean, I learn a lot in classes that helps me write songs, but ultimately, it comes down to when you sit down at the piano and it just sort of comes out. For me, it comes out as rock and as pop, and I think it reflects on who I am as a person and how I live my day-to-day life, more so than my studies.

A: Last spring, you started this campaign to have a collective of women who play music at Wesleyan, and you were trying to make some changes about the Wesleyan music scene. Can you talk about those?

MB: Originally, I felt sort of on my own as a woman in the music scene on this campus and in general. What I was trying to do didn’t necessarily pick up as much traction at the beginning as I wanted it to, because I wanted people to recognize the fact that musicians can be either men or women, it doesn’t matter, and what comes first is that you’re a musician. But the problem with that or with any strain of feminism or that sort of attitude and trying to accomplish those sorts of things is you have to pull from both ends of the spectrum. I have to acknowledge the fact that I am a woman to then say, “I’m just a musician, and a woman second.”

At this point, we stopped having weekly meetings, but I definitely think that the growth in the music scene has shown a lot of what we’re aiming for. There’s Novelty Daughter: Faith [Harding ’14] is killing it right now, she’s playing almost every weekend. There’s Faceplant, which is an all-girl punk band, and they’re doing some really fun things. Then there’s a couple of girls, Lily Myers ’15 and Kate Weiner ’15, who are doing a women’s music festival that I didn’t even have anything to do with planning. They did it on their own, and that actually made me feel better than if I had gone out of my way to plan something, that other people are picking up on this and wanting to bring it into their Wesleyan circles and scenes.

A: You host a radio show, Girl Power Hour, which also plays into that.

MB: It definitely does. I wanted to find new music and new women musicians, because I realized that my biggest influences are men when it comes to music. Not that that’s a bad thing, but I definitely wanted to open my horizons more. And my co-host, Hanna Bahedry ’14, is also a musician. She doesn’t play in any band but she’s very interested in women musicians as well, and we just came together and were like, “Let’s do this show.” It’s once a week, Mondays at 11 p.m., and we just play whatever female musicians we feel like playing at the moment, and we try and seek out new stuff every week. There’s always a good source of throwbacks, though.

A: Is there something about Wesleyan in particular that makes it difficult for women to start out, or is it a general music problem?

MB: I think it’s both. I think what I initially found at Wesleyan was that there seemed to be—it hasn’t been as apparent this year as it has been in past years and maybe that’s just because I’m a senior and I’m on top and it doesn’t feel this way—a certain group of people that generate the taste making of the scene and are the gatekeepers of the music scene at Wesleyan. I actually wrote a paper about this for a class last semester, which is funny. I think that there is a certain aspect of playing music on this campus that, if you’re a girl, you have to be stellar. You have to be amazing, and you need to kill it and be perfect. And if you’re a guy, there’s tons of bands with mediocre dudes in them. I’m not saying at all that all men on this campus are mediocre, not at all, and I commend these mediocre dudes for playing music, good for you, but there isn’t the same draw for a woman musician.

And I don’t think that’s only Wesleyan’s problem; I think that’s a worldly problem. But this is the sort of campus where it’s so insulated that we have this test ground to try and break that open and see what we can do. I am not amazingly technically proficient, I fuck up when I play or perform, and I still get a great crowd. I’m not calling myself mediocre, but like, I’m not one of those guitar gods or something like that. I’m still having fun and playing and doing this, and I want to make a life out of it, and I think I’m very capable. And a lot of it comes from a lack of confidence, and I’m not going to quote “Lean In,” because I feel like it’s quoted all the time, but it’s essentially that as well. You can’t blame men or women, but it’s both needing to work towards this together, and acknowledging that there is a problem is the first step.

A: Now that you are a senior, and other people can take from what you’ve helped initiate, what are you doing with your last semester?

MB: My last semester is really super-busy for various reasons. I’m doing my own music thesis performance, which is on April 12.  Two and a half weeks, whoa. And I’m in two musicals, one which is my friend’s thesis and one which is Shrak the Musical.

I guess, looking towards the end of the semester, I’m going to do one last final thing, to just hopefully leave on a note where people would want to continue what I’ve been trying to do. And I definitely think people have been taking my words and my actions and started their own communities around them. Like Faceplant, those girls, they have a bunch of other friends and people they play music with, and that’s a younger thing that’s happening on this campus, and I’m so supportive of that and glad that I’m not even that involved in it, because that means it’s more than just me. And that’s great.

A: What are you doing for your thesis?

MB: I’m writing something very different than I usually do. It’s very academic and it’s all based around different rhythms and the idea that my mind is unstuck in time. It’s not anything that I would ever get to do other than for writing a thesis for the music major, so it’s fun. I’m having a bunch of musicians that I’ve played with before and some I haven’t to all play with me, so that’ll be fun. Overwhelming.

A: If you’re planning on pursuing music professionally, how are you going to go about doing that? Are you just going to show up in a city and be like, “Book me for gigs?”

MB: Sort of. I actually spent spring break networking in Nashville. I’m 96 percent sure I’m moving to Nashville after graduating. It’s really cool. People should also move there. I feel like everyone and their mother moves to New York City when they graduate this school, and I grew up in New York City, and I love New York City, and it’s always going to be there, and I just feel like I need to get out. The greatest thing about Nashville, which sort of reminds me of Wesleyan but is even more so, is that music there is a community; it’s completely collaborative and not competitive. I would say this campus has gotten less competitive in the past year or so musically, and it’s been more collaborative, but in Nashville…everyone writes together, everyone plays together, and it’s really awesome. I met a whole bunch of people down there who I’m looking forward to playing with. My drummer, Atticus [Swartwood ’14], might actually move with me as well, we’re not sure. I always can come back and play shows at Wesleyan if you’ll have me.