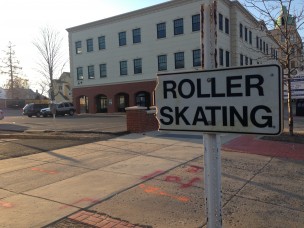 On a dreary Tuesday evening, the Middletown Roller Skating Rink was a refuge from the gray chill outside. As a bubbly Taylor Swift song played in the background, Maria Paquette, a woman in a gray velour sweat suit, said her goodbyes to some regulars, two young children to whom she gives weekly skating lessons.

The children ran up to Paquette and embraced her before leaving.

Paquette has owned the rink for 12 years, and with the exception of the few times a year that her two children help her manage large parties, she runs it by herself. In addition to teaching roller skating classes for children, Paquette runs semiweekly skating sessions for senior citizens, schedules and makes arrangements for several birthday parties each week, and rents the rink out to skating groups.

Paquette moved to Middletown from Peru 21 years ago and became familiar with the rink when she brought her young daughter (now a Wesleyan student) there to skate. After the husband and business partner of the rink’s original owner died, Paquette began helping her run the rink.

In 2001, the original owner announced that she was moving and offered Paquette her position. Then a physical education and Spanish teacher at the now defunct St. Sebastian School, Paquette needed the extra income. Although she initially felt anxious about running the rink alone, Paquette eventually took over. When the school shut down, the rink became

Though not a skater herself (the one time Paquette tried skating, she fell and was bedridden for 15 days), Paquette quickly learned how to teach the sport. Her experience teaching physical education and her university specialty in gymnastics made the transition fairly easy.

“It’s a different discipline, but I’ve been good,” Paquette said. “I’m teaching now figure skating, but I manage fine. I know the mechanics.”

In Paquette’s skating classes, students learn how to stop, shuffle, and eventually how to jump and spin. During lessons, skaters must wear roller skates, which have two wheels in front and two in back. But for open skating sessions, skaters may choose between roller skates and rollerblades, on which the four wheels are positioned in a straight line.

“The rollerblades are easier, a favorite for the kids lately,” Paquette said. “Everybody blades.”

For beginners hesitant to get rolling, the Middletown Roller Skating Rink offers special skates with wheels that can be locked to give skaters extra control. Paquette gradually loosens the wheels so that customers can become accustomed to the skates over time.

Recently, a plastic floor was installed in the rink, which allows for more safety and smoother skating. As a result, skaters are not required to wear helmets or other safety gear when on the rink, so long as they don’t skate too wildly.

“I recommend to mothers and fathers, if they really want to bring the helmets, the wrist and the elbow and the knee pads, you’re welcome,” Paquette said. “But really, it’s not necessary. We don’t have any really bad stuff here.”

Still, the new floor has created a few issues. When the CT RollerGirls, an all-female roller derby team, practiced at the rink, their equipment (which was needed because of the women’s fast skating) left black marks on the floor. Eventually, Paquette had to ask them to find a new practice space.

Indeed, Paquette has no trouble with confrontation. When her students misbehave during lessons or when customers become rowdy during open skate sessions, she threatens to banish them from the rink.

“Sometimes, when they become really wild, I become tough,” she said. “They know. The physical education teacher knows. I’m going to say, ‘Sorry, but I really don’t run with any craziness here.’ Because everybody has to have a good time.”

Paquette has nonetheless experienced her fair share of craziness at the rink. A few years ago, she expelled a rowdy father-and-son pair from the rink after warning them several times to restrain themselves. Later, she found that they had removed the magnets from her car and used them to scratch the car’s surface.

“That’s okay, they never came again,” she said. “Because everybody wants to have a good time, and I really want everybody to really enjoy here. I don’t want the parents to be afraid of some crazy guy that is going to [disrupt] the kids’ skating, because it’s not fair.”

Another time, a woman fell on the floor and appeared unable to move. Paquette attempted to call an ambulance, but the woman’s skating group encouraged her not to, assuring her that the woman’s son, a paramedic, would assist her.

Later, the woman sued Paquette for failing to seek medical assistance when she fell. Ultimately, Paquette won the case.

“It was so fishy, that situation,” she said. “Very fishy. I said, ‘I want to see if this lady went to the emergency room; what is the diagnosis? I want to see everything.’ They didn’t present anything, but they wanted a lot of money. But I won.”

Paquette takes customers’ health and safety very seriously. Now, she calls the ambulance anytime a skater seems seriously injured and makes sure the rink meets all safety codes. Alcohol is forbidden at the rink, the slogan of which is “Healthy Fun for All.”

“Alcohol, as soon as you are on skates, you are in the emergency room,” Paquette said.

Paquette views skating as a wholesome alternative to the destructive behavior local minors might engage in elsewhere. She aims to create a safe space for families to spend time together and for children to learn the benefits of a healthy, active lifestyle. In addition to being convenient in cold weather, the rink fosters connections between Middletown residents and encourages familial bonding.

“This is the place where the kids in Middletown don’t get into trouble because this keeps everybody together, keeps the family together, and keeps the kids out of problems,” she said.