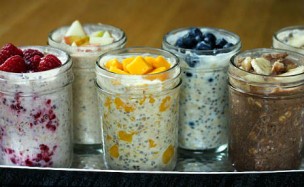 It’s the week after spring break, and you’re coming to terms with the fact that you no longer have access to Mom’s home cooking. Despite having just arrived back at Wes, you’re already starting to feel the weight of your workload dragging you down. Maximizing sleep time becomes your top priority, and eating a hearty breakfast seems nearly impossible. In the mad dash to make it to your morning class on time, you often overlook the first meal of the day.

Though staying healthy is contingent upon receiving the proper amount of shut-eye, the importance of morning fuel should not be ignored either. In fact, a 2013 study published by the National Center for Biotechnology Information concluded that making breakfast a habit has a tendency to improve academic performance. After doing some research of my own, I found the perfect on-the-go concoction that preserves both quality and convenience while ensuring a nutritious start to the day.

Because I was trapped on Long Island for the majority of my break, I experimented with different recipes for refrigerator oatmeal. This no-cook mixture of yogurt, oats, milk, and chia seeds is meant to be eaten within one or two days of preparation; it is best stored and served in individual mason jars.

I tested several flavors to see which combinations I found most satisfying: banana-cocoa, blueberry-maple, and peanut butter-banana each had trial runs, but the variety I enjoyed the most turned out to be apple-cinnamon. Despite its goopy texture and somewhat unattractive appearance, the end result both tasted and smelled just like apple pie.

And what could be a better start to the day than dessert for breakfast?

2. Put lid on jar and shake until well combined.

3. Remove lid, add applesauce and stir until mixed throughout.

4. Return lid to jar and refrigerate overnight or up to two days. Eat chilled.