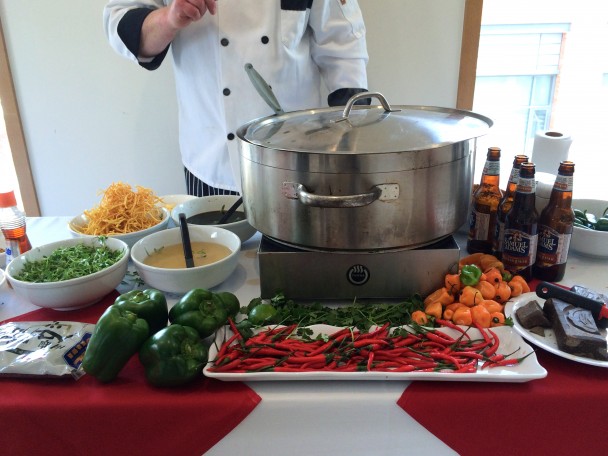 On Tuesday, Feb. 25, Bon Appétit Management held the first annual Wesleyan Chili Cook-Off in the Usdan Marketplace. According to a promotional poster, the event was an attempt to solve an age-old question.

“From the time the first person on Earth mixed some chili peppers with meat and cooked them, the great chili debate was on: who makes the best chili, and what makes it the best?” the poster reads.

In other words, hundreds of Wesleyan students spent their lunchtime trying different types of chili.

In order to help the students judge, Bon Appétit posted chili guidelines, which included specifications about taste, consistency, aroma, color, and bite. Although none of the three chilies in the competition satisfactorily fulfilled all five categories, and although they may not have technically been “chili” based on the Merriam-Webster definition of “a thick sauce of meat and chilies,” they were all delicious. Executive Chef Brian Dagnall’s spicy shanghai beef chili ultimately won the competition.

The first chili I tasted was a white bean chicken chili with jalapeños. It was the least-decorated chili stand, garnished with only cilantro, green peppers, and tortilla chips. I was drawn to it in part by of the lack of a line and in part by of the wonderful, comforting aroma. Created by Production Chef Ernie Arroyo, the taste exemplified the ideal set by Bon Appétit, which stated that the “flavor of chili should be the blend of ingredients with no particular dominant taste.”

It was a wonderful harmony of chicken, spices, and vegetables. The chicken seemed to be of remarkably good quality, all white meat cut into perfect, small bites. However, the consistency was more like that of a thick soup than a true chili. The majority of the white beans seemed blended in, with only a few whole beans remaining. The seasoned tortilla chips, offered as a topping, did a lot to make the texture of the chili more interesting. Many Wesleyan students voted this chili as their favorite, yet when I asked what they found appealing about Arroyo’s chili, the most common answer was, “I don’t know.”

Next, I tried the vegan chili with polenta croutons, made by Sous Chef Russell Delarie. Surrounding the chili stand were eggplants, squash, asparagus, and lentils, which drew me in immediately. I’ll start by saying that the polenta croutons were absolutely amazing. The outside of each was hard, almost crunchy, with a very soft inside. However, I do not think that they complemented the chili. In contrast with the broth-like chicken chili, the vegan chili seemed more like cooked vegetables than anything else. The tiny grains of quinoa filled all the cracks made by the larger vegetable chunks, absorbing whatever liquid remained. The polenta croutons made it even drier.

I also found the vegan chili somewhat bland, lacking the “nice bite” Bon Appétit identified as an important chili attribute. On the positive side, the color was very nice. According to Bon Appétit, “chunky ingredients should be easy to identify,” and they certainly were.

Student reviews of the vegan chili were very mixed. Some, like Julia Clemens ’16, were weirded out by the quinoa. Others praised it, proclaiming it their favorite, including non-vegans Tess Morgan ’16 and Giselle Torres ’16.

“I like that it’s less liquidy, and that it’s more consistent,” Torres said. “It matches the textures of the vegetables used.”

However, Morgan favored different attributes of the chili.

“I liked that it combined a lot of different flavors and had lots of different vegetables, and it seemed healthy,” she said.

Finally, I sampled the spicy shanghai beef chili, which was my personal favorite. Dagnall made this chili, adapted from a 2009 New York Times recipe, at his chili station, providing a live demo of sorts. The chili was surrounded by chocolate, peppers, cilantro, and a teeming crowd of students. Dagnall topped it with crispy chow mein noodles, microgreens, and a sliver of lime. The texture was phenomenal, though slightly too oily for my taste. The bite was just what I look for in a good chili, yet the flavor was far from typical.

“Traditional food is kind of going out the window,” Dagnall said. “It’s more about fusion now.”

That philosophy seems to have secured his victory, as multiple students commented on the unique complexity of the dish, which contained ingredients ranging from black beans and tomatoes to chocolate and beer. Even fellow chefs Peter Cotrona and Crissie Dimanno were impressed.

“It’s really complex and has a lot of different flavors,” Cotrona said. “It’s got just the right spice.”

As the victor of the cook-off, Dagnall earned bragging rights. However, the competition was never really about winning for him. Dagnall said that it was important simply because it was fun and broke up the monotony of the day. Students felt much the same way, caring little about the ultimate victor.

“The chicken chili was my favorite, but what matters is that I got to eat it,” said Cheyanne Williams ’17.