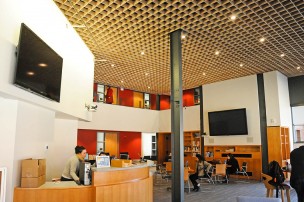 As of this semester, the University has updated its policy on charging students seeking credit for summer internships and will no longer require a fee for the .25 credit, or what the University calls the Quarter Credit.

In order to receive credit for an internship, students would enroll in the course CSPL 493. Students can apply for credit for either an unpaid or paid summer internship. The University Career Center website explains the necessity of the CSPL course:

“To guard against the use of interns as a source of free labor and the possibility that unpaid internships might be substituted for entry-level jobs, the U.S. Department of Labor in 2010 issued a set of rules under the Fair Labor Standards Act of 1947,” reads the website. “These rules indicate that interns should derive benefits from unpaid internships similar to those they would receive in an educational setting.”

University President Michael Roth commented on the reasoning behind students’ need for credit for summer work.

“I should say that I’m not a big believer in internships because I think people should be paid for their work…but I understand why businesses do them and a lot of students think they are really great,” Roth said. “I understand that students need to get some sort of credit for insurance reasons and for the companies, but then they have to pay for the credit [even though] many of them don’t want the credit. So it’s a vicious circle and some schools make a lot of money this way.”

Roth explained why the University has required students to pay for the summer credit in the past.

“The reason we charged [students] at all was if you start saying, ‘You can take credits for free,’ who would pay?” Roth asked. “And we are in a situation where, like it or not, the majority of our expenses at the University, those expenses are paid for with tuition funds. So it seems like it could be a slippery slope.”

Matt Burgunder ’15 described his experience applying for credit for his internship over the summer of 2013.

“The experience was minimal,” Burgunder wrote in an email to The Argus. “The registration was smoothly executed by the Career Center, but there were forms to be filled out…. I paid the fee [and] I wrote a short report…on my experience, which took a comfortable hour. I got 0.25 credits, which I don’t need.”

Marissa Schnitman ’14 also paid for credit for her internship during the summer of 2013, though she found the credit unnecessary.

“I…paid $700 for an internship last summer that I didn’t want credit for,” Schnitman said. “It wasn’t going to help me towards graduation but my intern supervisor needed me to get credit.”

Roth explained the logic behind the University’s change in policy.

“It did seem to be, on the face of it, unfair,” Roth said. “We’re not actually teaching [the credit]. So if you want to take a tutorial with [a professor] during the semester then it’s free, but if you want to take a course with [a professor] in the summer you have to pay, because someone has to pay [the professor to teach], it’s only fair. But with the internships there is no [professor to pay], it’s Comedy Central, or Goldman Sachs, or Teach for America.”

Some students saw their summer internships as worth the price of the fee.

“Overall, the ‘real’ loss is the price paid for the fee, and obviously, I would prefer keeping the $700,” Burgunder wrote. “That said, the best thing that could have happened to me was the internship experience, and I am incredibly grateful for all the opportunities that came with the internship too. Is the experience worth $700? Absolutely. Could it have been done without? Maybe, but I might not be familiar with all organizational details that allowed this internship to exist.”

“It seemed to add insult to injury to ask [students] to pay,” Roth said. “…I asked for a policy change that would create a narrow path to be able to get the credit you need for the internship but then not have to then pay for the credit that you didn’t really want to get in the first place.”

Alexandria Williams ’15 had the fee for her summer internship waived by the University. She described her experience applying for credit.

“My summer internship involved working with a non-profit that could not afford to pay me,” Williams wrote in an email to The Argus. “As [a] student that is already saddled with the cost of paying for tuition, books and traveling expenses, taking [an] unpaid summer internship was definitely not the best financial decision. Being able to get credit for my internship and having the cost of receiving credit for it waived made my internship both personally and educationally enriching.”

The transition away from charging students for credit was welcomed by most students and praised as a development that could allow more students to receive credit for their summer work.

“Waiving internship credit fees across the board has the potential to incentivize capable and creative students to take on internships at non profit companies,” Williams wrote. “This new policy change is a wonderful social benefit.”