College Birthdays: When Cake Is Enough 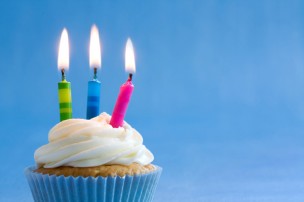 As a rule, birthdays away from home can be very hit-or-miss. Especially in college, it can be daunting to ask your circle of friends and acquaintances to step away from their own lives for a day in order to celebrate you. Yet if you’re too nervous to ask for the attention, then you risk feeling under-appreciated on one of the most important days of your life.

Instead of enjoying yourself, you wonder why no one remembered, or why the gestures of the ones who did were so minor. At the beginning of freshman year, the chances of such disappointment are particularly high. While you’re still discovering which of your many orientation besties will become your real BFFs, you may be the friend whose birthday brings everyone together, or, more likely, the one whose day everyone awkwardly forgets.

Fortunately, my first foray into college birthday traditions was mostly successful. Since two of my friends share the same birthday (Nov. 27), I figured it was time to shower them both with love without being too overwhelming.

After sneaking two whipped cream-topped chocolate tarts out of Usdan, I acquired candles and colored sprinkles from Weshop to complete the effect. At this point, however, the birthday stories of my two friends diverged. One got horribly, horribly sick and couldn’t eat a thing, let alone something as stomach-churning as a chocolate tart. Since it was just before Thanksgiving break (and my friend spent most of the holiday recovering), that tart sat in my fridge for a week or so, still bearing the single birthday candle I had stuck into it. Every time I opened the fridge, I was reminded of the old adage, “It’s the thought that counts,” as I wondered what I would do with the leftover sprinkles.

Meanwhile, my other friend’s birthday took a much more uplifting turn, and it even prompted my first fire violation in Usdan under the most pleasant of circumstances. At a tableful of friends whom I had called together via text, I ducked underneath my chair and lit the candle on my friend’s chocolate tart, which proved quite difficult with the flimsy book of matches I had brought. Luckily, before the guest of honor became too concerned and ruined the surprise—she had accused me of looking “shifty” as I whispered to each person to be ready to sing—I popped up from under the table with the tart and led the group in a round of “Happy Birthday.” It was, and remains, one of my sweetest memories at Wes.

This past Saturday, I met up again with friends for a birthday occasion, this time on a mission of much greater culinary sophistication. One intrepid friend had tracked down the birthday girl’s favorite recipe (crumb cake, made by her mother) and amassed the ingredients so that we could bond over a baking party before surprising her with the cake the next day. Though I have yet to experience this ritual, I can only imagine how simultaneously heartwarming and embarrassing it is to be presented with a homemade cake in Usdan and to blow out the candles in front of not only your cheering friends, but also an entire cafeteria of spectators.

Regardless, the cake was a delicious success, and the hassle of hiding crumb cake under clothing in a bag was definitely worth the birthday girl’s reaction.

Now, as I write this, I’m waiting for midnight to strike to celebrate one half of yet another double birthday at Wes. Good friends, red velvet cake with your name in icing, and plastic plates on which to enjoy such a delightful confection—what more could you want out of a birthday in college? Okay, maybe a party, too, but no one said anything about forgetting that part.