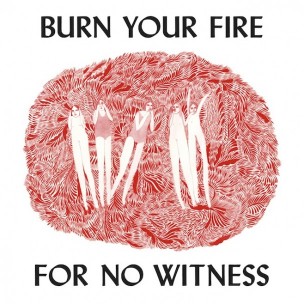 To me, the word “timeless” has always sounded like an insult. For one thing, it’s just an impossible adjective. How could anything be extracted from its aesthetic context and deemed appropriate for every era? It’s a silly conceit. Nothing’s timeless. Does it sound stripped down and gritty? Definitely punk influenced. Synth heavy? ’80s new wave snuck its way in there. And what we do call timeless often seems to be, well, boring. It’s a bad kind of retro, refusing to commit to making any emphatic musical statements in exchange for half-heartedness.

But Missouri native Angel Olsen’s Burn Your Fire for No Witness is making me rethink my disdain for the word. It’s so often the explosions that attract attention. The new face, the new sound, or the crazy backstory; while none of these alone can make an indie album a hit, they certainly help. Angel Olsen isn’t exploding. She’s no wunderkind at 27, and has already built an admirable rock résumé. Olsen has one solo album, 2012’s Half Way Home, under her belt, as well as an extensive work history with the likes of Bonnie “Prince” Billy and Wilco. Her sound isn’t particularly innovative: introspective, lo-fi, and folky, something like Chelsea Wolfe meets Vashti Bunyan, with a dash of Nico.

Then what singles out Burn Your Fire for No Witness for the critical praise that’s been heaped on it? Well, the songs. She’s perfected songwriting in the pop-folk model: melodic, satisfyingly structured, and honestly emotional without veering into the self-indulgent. Classic, guitar-driven tunes are clearly Olsen’s comfort zone, but she wears a lot of hats within her range. On “High & Wild” and “Iota,” she channels 60’s chanteuses like Francoise Hardy, and, quoting Hank Williams, sings “I feel so lonesome I could cry” as she breaks into a foot-stomping, alt-country “Hi-Five.” She taps Liz Phair on the grungy and energetic “Forgiven/Forgotten.”

Olsen’s band supports her on most of the tracks, though the arrangements tend toward the sparse. Still, when it’s just Olsen and her guitar, the effect is startlingly intimate, almost confessional. On “Enemy,” she sings, “Am I the ugly one?/It’s easy to see past all the kindness that you’ve offered me/it doesn’t last.” It’s a pleasant enough song, but it’s moments like these when the wheels start to come off. It’s a sweet bit of ear candy, unremarkable and easily palatable to any folk lover. Perhaps it’s the bad kind of timeless. The Album closer, “Windows,”  saves the album’s second half, starting as an echo and building to a thunderous, multi-layered roar.

It’s a solid, staid, and satisfying effort. Olsen is no phenomenon, more likely to attract polite applause than deafening cheers. But this has one huge upside: she’s unlikely to burn out or disappear. This is a mature release from an accomplished artist. It’s not terribly exciting. But Burn Your Fire for No Witness evokes emotions that are far less fleeting than excitement. It’s, well, timeless.