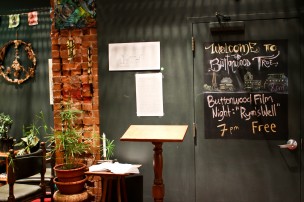 Director of the Buttonwood Tree Performing Arts and Cultural Center Anne-Marie Cannata came to our interview bearing gifts. After introducing herself with a warm smile, she produced a foil-wrapped plate and handed it to me.

“I brought you a piece of chocolate cake,” she said. “I just hate being late to things.”

Cannata can hardly be blamed for running behind schedule. She took over as the Buttonwood Tree’s director just under six years ago and essentially runs the nonprofit organization by herself. She is responsible for everything from booking performances to writing grants and replacing the toilet paper. Save for the part-time assistance of a bookkeeper, a plant caretaker, and a work-study student from Wesleyan, the Buttonwood Tree is a one-woman operation.

Furthermore, Cannata is still learning the tricks of the trade. Prior to her involvement with the Buttonwood Tree, also known as North End Arts Rising, Inc., Cannata worked as a dental hygienist and in the food industry. Despite her lack of experience in the arts, she was drawn to the organization’s vibrant energy after attending a few Buttonwood Tree events as a patron. Cannata volunteered as a grant writer there; three months later, she joined the board. A year after that, then-director and Buttonwood Tree founder Susan Eastman Allison ’85 announced that she would be stepping down from her position. The board seriously considered shutting down the organization, which was floundering, but Cannata remained determined to conserve it.

“I was one of the ones that didn’t want to shut it down and the only one that was available to keep it going, so even though I had no experience in the arts, no experience in administration, I said, ‘Well, I’ll do my best,’” she said. “So here we are, all these years later, and I’m still trying to do my best and still kind of fumbling my way through.”

If Cannata is fumbling, it doesn’t show. With musical instruments and dried flowers in t

he shape of a peace sign adorning the exposed brick walls, the Buttonwood Tree serves as a hub for Middletown’s creative community. While I waited for Cannata, two yoga instructors sat at a rusty table that looked like discarded patio furniture, discussing the Grateful Dead and negative energy. During my interview, a young, mellow man inquired about a prose open mic event he read about on a poster. Cannata provided him with details and encouraged him to stop by.

“That sounds pretty nice,” he said, before taking off.

The center is perhaps most renowned for its jazz and bluegrass concerts, which usually take place on Friday and Saturday nights, but events at the Buttonwood Tree vary widely. They include art shows, poetry slams, and tai chi classes, and can draw audiences of as few as 2 or as many as 50. Cannata investigates potential Buttonwood Tree performers before hiring them, but she is generally willing to branch out and experiment if she thinks the event has a chance of attracting patrons.

“Anne-Marie is very open and receptive to that, to people in the Middletown community just wanting to use our space, and that’s what I think is really great,” said Elizabeth Halprin ’14, who began her work-study job at the Buttonwood Tree two years ago. “It’s just a place for people in Middletown to come and do whatever they want and come together in an artistic way.”

Cannata’s vision for the Buttonwood Tree keeps in line with the mission that Allison and her husband, Stephan, had in mind when they founded it. When, in 1990, the city’s Commission on the Arts suggested they convert the bookstore they ran into a non-profit arts organization, the Allisons embraced the idea with open arms. They had noticed the need for an arts center in Middletown, particularly in the then-impoverished North End.

“We didn’t want to keep anybody from the arts,” said Stephan Allison, now the city’s arts administrator and a DJ for WESU. “Being in the North End, it’s always been an area of poverty, so it’s kind of rough. I know the situation works a negative way on your mind, and so we felt it’s important that the arts are accessible.”

Sustaining the Allisons’ commitment to providing equal opportunities, Cannata doesn’t charge guests for events; she only suggests donations. Cannata said she welcomes visitors from all walks of life to the events.

Since the center’s early days, the Middletown community has supported the venue’s mission wholeheartedly. When a fire destroyed the Buttonwood Tree’s original venue on Rapallo Avenue in 1995, Oddfellows Playhouse provided the organization with a space in its building. The fire left the Allisons eight months behind in rent, but their landlord made allowances for them because he identified with the organization’s goals.

“He appreciated what we were doing and he was willing to stick with us,” Stephan-Allison said. “And so he did. He let us ride eight months until we could get the grant money to pay for it.”

The Buttonwood Tree continues to foster a tight-knit, caring community. Patrons bond not only over a shared appreciation for the arts, but also often over shared pasts. On several occasions, former childhood friends and classmates have crossed paths at the Buttonwood Tree. Cannata has even helped set up four couples that are now engaged or married.

“It’s a great space for community to meet each other and meet like-minded people,” she said. “I see it happening all the time and I try to introduce people to each other, too, as we go through the evening, and it works pretty well. People really like meeting other people here. It’s just amazing.”

Still, The Buttonwood Tree, now located at 605 Main Street, has seen its fair share of hard times. In the early 2000s, and again after Susan Eastman Allison’s retirement, the center grappled with the looming threat of closing due to financial shortages. Although the center still struggles to raise funds, Cannata has strengthened the organization since taking over as director by broadening its focus. The Allisons specifically emphasized music when they ran the Buttonwood Tree, but Cannata now welcomes hypnotists, yoga instructors, and homeschooling programs to utilize the space.

“Basically, what we did in the arts, she’s doing in a more general way for the local community, and I think that that’s within the mission statement that we set up when we organized it,” Stephan-Allison said. “I think it’s evolved to the point where it knows what it is for the community, but it’s still a day-to-day struggle for survival.”

Cannata hopes to alleviate the struggle by building up and diversifying the organization’s board. She intends to find a dedicated treasurer and secretary to assist with fundraising and planning, and possibly add a Wesleyan student to the board to keep the organization in touch with younger generations.

“I’d like a good cross-section of people who are committed to keeping this organization alive and thriving,” she said.

In the meantime, Cannata is working hard to make the Buttonwood Tree as accessible and utilized as possible. She encourages performers and teachers to use the space in creative ways, thereby garnering support from the organization’s community.

“I’d love if the space was used 24/7,” Cannata said. “I try to keep it as busy as possible. I really want to enliven the neighborhood and keep people flowing in and out and keep music and the arts really flourishing in this space.”