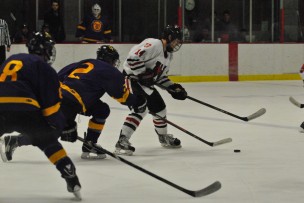 The men’s hockey team may have found the winning formula this weekend after two huge home wins against playoff-bound squads Williams and Middlebury. Both these games were payback for the Cardinals, as they lost to each team earlier in the season. After struggling for most of the year, Coach Chris Potter adjusted some of the lines, and it looks as if the team has hit their stride at just the right time.
“We have to act as if every game right now is a playoff game,” said Alex Carlacci ’16. “With a close race between three teams for the final two playoff spots, the team needs all the points they can get and cannot afford to lose any more points. Losing is no longer an option for us.”
Each game showed a different strength for the Cardinals, as they found the back of the net seven times against the Ephs on Saturday.
“In my opinion, I was more impressed with the blowout win over Williams,” Carlacci said. “Williams was ranked as the number nine team in the nation prior to our game. They also have never allowed more than three goals this year. After the big win against Williams, I knew that we were going to beat Middlebury.”
Starting goalie Sean Dougherty was pulled after letting up four goals during the first period.
“I personally don’t care who’s standing across the rink from me,” said Dawson Sprigings ’17. “As a team, we were more concerned with Williams’ strong team defense. We knew their goaltender doesn’t tend to see a lot of action and we felt that if we could get to them early, it would spark a new type of adversity for them that we could capitalize on.”
The line of Carlacci, Terence Durkin ’16, and Jaren Taenaka ’16 led the Redbirds this weekend, scoring five out of nine of their goals. Against Williams, this line certainly held their own, outscoring the Ephs’ whole team, 4-3.
“It’s easy to get a few points when you’re playing with guys like Carlacci and Taenaka, who work hard on the forecheck, come up with loose pucks, and capitalize on opportunities,” said Durkin. “We just like to have fun out there, and it’s even more fun when we can help the team get some big wins.”
Carlacci’s first of two goals on the evening came after he gained control of the puck behind the net and wrapped around it, before firing a shot past the goalie for a 5-0 lead.
“Since Williams recently changed the goalie, I knew that any shot would be a good shot, especially when up 4-0,” said Carlacci. “So when I saw some open space in front of the net, I was just thinking to get the puck on net any way possible and hope for the best. Luckily, the puck was able to get by the goalie and find its way into the net.”
Against Middlebury, the defense, led by Sprigings, held their own against the Panthers, winning a tight game 2-1.
“This weekend was a big step for us,” Durkin said. “From the net out, we were solid, with a good defensive zone that allowed us to get some good offensive chances. We need to keep the momentum gained this weekend going through the end of the season.”
Durkin scored the game’s first goal after Carlacci forced the turnover and Taenaka took the puck and traveled behind the net. There, he delivered a beautiful pass in the slot that landed right on Durkin’s stick, and eventually in the back of the net.
“Carlacci is always flying on the forecheck and causing problems for the opposing D,” Durkin said. “He was able to cause a turnover when Taenaka picked up the loose puck and made a great pass to the slot and I was lucky enough to get a good shot off.”
The third line for the Cardinals has been playing exceptionally well, and may be the key to a successful playoff run for the team.
“The three of us have good chemistry together,” Carlacci said. “We all have the same playing style. Jaren, Terence, and I are also all very close off the ice and spend most of our time together. The three of us love to get together and watch a movie to help us relax the night before games.”
There were only two games for Wesleyan this weekend, but if it’s any indication of what is to come for the team, fans should be ecstatic.
“We’ve been struggling this year to finish games and control leads, but this weekend we were able to do that,” Durkin said. “We were able to score some goals, and play sound defense and the confidence we gained this weekend will be crucial going into the last two weekends against three really tough teams.”
The team will hope to continue its success, starting with next Friday, Feb. 14 at Colby and following that, Saturday, Feb. 15 at Bowdoin.
“The team has lots of confidence right now,” Carlacci said. “It’s always good to be playing your best hockey late in the season, and that’s what we feel we are doing right now. Wins against elite teams are what it’s going to take in order to achieve our goal, and that’s what we showed we could do this weekend.”
Wesleyan will hope to avenge these losses, as both teams defeated the Cards earlier in the season, each by one goal, including an overtime thriller against Colby.
“I feel extremely confident in our group,” Sprigings said. “I think everyone’s excited to head up to Maine and get some points that we believe we gave away in our first meetings. When it comes to playoffs, just as with any single elimination tournament, all you need to do is get in and then anything can happen.”