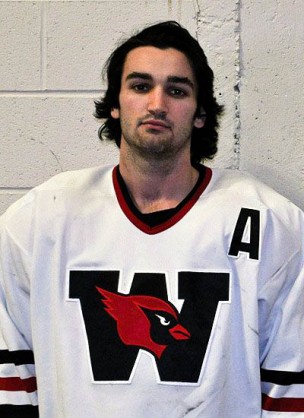 It’s time for the men’s hockey team to put up or shut up. No one knows that better than Assistant Captain Tom Hartnett ’14. Along with his fellow seniors, the forward is trying to will his teammates to a deep playoff run, something unprecedented for these skaters. They will have to improve on all facets of their game, as they are currently in the bottom three of most statistical categories in the conference.

Hartnett has nine goals and seven assists on the season, which puts him at just under an average of one point per game. The Argus sat down with Hartnett to chat about the team’s play up to this point, the upcoming game against Williams, and the steps that will be necessary to make a bid at a conference championship.

The Argus: At the moment, the Cardinals are 3-8-1 in conference play with six games remaining. What do you think has been the biggest problem with the team this season?

Tom Hartnett: I think we’re a young team and we may not be in the position that we wanted to be in, but in parts of the game last weekend, we found ourselves. It took us a while to find what type of team we were, and this weekend I think we did, despite not getting the results that we wanted. We found out how we wanted to play and how we needed to win, and that is a big step going forward.

A: Despite playing under expectations up to this point in the season, this team has a ton of potential, as well as enough talent to beat any team in the conference. What do you think the key to playing well the rest of the way will be?

TH: We’ve gone through a lot of adversity, losing close games and leads. It’s almost better that that didn’t happen late in the year, during the playoffs. We’ve learned from it, and we know what it feels to be up 2-1, but we also know what it feels to be down 2-1.  That’s how most of our games in the playoffs are going to end up: some in overtime, even double overtime.

A: You’ve worn the number 21 on your jersey during all four seasons of your Redbird career. Is there any significance to this decision?

TH: I was 24 all throughout prep school, and then another freshman took the number, but ended up transferring. I was faced with a decision, but decided to keep 21.

A: How has being a captain on the team this year changed your perception of how you practice and prepare for games?

TH: I don’t think it has. No matter what year…or position on the team [you are], the way you handle yourself and prepare for games, it should all be the same. Guys voted for you or coaches chose you because of your habits in prior experiences. That’s the same for [Captain] Keith Buehler [’14] and [Assistant Captain Brad] Improta [’14,] who both practice really hard and lead by example.

A: Every great team needs to evoke chemistry with one another in order to be successful. How has the team bonded together over the season?

TH: I think well. That was one of the problems that we had in the beginning. We didn’t have the chemistry and we weren’t really playing together, but in the last couple of weeks, we’ve meshed pretty well. Keith and me have played together for a while, and Brad and me have played together for seven years. A lot of the guys have figured each other out and see who they need to play with. Even if you jump on a line with a guy you haven’t played with before, you’ve seen him play in practice and got to know him, and that really helps with a young team.

A: Many first-year players, including James Kline, Nick Malone, Dawson Sprigings, and Elliot Vorel, are all making big impacts on the team this season. How has it been playing with the new guys?

TH: [Vorel] obviously had a great start, and he’s still putting up points. Kline has been steady almost all throughout. The defensive backend with Malone, Dawson, and Robby Harbison [’17] has been great, and we need a little bit of that. It’s nice to have the scoring spread out a little bit with all these freshman.

A: Wesleyan has some of the rowdiest fans in attendance at home games in the entire conference. How will playing behind such a raucous fan base this weekend help augment the team’s morale?

TH: It’s awesome playing in front of those guys. It’s a small school, so everyone knows each other. We feed off the energy they bring and try to return the favor here and there.

A: Williams goaltender Sean Dougherty is currently leading the conference with .944 save percentage, as well as only allowing 1.51 goals per game. How does the team try to force the issue and score against the Ephs?

TH: He’s very good, but they also have a great defensive core, so I think that we have to take away his eyes and let him not feel comfortable. With that, when you’re agitating the goalie, shots will get through, and even the greatest goalie in the world can’t save everything.

A: The Ephs are ranked third in the conference on the power play and first in the league in penalty killing. How do you prevent Williams from getting on the power play, and what’s the secret to trying to score on the man advantage?

TH: We can’t take penalties. You’re not going to go through a whole game without penalties, but we need to limit them. We can’t come out Saturday and commit six or seven penalties. Their penalty kill is good and a little different from Amherst’s, where they run at you. We’ve been practicing the power play, but we have to put some pucks in the net. Last time against them, a bounce here, a bounce there, and we win the game.

A: Last year, Wesleyan lost in the first round of the playoffs to Trinity, 5-4, a game that went into overtime. How does that heart-wrenching loss fuel the team’s fire to improve on last year’s finish?

TH: That loss was terrible, and I know that all the guys who were there don’t want anything like that to ever happen again. I think the freshmen know that that was something that we can’t have happen. That’s fueling us a little bit. That’s just not going to happen again.

TH: That we made a run late. We’re not where we want to be or where we thought we would be, but this is our position right now. It doesn’t really matter because once we get into the playoff, we’re going to make a run. It doesn’t matter what you did, just where you finish.