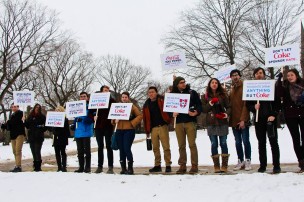 On Jan. 26, University students held the second college protest against the Coca-Cola Company as part of the larger “Anything But Coke” campaign. The first protest was held at Carnegie Mellon University. The campaign, organized by Jeffrey Kasanoff ’15, is designed to protest LGBT rights abuses in Russia by boycotting sponsors of the 2014 Sochi Winter Olympics, primarily the Coca-Cola Company.

“We’re following the example of some other activists who have done this in London and Times Square,” Kasanoff said. “We have signs, and then we will be taking donated Coke products and some generic cola, and then we’ll be doing a Coke dump. Obviously, we’re not spending any money on Coca-Cola. The idea is just to show that we don’t value their product at this point if they’re not willing to speak up for people in need.”

“I’ve been paying attention to what’s been happening in Russia for a while now, and it’s quite disturbing,” Kasanoff said. “There [have] been a lot of hate crimes over there. A lot of gay people have been…attacked when protesting…[and] a couple of people have actually been abducted from their homes.”

Kasanoff fears that more LGBT discriminatory laws could come into effect after the Olympics.

“It’s especially concerning because we think that it’s just going to get worse,” Kasanoff said. “A lot of people are saying now that as soon as the Olympics end and there’s less focus on [Putin], he’s going to pass a bill that would take children away from same-sex couples. So that’s the issue.”

Kasanoff chose to focus on protesting the Coca-Cola Company rather than simply the Russian government because of the company’s sponsorship of the Sochi Olympics as well as its future investment plan in Russia.

“We considered at first just protesting the law, but we realized pretty quickly that probably wouldn’t accomplish much because obviously Putin wouldn’t care,” Kasanoff said. “We decided instead we would protest Coca-Cola, because not only are they sponsoring the Olympics in Russia, but they are in the middle of this huge deal: a five-year, three billion-dollar investment in the Russian market.”

On Jan. 19, Carnegie Mellon University staged the first “Anything But Coke” protest. The demonstration caught the attention of the Coca-Cola Company.

“The first protest happened last weekend at Carnegie Mellon University, and the Coca-Cola of Pittsburgh sent us a message asking to meet and we’re going to have a meeting sometime this week,” Kasanoff said. “It’s already starting to make some waves. Which is good; it’s exciting.”

Protester Gavriella Wolf ’15 focused on the importance of University students’ involvement in the campaign.

“It’s mostly to say that Wesleyan students are getting involved with it and feel strongly that we should protest Coca-Cola until they stop investing in Russia based on their anti-LGBT laws,” Wolf said.

Kasanoff expanded upon Wolf’s point on the University’s role in supporting LGBT rights.

“I think it would be upsetting if Wesleyan didn’t do anything about [the situation] because our reputation is [that] of a school that cares [and] is really LGBT friendly,” Kasanoff said. “And I think that this issue is more important than a lot of people realize.”

“We want to draw attention to Wesleyan’s carrying of Coke and hopefully [move] to take it off the shelves so that people can’t put money towards Coke until they say something or pull out of their investment in Russia,” Abowitz said.

According to Wolf, the boycott has been well-received on campus.

“We’re in the process of talking to people about this,” Wolf said. “A lot of different people on campus and…people in roles of power have said that they’re interested in supporting the cause. We’re just going to see where that goes.”

However, the effort has received some negative feedback as well. Several comments on the event posting on Wesleying noted that pouring soda into the city storm drainage system seems an inefficient mode of protest and questioned the decision to single out Coca-Cola from all of the Olympics sponsors.

“I am worried about where it’s going to go,” Kasanoff said. “…[T]hat’s what I’ve been trying to stress to all my classmates and everyone at Wesleyan; this is an issue which we can effect, and that we should effect. And right now is the time to do it; we can’t wait until things get really bad.”