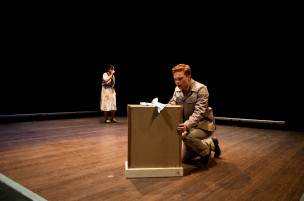 Second Stage never shies away from unorthodox productions, and “Broadcast,” showing in the ’92 Theater this weekend, is bound to continue this fantastic tradition. A period musical revolving around the invention of the radio and its impact on society, “Broadcast” aims to be in many ways a unique Wesleyan theatrical experience.

Upon speaking to Director Dylan Zwickel ’14, who is a theater major, it became very clear that this production will be far from the average musical.

“It doesn’t have big dance numbers, and it’s not your typical ‘jazz-hands’ musical,” Zwickel said. “It’s so much more meaningful.”

While nowadays the radio appears to be a topic most of us would be somewhat detached from, Zwickel revealed that it is extremely relevant to modern society.

“This show does an amazing job of presenting the pros and cons of technology and its impact on our lives,” Zwickel said. “It doesn’t just take a side. It really presents both sides and kind of leaves you to draw your own conclusions in a really exciting way, because we’re still struggling with how to implement technology into our lives. We’re all familiar with everyone sitting around a table with their iPhones, and all that started with the radio.”

While this powerful social commentary is reason enough to see the show, it is not the only major incentive. “Broadcast” was originally written in 2003 by Nathan Christensen and Scott Murphy and has only been fully produced once. While working at the powerhouse Eugene O’Neill Center over the summer, Zwickel personally met and worked with the “Broadcast” creators, who were thrilled to give her the rights to the show.

“I think it’s gonna really go places, and we’re gonna have this honor of being one of its very first production[s].” Zwickel said.

Zwickel’s relationship with the writers and their excitement for the production left the show in an advantageous position that most collegiate shows could only dream of. For example, the composer came to campus for three days to work with the actors. They produced new orchestrations, which have never been performed, and wrote a new opening number specifically for the performers’ vocal ranges.

“The writers are even coming on Saturday so they’ll be able to see first-hand how they can improve on the show,” Zwickel said.

Cast member Jacob Feder ’15 explained how he and the other actors were similarly excited for these unique opportunities.

One of the musical directors, Mary Foster ’14, expressed equal excitement for the production due to the musical nature that gives it the capacity to provide a more powerful voice to the issues at hand.

“Musicals are great in the way songs provide a way for the actors to convey their message beyond just speaking,” Foster said. “Never really done anything like it. [It’s] new territory and it’s mostly based on historical facts so it’s been fun to learn about the time period.”

Zwickel believes that although it is a historical piece, it is nonetheless important to our generation.

“Even though it’s a different time period, you’ll watch it and think that you’re living this,” she said. “Now it’s just phones rather than radios, but the issues are the same.”

Second Stage seems determined to go out this season with a bang, and one can comfortably say that “Broadcast,” the last production of the semester, is not a show to be missed.

“Broadcast” goes up in the ’92 Theater this Friday at 9 p.m. and this Saturday at 8 p.m. Tickets are available at the Usdan Box Office.