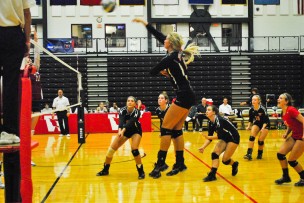 Eighteen Wesleyan student-athletes were awarded a wide variety of honors for their conquests on the field and court this past fall.

Director of Athletics and Head Coach of Football Mike Whalen was extremely happy with how the Cardinal teams fared this fall.

“The NESCAC is considered to be the most competitive conference in the country at the Division 3 level,” said Whalen. “To have so many of our fall athletes recognized as all-league is a testament to the hard work and commitment put forth by our student-athletes and coaches. All Wesleyan student-athletes strive for excellence in every phase of their lives, and to receive this type of recognition is beneficial to both them and our university.”

Leading the way in numbers was the 7-1 football team, which brought home 12 recognitions, six of which were First Team All-Conference. Defensive back Jake Bussani ’14 made the first team for the second consecutive season, racking up 27 tackles, two interceptions, two forced fumbles, a fumble recovery, and a blocked kick. Offensive lineman Jake Sheffer ’14 joined Bussani as a returner to the first team. He was a big reason that Wesleyan was able to protect the quarterback so effectively and become the league leader in rushing yards this year.

The second team was filled with players who made huge impacts for the Cardinals this season. First was linebacker Myers Beaird ’14, who had two interceptions on the year, a forced fumble, and 28 tackles. Kyle Gibson ’15 averaged over six yards per carry on the season and reached the end zone three times. Sebastian Aguirre ’14 ended his Cardinal career on a high note after setting Wesleyan records for field goals made in a season, PATs made in game and in a season, the most consecutively converted PATs, and finally, the most PATs made in a career, with 87.

Offensive lineman Pat DiMase ’15 joined the team after playing a big part in aiding pass and run protection. Tight end John Day ’15 had 10 catches for two touchdowns on the season; Devon Carrillo ’17, who averaged 25.7 yards per kickoff return, also made the Second Team.

The men’s soccer team had another successful year despite its season ending in a conference quarterfinal loss to Williams. The team consisted of three First Team All-NESCAC players: Ben Bratt ’15, Charlie Gruner ’17, and Brandon Sousa ’16. Bratt led a defense that produced eight shutouts throughout the 2013 campaign. Gruner had a spectacular freshman season, scoring two goals and tallying an assist as a midfielder. Sousa, another midfielder, had two assists and two goals, including a game-winner against Bates.

The women’s soccer team was bounced in the first round of the playoffs by eventual champion Williams. Kerry Doyle ’14 was the lone Cardinal selected to the Second Team All-NESCAC. She played in 60 out of 61 games in her four years as a Redbird and led the defense to four shutouts in her senior season.

“Making the all-conference team was a huge honor, especially as a senior,” Doyle said. “It was a really satisfying way to end my career. Going into the season, all I wanted was to finish my soccer career on a high note with a final season that I could be proud of looking back. When it ended, I personally believed that I had done that, but to have this outside confirmation meant a lot to me.”

Despite being unable to reach the playoffs, the 2013 volleyball team received some good news about its season, as Kim Farris ’14 was named to the Second Team All-NESCAC. Farris ranked third in the conference in kills and second in aces. Farris was also named to the first-team CoSIDA Capital One District II Academic All-American program commending her exceptional effort as an athlete as well as her hard work in the classroom.

“It definitely meant a lot to be named to the All-NESCAC team,” Farris said. “It really is such an honor. I couldn’t have done it without the rest of the team since volleyball is such a team sport. I can’t get a kill without someone to pass and set the ball. The NESCAC coaches vote for the all-conference teams, and it is an honor that they thought that I deserved the recognition.”

Finally, field hockey player Blair Ingraham ’14 was named to the first team All-NESCAC. Ingraham was second on the team in scoring with six goals; she also added two assists. Ingraham started all 60 games during her four-year career and racked up 16 goals and nine assists for 41 career scoring points.

“I’m very proud to have been honored by the NESCAC this season,” Ingraham said. “Playing for a great coach and with awesome teammates in a competitive league the past four years has allowed me to improve and progress as a player. It’s a great feeling to end my Wesleyan field hockey career on a high.”

After a successful season for many of the fall competitors at Wesleyan, it will now be the winter athletes’ chance to turn some heads.

“Every program in the athletic department has different goals,” Whalen said. “Most importantly, student-athletes need to be realistic with their goals and make every effort to improve throughout the season. If a team is healthy and peaking come the end of their season, they have a much better chance to advance in NESCAC and post season tournaments.”

Twelve weeks from now, the athletic department hopes to celebrate just as many team and individual honors as it did this fall.