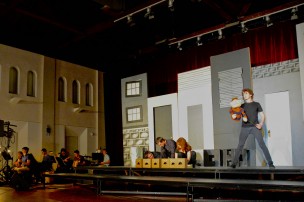 “Avenue Q” marks the third collaboration between Martin and Kayla Stoler ’14, the show’s artistic director. In the past two years, the pair has put on “The 25th Annual Putnam County Spelling Bee” and “Spring Awakening” with overwhelmingly positive reception. “Avenue Q” combines the hilarity of “Spelling Bee” with the musicality of “Spring Awakening,” creating a funny, music-oriented experience.

“Avenue Q” explores the interconnected lives of various puppets, monsters, and humans who are neighbors. The plot centers on a heartwarming love story, while quite a bit of adult humor spices things up.

This show is perhaps Martin and Stoler’s most ambitious venture yet due to the incorporation of puppetry. First, they needed to find puppets that were within their price range.

“Over the summer, I did a lot of research Googling different places that rented out Avenue Q puppets. We were balancing the quality of the puppets with the cost, and I ended up going with RoosterSocks, [a company based in Georgia],” Martin said.

To raise the nearly two thousand dollars necessary for the puppets, the pair, along with stage manager Hannah Rimm ’15, created a Wesleyan club called the Puppet Collective, whose main mission was to bring Avenue Q puppets to campus.

The trio also created an Indiegogo campaign where people could openly or anonymously donate to a fund directed toward the puppets. In four days, they raised over $1,500.

The trio had various rewards for those who donated the most.

“You could kiss a puppet or get a photo with a puppet,” Stoler said. “The biggest reward, which was our ‘Avenue Q Award,’ was [adopting] a puppet, so your name is in the program.”

Once the puppets were in the directors’ possession, they needed to teach the actors how to use them.

“It’s definitely a huge other thing to think about when doing musical theater,” Martin said. “Usually you’re a triple threat: you can act, sing, and dance. But now you also have to think about using a puppet.”

Josef Mehling ’14 stepped in as Puppet Consultant. He led a puppet workshop and worked for over three hours with the actors and the puppets in a mirror exploring how they move. Before the real puppets came, they had rehearsal puppets that the actors took home to practice with. The actors have been working with the performance puppets for the past two weeks.

The music is also an extremely important aspect of “Avenue Q.” Led by Pit Director Simon Riker ’14, who has been with Martin and Stoler since “Spelling Bee,” the pit band plays difficult scores for the length of the show. Some musicians noted that this music is even more difficult to learn than that featured in “Spring Awakening.”

Even though the puppets and music are major facets of the show’s appeal, it is the cast that brings them to life.

Cast members went through a typical musical theater audition process, but in callbacks, they were asked to use sock puppets during scenes. In addition to acting chops, the cast needed to have vocal talent and physical coordination. It was also crucial that the members worked well together.

Freshmen Max Luton and Julia Morrison, who play Princeton and Kate Monster, respectively, lead the show with gusto and strength. They are onstage for nearly the entire show and sing for just as long, which is undoubtedly a difficult feat. They have magnificent chemistry and stage presence as well.

Simone Hyman ’15 and Solomon Billinkoff ’14 are memorable as the Bad Idea Bears, which function as the angel and devil within one’s conscience. Naturally, there is an inappropriate twist.

Billinkoff also plays Nicky, whose relationship with his roommate Rod, played by Johnny LaZebnik ’16, resembles that of an old married couple and is the grounding subplot of the show.

Dan Storfer ’15 plays Trekkie Monster with a voice so deep and grumbling one questions how he can produce it. Katie Solomon ’15 performs a rendition of “Special” as Lucy the Slut that is soulful and attention-grabbing.

Dominique Moore ’14 keeps all of the cast members in order as Gary Coleman, and Will Stewart ’17 and Zoe Lo ’15 are a hysterical, if unlikely, couple determining what to do with their lives.

Stoler’s set is magnificent; it is the façade of the buildings on Avenue Q with windows and doors that serve as the perfect backdrop for the action. She also choreographed many of the dance moves, which were clearly difficult to manage with puppets and actors. Some actors noted that moving the puppet one way while moving their own different body part another way was at first nearly impossible. Through her own motions, Stoler helped them coordinate their movements with ease.

The cast mates simply love one another and their directors.

“They’re all just such funny people, and even during rehearsals every moment is goofy and crazy and just so much fun,” LaZebnik said.

Morrison agreed with the sentiment.

“I really like that everyone is just excited to play all the time; everyone wants to just get onstage and do their thing, and no one has any hesitations,” he said. “It’s all about having fun.”

“Avenue Q” marks the final collaboration between Stoler and Martin, who feel that this show is bittersweet.

“I never anticipated being involved in theater at Wesleyan, and I got to use a lot of the skills I didn’t think I would be able to use in college,” said Stoler. “Also, I got to meet a lot of people I don’t think I would have interacted with if I hadn’t been in these shows.”

Martin is thankful for all of the support the show has received from the Wesleyan community throughout her theater career.

“It’s such an awesome thing to be able to create such a huge project with so many people,” Martin said. “There are so many people that are involved in different ways, and so many people wanted to get involved. It’s so gratifying to see all these people coming together to create this big project together.”