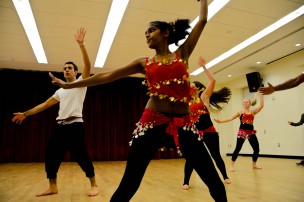 There is no doubt that the University is home to members of a multitude of different ethnicities and backgrounds that help define its culture, and that for many students, an integral part of the Wesleyan experience is sharing and learning from differences within the student body. Just as the African Students Association did last week with its annual festival Ariya, the student group Shakti will host Samsara this Thursday.

A group especially for students who identify as culturally, ethnically, or nationally Indian, Pakistani, Bangladeshi, Nepali, or Sri Lankan, Shakti is the main vessel on campus for South Asian cultural expression.

“Our efforts are to provide a space for people who either identify as a South Asian, a South Asian American, or who are passionate about that culture, education, politics, everything,” said Shakti President Anika Amin ’14. “I also try to have it be a place where you come to the meeting and can explain an aspect of the culture that you like and want to explore a bit more and express.”

In response to these goals, Shakti members of the past created the annual Samsara festival. Shakti, in collaboration with many students with an understanding of and a passion for any aspect of South Asian culture, provides the University community with a glimpse into the perspectives of both natives and migrants within the region.

“The two big missions of Shakti are to provide that space to those who identify with or are passionate about the culture and to spread awareness about the culture to the Wesleyan campus as a whole, and that is what Samsara as [a] campus wide event do[es],” Amin said.

A concept in Hindu spirituality, the word Samsara represents the cycle of life, death, and rebirth that is key to the faith. Given the diversity of religiosity in the region, Hinduism does not play a central part in the actual event, but Samsara continues to be the event’s title for the way in which it acts as a metaphor for human transcendence and, of course, due to the annual nature of the event.

While breaking stereotypes, especially crude ones, is a crucial goal of the festival, it is equally important for it to illuminate the relationship between East and West. This leads to comical portrayals of said stereotypes in a fashion that, on the one hand, pokes fun at them, and on the other, contrasts them with reality.

“Samsara is our chance as a group to show Wesleyan [that] this culture not only exists, but it exists on this campus,” Amin said. “You may have learned it like this, but this is how it has evolved, this is how this generation is interpreting it [and] how we’re expressing it. This is how the two cultures fuse.”

Shakti is structured as a fragmented musical consisting of numerous performances with partially improvised sketches in between. The story usually has some sort of theme regarding an encountering of East and West. For example, two years ago the subtitle of the event was “From Middletown to Mumbai,” taking the audience through the story of a Wesleyan student studying abroad in India as he comes across numerous Bollywood clichés. For instance, he falls for a girl whose parents had already arranged a marriage for her.

Last year’s performance reversed this tale, as it showed an Indian student coming to Wesleyan and struggling with the way in which he understands and resonates with his own culture, especially when he falls for a member of Shakti. This year’s story shows a film producer who goes to India in search of the next big Indian-themed project, encountering on the way Indian parodies of American TV shows, such as a show titled “How I Met Your Auntie.”

“[For] people who aren’t familiar with the culture, I can only hope that they come with open minds,” Amin said regarding those who have never attended the festival. “South Asian culture has come to invade American culture. You have ‘The Mindy Project,’ you have ‘Slumdog Millionaire’ that won the Oscar. I want them to leave knowing that it not only exists on campus, but it is something that is not separate from their lives.”

Samsara is set to be a night laden with festivity, laughter, and, most importantly, an opportunity to experience song, dance, and spoken word of another culture.

The Samsara Festival will take place this Thursday at 8 p.m. in Crowell Concert Hall. Tickets are on sale at the Box Office.