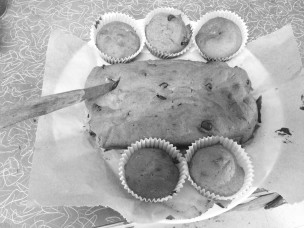 I’ve made the case before that fall is the best season for cooking. The smells, the coziness, and the general happiness that comes with the leaves changing make for a great excuse to bake.

I realize that fall is waning, and winter is coming. So I’ve been trying to make the most of this recipe for pumpkin bread. I actually forgot about it until this weekend, when I decided I needed more pumpkin in my life. This recipe is one of my favorites from childhood and comes from a 1983 L.A. Times cookbook. My mom would make it exactly once every year (despite my pleading her to make it more often), and I would generally try to devour as much of it as possible. She would alternate between making it in bread and muffin forms and would usually add chocolate chips.

As to my own history with this recipe, it’s one of the first I have a distinct memory of messing up so badly that I had to throw it out. The recipe is old and is not very well detailed in its original form (baking soda is simply “soda,” and vegetable oil is just “oil”). When I was just starting my relationship with baking, I made an assumption that “oil” meant olive oil until my mom laughed at me and told me that I needed to throw it out and start over.

According to the book from which this is adapted, this recipe is from the Monastery of the Angels in Hollywood. The Internet—and the NPR special, which also features the recipe—tells me that the Monastery’s costs are largely covered by sales of this pumpkin bread. They’re famous for the bread and now sell it for $9 per loaf.

This recipe should yield one loaf and about six muffins (if you’re into having the best of both worlds). The quantities are halved from the original recipe because I figured nobody would need three loaves of pumpkin bread. (I was wrong to apply this to myself as well; I ended up having to making it two days in a row.)

(Adapted from Monastery of the Angels)

3. In a separate mixing bowl, beat together eggs, oil, water, and pumpkin.

5. Bake for 10 minutes, until toothpick comes out clean. Bake bread for about 30 minutes.