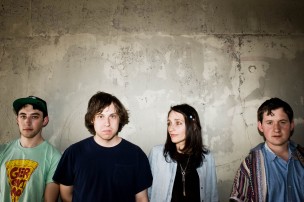 It’s easy to fall into the retro trap. Hey, wouldn’t it be great if more bands sounded like Dinosaur Jr.? There’s nothing wrong with throwbacks; a world without the likes of Yuck and the Smith Westerns would be a very sorry place. But there is nothing more satisfying than a band that pays homage to its influences while still being more than the sum of them, and Speedy Ortiz is one such band.

Imagine the hooks of the Breeders plus the frank, occasionally and deliciously vulgar lyrics of Liz Phair, all delivered with an off-beat yet authoritative flair that’s all Speedy Ortiz’s own. Songwriter and guitarist Sadie Dupuis sings with an ever-present smirk, guitarist Matt Robidoux brings the big riffs, and bassist Darl Ferm ’12 and drummer Mike Falcone keep everyone perfectly tight. Their debut album, Major Arcana, is a study in contrasts: big fun in the classic rock style yet dripping with menace, noise-rock braggadocio tempered by sensitive, finely observed lyrics.

And so far, Speedy Ortiz is the prototypical indie rock success story. The band’s energetic live shows and extensive touring have won over crowds, while critics and bloggers have lost their collective minds. But best of all? They’re playing at Eclectic this Friday. Singer Sadie Dupuis took the time to answer some questions via email and talk about songwriting, music journalism, and why getting a little wet makes for a way better concert.

The Argus: How did you form the band? How did Wes alum Darl Ferm get involved?

Sadie Dupuis: Speedy Ortiz started as my solo home recording side project. Eventually I wanted to do shows with it, and started playing some with Mike on drums, and then also with Matt on guitar. We didn’t have a bassist, so we had some friends sub in for two or three shows (Sam Rosenberg from Two Inch Astronaut was one of them). They were pretty loose shows, and we were all sort of treating it as a side-project, an excuse to play music and drink some beers together. But after about a month we realized that the chemistry was good enough between us to pursue taking the project more seriously, at which point we needed a real bassist.

And that’s where Darl came in—I was a big fan of his old band Day Sleeper and we liked a lot of bands in common, and it made sense to play together in some capacity. I think he was just planning on filling in for one show at Great Scott, but he learned all of the songs really quickly and did a great job, and so it made sense to have him join too. I don’t think we considered the band a fully realized project until Darl joined anyway. Not that it’s fully realized at this point. But right after he came on board we recorded a single and an EP and started booking shows and tours constantly. A lot of our early rehearsals were at Darl’s old house at Wesleyan, actually.

A: Can you talk about the songwriting process? Do you write the songs alone, or is it collaborative? And how do the lyrics fit in? They can feel like an afterthought on many albums, but the lyrics on Major Arcana seem really vital.

SD: I write the songs at home and make demos of them, usually with a few guitar parts and bass and a drum loop. The lyrics go in then too, but sometimes I change them later. I guess I consider the lyrics secondary to the melodic stuff, but I try not to write anything pointless or lazy or trite. We don’t typically get around to learning the songs together until a few months later, at which point I’ve already forgotten how they go and so have to re-learn them along with my bandmates. That in-rehearsal arrangement period is probably when the songs are most collaboratively developed; the structures can change narrowly or broadly depending on how we learn and hear them all together.

A: In doing research I learned that you interned at Spin and considered a career in journalism. Most of the musicians I know don’t generally have the highest opinion of critics. Since you have an unusual amount of experience in both writing and music, how do you feel about writing about music? Is it really like dancing about architecture?

SD: I love reading arts and cultural criticism, and I’ve never really understood some of my musician friends’ contentious relationships with music critics. I found out about so many of the bands I love from obsessively reading magazines as a kid, so it seems pointless to express reproach over a system that basically introduced me to my own taste. I don’t think a writer is an asshole for panning a band (even if it’s my band), nor do I think it’s worth getting mega-hard over a positive review from a major publication. I like music journalism, whether it’s acerbic or glowing, because when it’s done well it fosters conversation on the larger cultural importance (or lack of importance) of the stuff we’re listening to all of the time anyway. Even if I disagree with a writer, it forces me to establish my own opinion.

I really didn’t expect to be in a band that had any kind of blog-buzzy-semi-success, especially not when I was writing at Spin. I’ve mostly ditched music journalism for the time being, other than the occasional freelance piece, partially because I switched my writing focus to poetry and am finishing up a master’s thesis of poems. So it doesn’t feel like too much of a conflict of interest at present to wear the two hats of writer and musician. But I still read a lot of interviews and essays and reviews, and maybe when I’m not busy with making music myself I’ll get back to writing about it.

A: I’ve been reading your LiveJournal tour journal. You describe so many of the classic touring scenes that I think any kid who’s ever wanted to take their band on the road has daydreamed about—building relationships with other bands, run-ins with menacing locals, etc. How do you think touring’s changed your band dynamic? Has it affected the music?

SD: The Livejournal is all Mike [Falcone]. He’s the Livejournal champion. We love touring and meeting other bands, and certainly I think our music is affected by it because after spending time in other scenes and hearing what they’re engaged in, we wind up bringing some of those ethics and aesthetics back home. Our two favorites right now, other than our local scenes, are Kalamazoo, MI, and Hamilton, ON. Best places, best bands, best people.

A: How do you feel about playing college gigs? Are the audiences different? How does it compare to your traditional venue bookings or DIY shows?

SD: Sometimes college shows can be a little stiff, for sure, but sometimes they can be great. We played a show at Vassar a few weeks ago with Low Fat Getting High, and towards the end of their set, smoke alarms set off by a fog machine resulted in everyone getting cleared out into the rain. One guy was wearing a Cap’n Jazz shirt that became scandalously see-through after he got downpoured upon. By the time the fire department let everyone back in for the show to continue, kids were totally rain drenched and somehow even more enthusiastic about moshin’ around. Shit was like a slip ’n slide in there. That show was cool and everyone was totally supportive. It was probably closer to the DIY show attitude that we favor over more straitlaced venues. We’ve always had fun at Wesleyan, though, and we played Darl’s old house a bunch. So we’re looking forward to Eclectic.

Speedy Ortiz will be at Eclectic this Friday at 10 p.m.