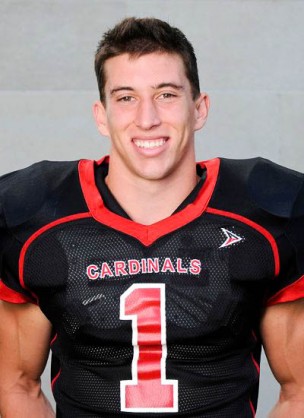 Bear Bryant, the renowned University of Alabama football coach, once said, “Offense sells tickets. Defense wins championships.” This statement could not be more relevant for the 2013 Wesleyan football team, as it has given up only 50 points throughout the first six games of the season.

Credit must go to Captain Jake Bussani ’14 for leading that unit. Playing defensive back, he has recorded 1 interception, 1 forced fumble and recovery, and 17 tackles through 6 games. Bussani sat down with The Argus to talk about his team’s results so far this season, and how he thinks the players will be able to continue their outstanding play on the field.

The Argus: On the opening drive of the first game of the season, Tufts drove down the Wesleyan field for a 7-0 lead. What was said in the defensive huddle after that score, and how has it lead to an almost impenetrable group since?

Jake Bussani: After Tufts scored on their first drive, [Associate Head Coach and Defensive Coordinator Dan DiCenzo] told us not to panic and that it’s going to happen. They were running plays that we hadn’t really game-planned for, and he said that if we just did our job, we would be fine. The rest took care of itself, as the defense didn’t give up any points for the remainder of the game.

A: Despite the team expecting to play at the level they currently are, many of the other NESCAC teams did not anticipate you guys being undefeated at this point in the season. What has surprised you most about this season?

JB: I would say the team chemistry hasn’t so much surprised me, but I’ve been really happy with what we’ve been doing this year. We’re all real close on both sides of the ball. The other teams may not respect us, but they still have to prepare for us or they’re going to get beat pretty bad. We’ve been planning for every game like it’s a big one and haven’t overlooked any teams.

A: How has being a captain on the team this year changed your perception of how you practice and prepare for games?

JB: I’m definitely not one of the more talkative captains on the team, so that means that I really have to lead by example. I am certainly more conscious of everything I do during practice, whether I’m cheering [for] my teammates, going hard during every play, or making sure that I’m taking care of my job. If any of the other guys ask for advice, I always try to be there for them.

A: Beating Amherst on the road is no small feat, as Wesleyan has not accomplished this since 1993. In practice, how did the defense prepare to stop the triple-option offense, as well as thwart the dual-threat quarterback system?

JB: The way that we play our defense, everyone has a job to do. If everyone takes care of their assignment, we won’t have any openings. The thing about football that makes it so great is that if one person doesn’t do their job, a big play is bound to happen. This forces us all to act as one, cohesive unit in order to stop the triple option, which involves the quarterback, running back, and pitch man. Against Amherst, we were able to limit them from seaming multiple big plays together, and, in the end, we only let up fourteen points.

A: Wesleyan has a brick-wall defense, but at the end of the day, points are what you need to win games. The turnover battle is always key in football, and while the defense has been a beast at creating turnovers, the offense has yet to throw an interception. In your opinion, how has the offense evolved throughout the season?

JB: The offense has been great this season. For example, we’ve dominated the time of possession, which keeps the defense off the field and rested. When the defense comes out, we are able to give 100 percent, thanks to the break. The offense not committing turnovers really helps us because we don’t have to play anymore than we should. It has been a nice help having the offense bail us out a couple of times this year.

A: How has the chemistry in the defensive secondary improved throughout the season with first-year players Devon Carrillo, Justin Sanchez, and Reid Andrew making an enormous impact?

JB: The three freshmen are big-time players who make huge plays in important spots. They’re real nice kids who work hard, and it’s nice to joke around with them. We’re a really close-knit group, and tomorrow we’re all going to get mohawks together as a team for the Williams game.

A: The Ephs’ quarterback, Adam Marske, has thrown more interceptions than touchdowns this season. How does the defense go about making him feel uncomfortable and forcing him to make bad decisions?

JB: Forcing him to make bad decisions just means that we have to have constant pressure on him and make sure that he doesn’t have any time in the pocket. As long as we do our jobs and cover our zones, he has shown that he can’t make these throws consistently.

A: No matter what the records of Wesleyan and Williams are going into the game, both teams know that there will always be a dogfight on the field. Has the intensity at practice been any different this week and what do you think will be the key to coming out with a victory on Saturday?

JB: The intensity at practice hasn’t been different. We know that the stakes are higher for this game because we are playing for a conference title, but we’re telling ourselves just to do what we’ve been doing these past six weeks because we are 6-0, and you can’t get any better than that. This week just needs to be another one of those weeks where we practice well and show up on Saturday to play. If we do our jobs and force them to make the mistakes, we should come out on top.

A: What would it mean to you and the team if you were to win the Little Three championship outright, an accomplishment that has not been achieved since 1970?

JB: It would be a great thing for our team to accomplish because we weren’t here when it last happened in 1970. We are here now though, and all we can do is play our hardest. We’ve been working towards this moment for the past three years, and now that we’re here, we don’t want to squander the opportunity.

A: How does the team focus on Williams, who has an average record, when the team has a game against Trinity the week after with a chance for a coveted NESCAC championship?

JB: We focus on Williams because they’ve been shooting themselves in the foot this year. They’re a capable team; they just haven’t been making the plays necessary to win. Anytime you play a Little Three team, both squads are going to have to show up to win. These next two weeks are playoff games for us. Yes, we want to beat Trinity, but we have to get this week down first. This week is for the Little Three title and for the opportunity to play for a NESCAC title next week. This game is as big as any in the past or future.

A: After the season is complete, how do you want the 2013 team to be remembered?

JB: Our senior class wants to finish this season strong for Coach Whalen. Whalen started his Wesleyan career here knowing that we were going to be the seniors who would lead the three younger classes to success. We know that he has brought in a lot of good players, and if you aren’t in a playing role, you still need to be a leader and a hard worker. I want to be remembered as Whalen’s original class because we started this journey together four years ago, and now it’s time to cap it off with what we’ve been working for.