Getting Into Costume: The Argus Explores The Wesleyan Costume Shop 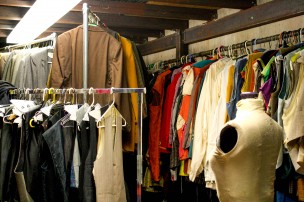 Large cutouts of unidentifiable creatures, spray-painted with metallic paint, adorn the walls. File cabinets brimming with period jewelry can be found upstairs near a desk covered with mini action figures. Posters from virtually every decade hang everywhere. A stray blond wig sits atop an ancient sewing machine, and a life-size puppet of a small child grins at visitors as they enter.

Welcome to the Wesleyan Costume Shop.

The Costume Shop, located in the basement of the Center for the Arts (CFA) dance and theater studios building, has been in existence for over 25 years, but it was only 11 years ago that Costume Shop Manager Christian Milik took over and revitalized the space. Having made costumes for his own shows in high school and having eventually studied theater arts with a concentration in costume design at Brandeis University, Milik came to Wesleyan with ample talent and ideas.

The shop is home to thousands of costumes—pants, dresses, skirts, hats, shoes, jewelry, and the like—from various periods of history. Some of the pieces are as old as the eras they represent.

In one room, the costumes are organized by fashion history by decade. On the left, women’s floor-length, turn-of-the-century dresses come first, in polka dots and purple hues, interspersed with more drab designs in ecru and white. From there, the collection slowly morphs, eventually merging into the more psychedelic fabrics and prints that define the 1970s. The other side of the room is full of vests: leather, denim, tweed, and more in outrageous patterns and designs. Other rooms in the shop are organized according to garment type, with skirts and pants placed in their own sections.

“Costumes are purchased online and locally, and we also get donations from alumni and local folk,” Milik said.

Milik and his student employees often create a great deal of the costumes themselves, made to order for Dance Department and Second Stage shows. He buys fabric from local stores and from a particularly large fabric outlet in Springfield, Mass. Occasionally, employees buy fabric online as well.

In addition to making costumes from scratch for particular shows, the Costume Shop has a lending policy for the costumes they already posses. Students make appointments with staff members and explain their visions for the costume they are looking for. The staff member then pulls out options, and the students can choose which they like best. They then “rent” them out for two weeks through a newly installed online checkout system, which was conceived by Jessica Jordan ’13. Costume borrowers are expected to have the clothes dry cleaned or washed accordingly prior to returning them.

Unfortunately, students hoping to find and borrow particularly elaborate Halloween costumes will be turned away; only theater, dance, or thesis film rental requests are granted.

The Costume Shop employees are students with a particular interest in costume design or theater production more generally.

Sisam Acharya ’16, a new employee, has enjoyed her work in the shop thus far.

“I used to sew and I love working with costumes,” she said. “I’m really into clothing history and fashion design. It’s a really great place to work because our boss is really nice and funny, and it’s just fun work.”

The student staff does everything from creating puppets and masks to fixing hems and designing costumes.

Emma MacLean ’14, a longtime Shop employee, remembers some funny instances that have become staple stories in the shop. Each of the five sewing machines that Milik inherited when he arrived at Wesleyan bears its own name. Once, a student dropped one of them on the ground, picked it back up, attempted to sew with it, and, miraculously, it worked perfectly. To honor her good fortune, Milik named the sewing machine after her.

Another fond memory materialized last spring, when the shop employees crafted nearly 20 Chinese robes out of satin for the Theater Department’s production of “Peony Pavilion.” Thanks to a child puppet that she had helped create earlier in the year, MacLean also managed to scare a Public Safety officer late one night when he was locking up the shop.

Though Milik and his staff have created some awe-inspiring costumes, he is most proud of some of the puppets they have created over the past few years. Two springs ago, for the Theater Department’s production of “Doctor Faustus,” the shop employees created a lifelike dog and the aforementioned child puppet, both of which are now on display in the shop. Milik also spearheaded the creation of the puppets for “The Master Peter Puppet Show,” which is a puppet show within a puppet show. That collection eventually went on display at the Kennedy Center in Washington, D.C. A dismembered Don Quixote puppet from the show is on display in the men’s restroom in the CFA theater and dance building.

Milik is also fond of the costumes created two years ago for “The Skriker,” a play by Caryl Churchill. The fabric for all of the costumes and puppets he created was recycled from donated materials.

Another product that Milik created himself is a vacuform, a machine used to create masks by pushing plastic down to a mold of a face in order to create a mask specifically for that person. Milik mastered this particularly difficult process with ease.

Milik works closely with Theater Department Artist in Residence Leslie Weinberg, who conceives and creates the costumes for all department shows.

“We have developed a relationship in which she takes advantage of my skills in her designs, which has lead to much more elaborate construction,” Milik said.

The shop’s inventory has grown immensely since Milik has taken over, so much so that the employees purge the shop every few years to make room for new garments. They now have twelve types of sewing machines instead of five to accommodate the growth of the Theater Department and the higher demand for garments.

If you’re in need of a purple satin gown or a fur vest for an upcoming show, there’s one stop you should definitely make before heading over to Goodwill.