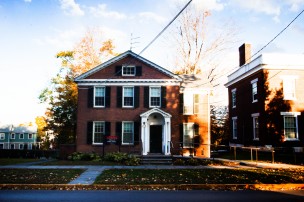 Three finalists for the Director of Public Safety position visited campus in September, and one was selected. However, the finalist on whom the search committee decided was not able to accept the position. The committee is reviewing new candidates and remains hopeful that the position will be filled by the end of the semester.

“When the search committee got together and reviewed the feedback from all the various people that the candidates met with when they were here, it became clear to us that there was one clear choice,” said Vice President for Student Affairs Michael Whaley. “He had been kind of a favorite of the search committee from the start anyway, so it was great to have affirmation from more members of the community. We decided to make the offer to that person, and we extended the offer, and then that person subsequently withdrew, unfortunately, for personal reasons.”

“It means I will be serving in this capacity a little longer,” Bostick said. “It’s something that I knew, when I took the position, I would serve as long as necessary.”

The three candidates who previously visited campus were selected from a pool of 160 applicants developed by a consultant from The Spelman and Johnson Group, which works to fill positions in higher education. The search committee will now return to this larger group in searching for new finalists.

“We had talked at that original meeting about the other finalists and had decided that if the one person who was the clear choice didn’t work out, that we would want to go back and look for additional candidates,” Whaley said. “We’ve gone back to that pool.”

Additionally, the search consultant has identified several additional candidates who were not in the original group up for consideration.

“It’s not clear to me if they applied in the initial group or if they applied after we started our review,” Whaley sad. “But be that as it may, we identified five folks that we were interested in talking with, and two of those were no longer available.”

The search committee held interviews via Skype with the remaining three of those five candidates on Oct. 17 and 18. If the committee is interested in pursuing any of the interviewees further, it will bring them to campus this semester. Whaley noted that the committee will follow the same format that it did when bringing the original three finalists to campus: each will meet with the search committee and hold a forum open to the University community.

“We expect that these people will be good, but you never know going into a conversation if somebody’s going to be somebody that you want to bring as a finalist to campus,” Whaley said. “If there are people, we’d try to get those folks in as soon as possible and still try to get the position filled by the end of the semester.”

If the search committee is not enthusiastic about any of the candidates it interviews, it will work with the search consultant to repost the position and develop a new pool of applicants.

“We have our fingers crossed,” Whaley said. “We were all really disappointed when the first person to whom we offered the job didn’t work out, but we’re going to keep working until we do it right.”