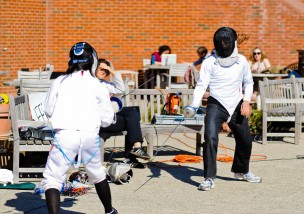 When Sarah Lerman-Sinkoff ’14 was accepted to Wesleyan, she hoped to join W’Escrime, the fencing club, right away. She contacted the club’s leaders, Jen Paykin ’12 and Joel Salda ’11, who both responded with enthusiasm. After taking a gap year, however, she returned to find no trace of the club’s existence.

Lerman-Sinkoff contacted the juniors and seniors who had been running the club. They offered to lend her the equipment to start up W’Escrime again.

Though Lerman-Sinkoff cannot take credit for the club’s clever name (“escrime” is the French term for fencing, and Salda added the essential “W”), she can account for the acceleration and growing appreciation for the club over the last three years.

“The first year I ran it, it was just one day a week; the second year, two days a week; and last year we started conditioning on a third day,” Lerman-Sinkoff said.

Adele Bubnys ’14, a four-year club member, and Lerman-Sinkoff both noted that the current freshmen are experiencing the fullest version of the club since its rebirth. The club has its own practice space and at least 15 regular members. In previous years, the fencers practiced in diverse locations including Exley, the Hewitt lounge, Beckham Hall, the Fayerweather dance studios, and outdoor spaces. The club has had as few as five members at a time.

The traditional practice lasts about two hours, beginning with drills and footwork. The second half of practice consists of bouts in round-robin style to ensure that the fencers have some practice prior to arriving at tournaments.

Currently, the team practices in the Bacon Field House. However, it is occasionally removed during the winter to make room for varsity sports teams, relegating W’Escrime to less desirable areas.

Fencers use three different weapons: saber, foil, and épée, all of which require decidedly different techniques. Initially, the club only taught members to use sabres, but as it has grown in popularity, it has expanded its range of weaponry. When new students with little fencing experience join, the older, more seasoned veterans teach them the proper techniques.

Adam McGill ’16, the club’s current captain, is an expert épée and foil fencer, and he teaches newcomers to use both of these weapons. Lerman-Sinkoff teaches sabre, her weapon of choice. Alex Woo ’14 helps out with foil. The student-teaching process has been refined over the past few years as the fencers have become more accustomed to the sport as a group effort. The student teachers hope to emphasize different aspects of the sport to produce a well-rounded education for newcomers.

“My overall goal in teaching footwork and bladework is that there will be a moment where the drills and exercises that we do in practice start to transition into the fencing itself,” McGill wrote in an email to The Argus. “I want fencers to be comfortable enough with certain types of attacks and defenses that they simply become a second nature in a bout.”

In the past two years, the club members invested in a coach to aid their foil technique instruction, but this year the members decided their money would be better spent on tournaments and equipment.

The club is also directing its funds toward purchasing equipment for future generations of University fencers rather than continuing to rent it. Lerman-Sinkoff, who will graduate in the spring, said this will help ensure that the club still maintains a presence on campus after she leaves.

The club’s endurance, in fact, is a point of pride among its members. Last year, the team posed for a reenactment of a photo Lerman-Sinkoff found of the 1940 fencing club in the Freeman Athletic Center, with all of its male members sporting identical, ridiculous mustaches. The modern day version is now located on the W’Escrime blog, which, run by Camille Casareno ’15, documents practices and tournaments.

The team is also creating new, silly traditions off the fencing strip. When Salda graduated, he left behind 15 orange cones. Since then, the team members have awarded them to graduating seniors over the past few years, decorating them with inside jokes and memories from their time in the club. The group also has regular board game nights for its members to create a closer-knit community.

W’Escrime is not a purely recreational club, though. Occasionally, members of W’Escrime compete against each other just for fun, which helps them gain more experience in bouts. They have participated in a variety of tournaments over the past four years.

“We generally compete against other clubs, so it’s not as competitive as a varsity sport,” Bubnys said. “We’ve done some stuff with the Five Colleges, and we’ve gone off to Hampshire College to have ‘friendly’ tournaments, so it’s pretty casual. But we do compete to some extent.”

W’Escrime has also hosted some tournaments in the past few years, and hopes to continue to pursue that endeavor in the future. In the upcoming months, the team will compete at “The Big One,” a tournament hosted by Smith College in which nearly one thousand fencers are expected to participate.

Because the fencing uniform is a standard white jacket and knickers for all fencers, the club members have found it difficult to show school spirit through their dress code. However, W’Escrime is planning to purchase Wesleyan-themed fencing socks for all competitors to demonstrate Cardinal pride and unity.

W’Escrime is perhaps best known for its famous grilled cheese delivery fundraiser, which was conceived by Lerman-Sinkoff during her sophomore year. On Sunday evening, Oct. 12, the team camped out in the Hewitt kitchen and prepared grilled cheese sandwiches for anyone who called the group’s Google Voice account. The fencers then delivered the sandwiches to their clients. In past years, the fundraiser has raised between two hundred and three hundred dollars, which in 2012 was enough to allow the team to purchase its own scoring machine. This year however, the team, having sold almost two hundred sandwiches, racked up nearly six hundred dollars, the most successful profit it has ever accumulated.

Although the club will lose some seniors in the spring who have been vital to its revival and continued existence, the current freshmen are enthusiastic about and well versed in fencing. They feel ready to carry on W’Escrime’s legacy.

Lerman-Sinkoff echoed Mischell’s sentiment, noting that W’Escrime provides a non-competitive and warm environment for fencers looking to find a source of community on campus.

“It’s always just been a group of really nice people, [and] the emphasis has always been on teaching each other and having a good time,” she said.