“Shaking the Dust:” Anis Mojgani Returns to Campus With Poems And Love 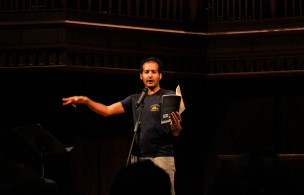 “Hey. How are you?” Anis Mojgani, the two-time National Poetry Slam champion, asked the packed audience at the Memorial Chapel this past Friday, greeting his audience as old friends. Ranging from evocative and probing to funny and sentimental, Mojgani’s poems kept the audience enraptured and emotive. During moments of seriousness, the room fell entirely still and silent, and after comedic lines, the participants roared with laughter. After the event, hosted by WeSLAM, Mojgani sat down with The Argus to reflect on his beginnings in poetry and why he chooses to write.

The Argus: What brings you back to Wesleyan?

Anis Mojgani: When we performed three years ago, I just had a really, really good time. It’s a beautiful space. I love this part of the country; I love New England, so I was just excited to get to be in New England at a lovely time of year. I didn’t remember this until I was onstage: I remember last time we were here, the present-ness of the audience, the intelligence of the audience because different audiences have different strengths. It is nice when you do a show at a school where you can just sort of feel a presence of people being there for you, you know, certain lines that maybe in other arenas don’t sink in. And vice versa, but that’s something that I remember. Just folks being present; that’s always nice.

A: What made you start writing poetry?

AM: The initial reason was I took a creative writing class my last year of high school, and I really enjoyed making poems. That was really it. Then, in the year or two that followed I just found myself more and more attracted to doing it and wanted to keep on working at it. And that was it.

A: Who are your influences?

AM: There’s been a range over the years. When I was younger, I was very much inspired and influenced by a number of the writers of the Beat generation, such as Jack Kerouac and Gregory Corso, [and] Allen Ginsberg. And then I found a lot of inspiration from works of [Richard] Brautigan and Charles Bukowski. And in subsequent years, folks like…Frank Stanford, Jack Gilbert, Anne Sexton, Sharon Olds. Recently, Lucy O’Clifton really turned my head around.

A: Do you have a poem that you are most proud of?

AM: I don’t know one that I’m most, most proud of, but there are some of my poems that I like maybe a little bit more than other ones. Maybe a poem named “Four Stars,” I really like [that one]. The poem that I did earlier tonight, “My Library of Seventeen Books,” I like that poem, as well as that short one about the lemon tree. 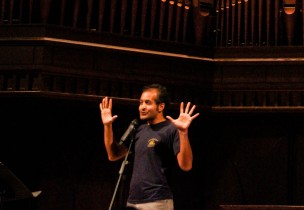 A: Did you always write performance-based poetry?

AM: I approach it from having a foundation of writing. I know there are others folks that approach it differently that perform, but for me, it’s always been writing first, and some of the poems I just want to share out loud, more so than, say, other ones. There’s definitely some poems that are built more for that. And when I was younger and first finding spoken word, a number of those poems, I think, were definitely built more…for that, with that in mind, even if they weren’t written specifically for the stage. These days it’s just [that] I write a poem, and sometimes it’s something that I think will work on stage, and I’m excited to share onstage.

A: Why do you think it’s important to share your work with college students?

AM: I think that for me one of the important aspects of making art is [that] art is something that inherently should be shared with other humans. That’s what gives it its power. Because it’s through art, I feel, that we make sense of what it means to be a person, and we are able to hopefully share that revealing, those answers, with other people…. It’s not necessarily so much that I write a poem and in that poem I figured out an answer to a question that all of us have, but that in simply sharing whatever it is I have experienced, I have opened up to other people. Writing is individuals trying to make sense of things inside of them. It has made me a stronger writer when people connect with it, and I can reflect on what works better.

A: What was it like at the National Poetry Slam?

AM: You compete with ten folks over the course of a few days. At that time, let’s say 300 folks…were competing, [and] the top ten people would end up in the finals. And you have a night with that. I’ve always found inspiration at the National Poetry Slam, but though it is a competition, it’s also an opportunity to see friends of one’s that one doesn’t always get to see. It feels a lot more like a family reunion, but it’s a family reunion where your family members are your friends [and] are these incredible folks that are sharing incredible work, [and] you find that they do for you what you hope your art might do for somebody else. You know, you’re just as affected and touched by whatever random that might be onstage.

A: Why do you write?

AM: A lot of it, that’s maybe not necessarily the tangible reason that I write, but a big part of it is that from exploring what’s in my head and my heart, it helps me to make sense of things that might be fuzzy.

A: What advice would you give to someone just starting out opening him or herself to the world?

AM: I would say, just across the board—not even from a writing perspective—[that] someone who’s opening [him]self up to the world is likely to allow for that to happen. You know, it can be sometimes a scary thing, but as scary as it becomes it makes one stronger and one learns more of who oneself is, and the more you can know about yourself, I think like the more you can fully experience the things that come before you. It’s all right to be fearful of that exploration because it’s exciting to find those discoveries of what the world holds for you.