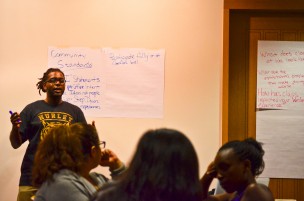 Students gathered in the Daniel Family Commons on Friday, Oct. 11 for the first session of a new, five-part discussion series titled “Privilege and Policy at Wesleyan.” The first forum focused on the implications of class and socioeconomic backgrounds on campus. The series was organized by Wesleyan Student Assembly (WSA) President Nicole Updegrove ’14, but has no affiliation with the WSA.

Updegrove described a perceived lack of conversation between students about such issues as class; ability and wellness; race; culture, ethnicity, and religion; and sex, gender, and relationships. These are the topics around which the series is organized.

“Last year I had the idea of doing all-campus priority meetings: getting a bunch of students in a room together with a group [of] leaders to participate in groups and talk about what the real issues on campus are,” Updegrove said. “It occurred to me that there might be some big themes [relating to] problems at Wesleyan.”

Kwame Adams ’14 and Leonid Liu ’14 led the first forum. Both students have previously been involved with diversity and inclusion events on campus. Updegrove described the selection process for discussion leaders.

“I asked around with the deans…as well as my friends who are involved in diversity and inclusion and asked them who they thought had a lot of connections in different groups on campus and also knew how to facilitate a conversation and make sure that we could maintain stability and respect for each other,” Updegrove said. “Leo and Kwame were both mentioned by numerous people and fortunately they were very generous with their time.”

The first forum drew around 45 students and lasted for over two hours. The discussion was held in one large group until about halfway through, when attendees split into smaller groups of about 15. At the end of the discussion, Adams and Liu listened to ideas for future action from students and asked them to sign up for a Google Group if they were interested in being involved in a potential student group.

“I was really happy with the first session,” Updegrove said. “We had a great turnout…and [attendees] were all really positive and supportive of each other and really honest about the things that are going on on this campus. We generated a lot of ideas about what the problems are and also a good amount of solutions.”

The presenters were satisfied with the first forum, and Adams described his hope for the lasting impacts of the meeting.

“I hope that people will leave here and continue this conversation, so it reaches ears that weren’t in the room tonight,” Adams said. “That’s important because often we have these events and everyone who identifies with the issue [is present, while] people who don’t identify don’t attend. It’s not that we need to hear; it’s that they need to hear.”

Updegrove expressed surprise at the honesty and candidness of some of the students who spoke.

“One thing that was striking was that I had never thought before about [the fact that] there is no real advocate for lower-income students on campus,” Updegrove said. “We have an Associate Dean for International [Student Affairs], we have a Chief Diversity Officer, we have a therapist for sexual assault, we have religious chaplains, but at the end of the day, there’s no advocate for people who are first-generation college students or whose parents are low-income. The Wesleyan experience is very different from what we experienced in high school, and they, or we, aren’t necessarily prepared for what we found here. And that’s a problem that I think could be solved.”

Adams articulated the need for participants from a wider range of backgrounds at these sorts of forums.

“Though I do like seeing students, I would like some faculty to be present,” Adams said. “Even if they are seen and not heard…it’s important for [professors] to hear how students are impacted by some of their decisions or their behavior.”

Adams described his personal experiences with class discrimination on campus.

“All of this frustration comes from not being heard and feeling like you’re still being excluded from the Wesleyan experience,” Adams said. “I’m pretty sure whoever is paying the other $58,000 out of [my tuition]…wouldn’t be happily giving me that 58 grand if they knew the shit I was going through. They’re not going to go, ‘I’m going to give all my money to you so that you can come here and feel more oppressed than you did before you got here.’”

Almost every student at the forum spoke at least once, talking about how socioeconomic backgrounds have affected their college experiences.

“I felt like there was a lot of interesting stuff that came up in this discussion that, as someone who considers [herself] relatively privileged, I [had] not previously known, and I feel like the campus as a whole doesn’t know,” said Carolyn Tusa ’14. “How do I, and we, collectively translate this discussion into institutional and cultural change? Taking what we’re talking about and putting it into some sort of policy is really encouraging, and I have hope.”

Kai Leshne ’16 noted the importance of self-examination for the continuation of this discussion on class dynamics.

“I think that [we] as the Wesleyan community should really take a step back and look at all our privilege and recognize it,” Leshne said. “For example, some people working on campus are not as privileged as we are…and we should really be bringing them to the forefront of [this conversation].”

Overall, attendees reacted positively to the conversation. Some students stayed after the official forum had ended, continuing the discussion in a more casual setting. These students expressed the need for open dialogue on privilege and class on a larger scale.

The second session in the five-part series, held on Monday, Oct. 14, focused on ability and wellness. The third session, “Privilege, Race, & Policy,” will be held on Thursday, Oct. 24 at the Malcolm X House at 345 High St.