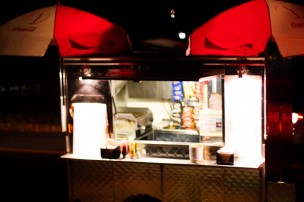 Artisanal grilled cheese and savory falafel, make room for some sizzling hot dogs. Joining the fleet of food trucks on and around High Street is Dave’s Hot Diggity Dogs, a family-run food cart that caters to the late-night cravings of Wesleyan University students and Middletown residents. From gooey cheese dogs to steaming sandwiches, the motorized cart carries the all-American classics.

The Rogalski family, founders of Hot Diggity Dogs, began running the enterprise in its current location two months ago, though the history of the business stretches farther back. In 2000, David Rogalski Sr. stationed the wagon at the corner of Main and Court streets, where he conducted most of his transactions. During its fledgling stages, the cart also spent some time on High Street before going through a brief period of inactivity prior to its recent reopening.

Rogalski enlists the culinary expertise of his son, David Rogalski Jr., who works the burners during the late evening hours. When Rogalski Jr. isn’t serving up hot dogs by College Row, he’s working as a full-time chef at Blackbird Tavern in Middlefield, Conn.

Some students have lauded the cart’s return.

“In spite of the cart’s small size, there’s a surprising amount of variety,” said Courtney Laermer ’17. “They definitely accommodate different tastes, and on top of that, the owners are super friendly.”

Students at the University aren’t the only ones taking advantage of this new late-night dining option. Even Middletown residents have embraced the cart and the options it offers.

“I come here late at night, and I get bacon and a runny egg,” said resident Thomas Hirsch, who has been living in Middletown for seven years. “They use all top-quality foods, and they don’t cheat you on anything. It’s really delicious.”

According to Rogalski, the wagon’s most popular items include the steak, egg, and cheese dog and the Dave steak, which consists of onions, peppers, bacon, mushrooms, jalapeños, cheddar cheese, and hot sauce.

Since the cart’s inception, Rogalski said that one of the biggest transitions has been expanding the forms of payment they accept, which makes the cart accessible to a wider array of customers. In comparison to its former Main Street location, at its new location Rogalski reported an overall improvement in business.

“A lot of kids carry credit cards, and we do accept Visa, Mastercard, and Discover,” Rogalski said. 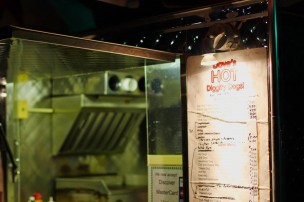 In addition to its Friday and Saturday High Street operation, Dave’s Hot Diggity Dogs caters events ranging from birthday parties to community events. The cart is even getting involved with Middletown Public Schools this month.

“We did the Fourth of July downtown, and we’re doing Moody School’s Halloween party in two weeks from now,” said Rogalski. “We really do anything.”

“Hopefully, we’ll get our name out, expand the truck, and get more items,” said Rogalski. “We just want to thrive and have fun doing what we do.”