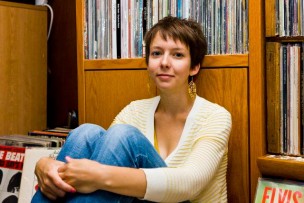 Visiting Assistant Professor of Music Elizabeth Lindau is making her mark at Wesleyan, even if her time here is limited. She’s on campus for a year, teaching music theory classes this fall and musicology classes in the spring. While teaching the building blocks of melodies, Lindau also researches and writes about pop music and the avant-garde. Lindau sat down with The Argus in her Music Studios office to talk about boredom, repetition, the Velvet Underground, and how they all intersect.

The Argus: What’s on your bookshelf?

Elizabeth Lindau: Let’s see. Here’s the organization: Top shelf is scores, with a few anthologies and some popular music stuff; and then music books; and at the very end of the shelf, a bunch of books I’m looking forward to reading that are all about boredom, for some research I’m doing about boredom. And then stuff from the library, various stuff for class and the things I’m working on. I’m teaching music theory this semester, and so here are my music theory books. And then on this little shelf are art books and philosophy and feminist theory.

A: How did you end up at Wesleyan?

EL: As I understand it, a couple of years ago, there was another professor, Yonatan Malin, and he was the theory professor. He left to take a different job, and it often takes a while for the department to get approved to do another tenure-track hire. They hired this other guy, Daniel Wu, but then he got a tenure-track job in China, so he was here last year teaching [MUSC]103 and the other class I’m teaching. So at the end of the spring, they did a search for someone to teach music theory, and I took that job.
I’m only here for a year because they are doing a search for someone permanent, and they want someone who works on a different type of music than I work on, so they’re going to get someone different who’s a better permanent fixture for the department, and I will hopefully get a job somewhere else.

A: What type of music do you work on?

EL: I work on popular music, and I work on experimental music, and most of my research is about the intersections between those two things. In terms of my bookshelf, I’ve got a whole bunch of books up there about Yoko Ono. I just gave a colloquium last week about Yoko Ono, who, of course, was an artist affiliated with Fluxus, which is an avant-garde movement of the 1960s, before she became involved with John Lennon, and then, of course, she became a public figure and also a popular musician throughout the late ’60s and 1970s and on up until today. She just released an album this month. She’s an example of someone I’m interested in, as someone who kind of spans both the avant-garde and the rock world.

A: How did you become interested in that specific subject?

EL: Originally, eons ago when I was a music student, I went to the University of Illinois, where they have quite a large composition department and a lot of people working on experimental music, writing music with computers, building instruments. I got exposed to that when I was an undergraduate, and I’m sure a lot of Wesleyan students have a similar experience being here. When I decided I wanted to go to graduate school for musicology, that was what I wanted to study.
Then I got my Ph.D. at the University of Virginia, which has been a center for popular music studies. I had a lot of grad student colleagues who were also writing dissertations about popular music. And I think before I went to graduate school, I didn’t know that that could be a serious pursuit, that there were people who were scholars who were taking popular music really seriously and thinking about its cultural context or doing formal analyses about popular music. I didn’t know that existed as an undergraduate, so I think my exposure to that in graduate school combined with the interest I’d developed as an undergraduate led to my research area.

A: Besides Yoko Ono, what else has your research centered on?

EL: I’m working on an article that’s about an album called My Life in the Bush of Ghosts, which is a collaboration between Brian Eno and David Byrne. Brian Eno, of course, was the pioneer of ambient music, and David Byrne was the front man of the Talking Heads, and this is an album they did in the late ’70s and released in 1981, and it’s kind of an early example of sampling. It’s sort of a “primitive” version of sampling, and most of the music it samples comes from field recordings of non-Western music or of non-Western popular music, so there’s a track that samples Koranic chant, which had to be cut from the album because that was very controversial, and there are tracks that use spirituals sung by the Gullah people, in the Georgia Sea Islands off the coast of this country.
I have a piece coming out that’s about Sonic Youth and their performances of graphic and indeterminate scores. It’s not stuff where it’s little dots on staves; it might be just a prose instruction, or there might be some small shapes with instructions you have to interpret. So they did an album where they perform a lot of post-1950 pieces that have nonstandard notation.
I’m also working on some stuff about The Velvet Underground, and that work is basically about The Velvet Underground, boredom, repetition, and drone, and Andy Warhol. Sort of all those things wrapped up.

A: Obviously Andy Warhol and repetition have a lot to do with each other, but can you tell me more about how boredom factors into that?

EL: That’s what I’m trying to figure out. One of the famous things that gets quoted that Warhol said was, “I like boring things.” That was something he was often quoted as saying. Boredom is kind of an important trait of a lot of avant-garde artworks. I think it’s one major experience with the avant-garde, especially in the 1960s. Often you have, say, a piece of music where it’s a violinist playing a perfect fifth.
The Velvet Underground came out of this group called the Theatre of Eternal Music, also called The Dream Syndicate sometimes. John Cale, the violist in The Velvet Underground, was a member of this ensemble. That ensemble was all about sustaining long tones for a long time. They might begin a concert before the audience arrived, so the audience would arrive and the performers are already performing this long, droning music where nothing much seems to happen, and then the audience would eventually leave because it had lasted an hour and nothing had happened.
So Theatre of Eternal Music was about a lot of things, but one essential element was the drone: a long, sustained sound. The idea behind that is once you subject yourself to music like that, you start to realize that it’s not actually that boring. It seems like that might be quite boring, but you start to hear all of these acoustical by-products of the sound. You hear, if it’s a violinist playing a perfect fifth, of course there are going to be changes of bow. Maybe the person doesn’t maintain their pitch absolutely completely; maybe they’re performing along with a singer who’s also singing the same tones but there are slight clashes. Actually what should be very boring becomes very interesting, and something that is infinitely varied, because there’s no such thing as a long, unchanging sound. There’s no such thing as a total drone.
Repetitiousness is another thing that can create boredom, which Warhol knew. [You can] think of musical repetition on a kind of continuum, where on one end you have a long, unchanging sound, or a total silence—which of course John Cage says doesn’t exist; silence is just the absence of intentional sound—but if you could have a long silence, or just something that would be totally unchanging with no other sound, that would be one end of this continuum of musical repetition.
And on the other end, you have an infinite set, music where no sound was repeated exactly, where no pitch was repeated, where everything was always different. Most music falls somewhere in between—like in a pop song, where you have a verse and a chorus. Verse is A and chorus is B, and the song alternates between those two things. If you have musical repetition, that’s just “A A A” repeating over again, and there are actually a lot of pop songs that tend to do that, and there’s minimalist music that does that, a single thing repeated.
I think, in the avant-garde generally, there’s a huge interest in either something that drones, that’s long and unchanging, or in repetition. In Warhol, you have an interest in repetition: the soup cans, or the Elvises. And of course a lot of these are pop culture things. But you can’t have exact repetition either, because if you listen to something on repeat, your relationship with it is going to change. Nothing is ever exactly the same.
So I’m interested in how those three things—something that seems like an unchanging drone, something that is a single thing repeated over and over again, and the thing that’s infinitely varied—how, depending on your perception, we can experience those as all being similar.
I think a lot of that happens in The Velvet Underground’s music. In particular, I’m looking at this film that Warhol made of them rehearsing in The Factory. It’s an hour-long jam over a single harmony; the harmony never changes. This is a film that was unearthed in the ’90s, and everyone was like, “Oh, lost footage of The Velvet Underground!” And then everyone was like, “This is so dull. They’re not playing ‘Heroin’” or some classic song, and so everyone was so disappointed.
All these things should be boring, but if you give yourself up to it and observe it, it becomes extremely interesting. I think that’s something that minimalists know, that’s something that Warhol knows, and I think The Velvets are also part of that.

A: Your research centers around pop music, but not pop as in commercially successful in any way. Is that a conscious definition or is it simply non-classical?

EL: I like to joke that I write about unpopular popular music. When scholars say, “I’m a popular music scholar,” basically they’re defining popular music very broadly as anything that is mass-produced and ostensibly intended for a wide audience. Even the things I’m writing about, like the early John Lennon and Yoko Ono stuff, which is widely hated, they did press many copies of those records, so it is mass produced. One part of doing music that is experimental or avant-garde is that it’s often going to be something challenging or a little bit difficult, and that’s going to be less likely to have a mass appeal.
I’ve also selected the things I’ve selected because, basically, my grand theory is that popular music has the potential to address some problems that we encounter in scholarship that have to do with avant-gardism. I think that pop music isn’t just repeating these things that composers and artists have done, but it’s often adding something new to the discussion. It’s not just rock bands stealing from high artists.
For this particular project, basically I’ve selected things I think are engaged with avant-garde ideas in a meaningful and critical way. I wouldn’t want my work to be interpreted as, “Look what The Velvet Underground learned from the Theatre of Eternal Music or Andy Warhol.” It’s more about what minimalist composition or repetitious music practice has learned from what The Velvet Underground did. It’s not just high and low; the so-called “low” art often informs or adds to what has been done in these other, more elite spheres.