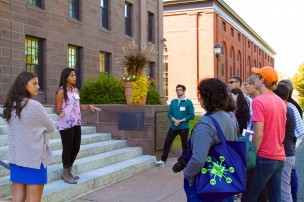 Ever since wrapping up the college process last year (if memory serves, that included ceremoniously recycling the enormous packets of information that accumulated in my desk drawer over the previous two years), I’ve tried to block out the trivia-packed tours, tedious information sessions, and awkward interviews of my past. But when I walked into the Office of Admission this Wednesday posing as a prospective student, it all came rushing back. The business casual. The hefty course catalogues on display. The quiet mood music playing softly in the background. I created a high-school alias and filled out a small blue card, and then my tour was off. It was a quiet day, and I was the only “pre-frosh.” What follows is a sub-textual, unofficial transcript of my “campus visit.”

Yeah, no problem, the tour will start in a few minutes. Go ahead—take a look at the pamphlets and information sheets artfully arranged on the mahogany table. While you’re at it, have some water and make yourself comfortable. Here at Wesleyan, we’re really into water. And comfort. Oh, and fill out one of these blue cards—it’s just so we can keep track of your information.

This will be more of a conversation, since it’s only the two of us—yeah, I also thought that the tense-looking girl in the skirt suit and clogs might be here for the tour, but it turned out she’s just having an interview.

I guess I should start by telling you a little bit about myself. I’m a major in two impressive things, and I’m also a member of four sports clubs and three publications here on campus. Right now we’re walking through the Center for the Arts—we affectionately refer to it as the CFA—and I know it looks like LEGO buildings, but you’ll grow to love it.

I think that something like 40 percent of graduates have taken dance classes. We have a real spirit of inclusivity here at Wesleyan. Me? No, I’ve never taken a dance class, but one of my friends was in West African Dance last semester. She said it was amazing.

Right now we’re crossing Wyllys Avenue—the cars always stop for pedestrians here; everyone is so friendly—and we’ll be continuing along College Row. This is where the class deans’ offices are. They’re here to be leaders, counselors, and even parental figures. One of my friends was really sick one semester and missed a bunch of work. So she met with her dean to make a game plan for catching up. When she went back at her dorm room later that night, there was a care package with chicken soup and tea waiting for her. [Meaningful pause.]

On to standard academic details. The average class size is 19, though there are often fewer students in classes. Because of the open curriculum and lack of formal distribution requirements, one can be assured that each of the other 18 students in hir class is enthusiastic about being there.

We have nine hundred courses each semester and 44 majors, and 100 percent of classes are taught by professors. They really just want to get to know you and know what makes you tick. Here at Wesleyan, our professors won’t only take you out for fair-trade coffee; they’ll bake you seitan hash in a pit in their backyard.

The Memorial Chapel hasn’t been affiliated with any particular religious organization since 1911, when the University broke from the Methodist Church. Now, the Chapel’s biggest event is Wesleyan Thinks Big. It’s like our version of TED Talks.

Judd Hall was the first building at Wesleyan devoted to undergraduate research. Yeah, it’s pretty, right? It’s a symbol of continuing education here at Wesleyan. A funny story, actually: Professor Atwater was working in the basement of Judd Hall, trying to determine the nutritional content of beer. In doing this, he actually stumbled upon the discovery of the food calorie. So when you’re eating something and see the calorie content, you have Wesleyan’s own Professor Atwater to thank—or blame. [Pause for laughter.]

Now seems like a good time to mention our engagement with the Middletown Community because I hear sirens, and you might be getting nervous. You might have noticed that Wesleyan is an open campus, with no gates or fences. Middletown residents can be seen walking their dogs, taking advantage of the open gym hours, or attending performances at the CFA.

Now we’re passing by Allbritton—yeah, isn’t it pretty?—and heading up toward Olin. It’s got 1.3 million physical volumes, but if that’s not enough reading material for you, we have an interlibrary loan system with Trinity College in Hartford and Connecticut College down in New London.

No, actually, the library isn’t open 24 hours because, as I was saying, it’s really important here to get out, get to know your classmates, or get involved with Middletown.

This is Exley, the science center. Wesleyan is considered one of the best, if not the best, liberal arts colleges in science. And that’s because of our 300 graduate students: we’re eligible for research grants, but because they’re so few in number, many of those resources trickle down. If calculus makes you want to break out in hives, you can take advantage of our science and math courses for non-majors.

Over there? That’s Pi Café. I really think they should start selling pie for three dollars and 14 cents, just as a novelty item—it’s a lot for a piece of pie, but I’d buy it.

Here are the senior houses. As a rule of thumb, anything with a red door is Wesleyan-owned. Look, this is really nice: it’s like living in a little Wesleyan suburbia, only without the SUVs and labradoodles.

When did Wesleyan go co-ed? That’s actually a funny story—and I’m prepared to acknowledge and honor it in order to move past it. We were originally co-ed—it was “Wesleyan’s Great Experiment”—but started excluding women in 1911. People say the women were making the men look bad. When you go into Freeman, you see the pictures on the walls of all the teams, right? Up until the 1970s, when we started admitting women, everybody’s scowling. In the 1970s, everybody’s happy!

Hey, you, walking out of Bennet: Could you possibly let us in? Someone was supposed to give me a key card, but either they didn’t put it back, or—oh, you have to get to football practice. No problem. We’ll see if someone on the other side can help us. I’ll keep talking breezily so we can pretend that didn’t happen. People here at Wesleyan are just so friendly.

We’ll just pass briefly by the observatory. Amherst built theirs a few years before we did, and because we’re so mature, when we built ours we made the telescopes two inches bigger. That’s an oft-overlooked method to choose a college: by telescope size.

Oh, so yeah, this is Foss Hill. Right now it’s Foss weather, so you’ll see a lot of people reading or napping out here. Once I saw a guy roll up the hill. It was actually pretty impressive—and in the spirit of fun, of course. No illegal substances were involved, because here at Wesleyan we respect Connecticut state law.

I’ll invite you to fill out one of the cards once we get back to the Admissions office. If you liked the tour, again my name is Tour Guide, and if you didn’t like the tour, my name is Other Tour Guide. [Pause for laughter.] Thanks so much for visiting with us. Best of luck in the college process.